Round 4 Feature Match - Just For Men versus Sufficiently Randomized 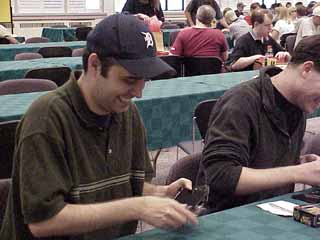 I talked to Pikula before the round and he seemed very confident: "We should go 6-0. Our decks are crazy." When Shvartsman found out about his team's feature match he started trash talking immediately saying "We got a bye! How long has it been since Pikula played Magic?"

Pikula Ritualed out a turn 1 Belbe's Percher in the first game. Shvartsman played a turn 2 Mike Long (Rootwater Thief), which Pikula (Greel's) Caressed so it couldn't deal any damage. Shvartsman got an active Waterfront Bouncer, but he was hesitant to use it. Shvartsman eventually had to use it on a Primeval Shambler, and Pikula immediately destroyed it with Snuff Out. Pikula had an Intimidator running in addition to that Shambler and Shvartsman was in trouble. Immediately before conceding, Shvartsman Disenchanted Greel's Caress so he could attack once with Rootwater Thief and look through Pikula's deck. After a quick scan, Shvartsman announced to his teammates "You guys need to go 2-0." 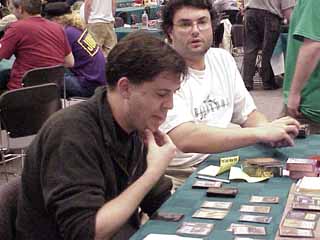 Ben Murray has the middle seat on Just For Men. He took an amazing blue/white deck into battle against Brian Kibler's merely decent black/white. Murray is an actor from New York who has qualified for the Pro Tour five times, but various travel commitments have prevented him from ever attending. New York City is rapidly reestablishing itself as one of the hot cities for Magic. With Finkel and the O's once again attending Neutral Ground in a regular basis, expect the quality of play from all 'Grounders (including Ben Murray) to rise in the coming months. 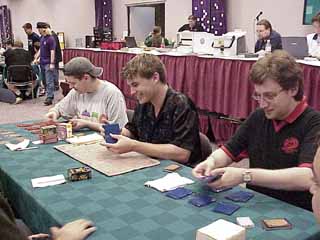 Murray played game 1 flawlessly. Both players came out with aggressive draws and it was Murray's fliers racing against Kibler's Fen Stalker et al. Murray calmly played out fliers while and took damage while establishing board position. He had Defender en-Vec in his hand the whole game and timed it perfectly. When he finally dropped the Defender it decisively won him the race.

Alex Balandin is the third on Just For Men. Balandin is Jon Finkel's poker mentor. Finkel, in turn, has been teaching Balandin to play Magic. As of a month ago Balandin sill hadn't seen most of the cards in the Masques block, but his natural talent as a card player and a smart guy has allowed him to pick the game up quickly. All the talent in the world couldn't help him take game 1 of a red/green mirror match from Mike Bregoli.

Pikula came out strong in his second game against Shvartsman. Pikula used Dark Ritual to play Phyrexian Slaver on the 4th turn and then played out Primeval Shambler on turn 5. That's a beating against blue/white! Shvartsman wasn't intimidated. Shvartsman played Waterfront Bouncer on turn 5 and then, after drawing Daze on his next turn and with Pikula tapped out, Shvartsman played Alexi's Cloak on the Bouncer. Once the Bouncer was safely protected, he put the Bouncer to work. Shvartsman locked the Shambler with Stinging Barrier, basically forcing Pikula to pump it up to 4/4. Then Shvartsman bounced it. Pikula played land #6 and tapped out to replay the Shambler. That's exactly what Shvartsman was planning for - Daze dealt with the Shambler. On his next turn Shvartsman was able to leave up enough mana to Bouncer the 5/5 Slaver and then counter it with Rethink. Finally, Alex had time to ping Molting Harpy with the Barrier and draw 3 cards with Rhystic Scrying. The Scrying plus a Gush kept plenty of cards in his hand to fuel the Bouncer and Shvartsman won going away. It was a beautifully played game.

Game 3 was not as good for Alex. He did get to Daze a Battlefield Percher and then Thwart a Slaver, but Pikula destroyed all the creatures Shvartsman played and just beat him down with random small creatures. Well, Agent of Shauku isn't exactly "random." Pikula won the match 2-1. 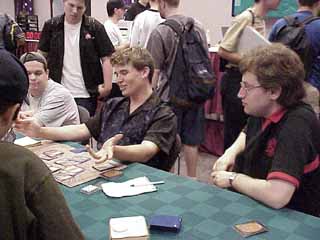 Meanwhile there were only 10 minutes left in the round and both his teammates were in game 2. Balandin eventually succumbed to Bregoli's red/green beats but Murray was in control against Kibler. Up a game and in control of game 2, things looked good. Kibler made his situation worse by misunderstanding how his on Cho-Manno's Blessing worked. When Murray Misdirected it onto Murray's own Nightwind Glider, Kibler thought he was already committed to "white." He actually gets to choose on resolution and since he controls the enchantment he gets to choose the color even if the Blessing is enchanting Murray's creature. The Pro-white/Pro-black Glider would eventually have won Murray the game but time ran out first and Murray won the match 1-0.