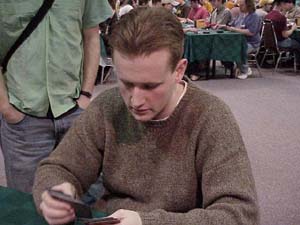 Justin Schneider laughed when he sat down for a round 4 feature match against reigning Player of the Year Bob Maher, shaking his hand and saying, "Congratulations - I'm not kidding, you're gonna laugh when you see what I'm playing." Schneider was once a PT wunderkind, winning the Junior World Championship back in 1996 playing a Prison deck handed to him by his mentor, Mike Long. Schneider walked away from the game for a while, but reading event coverage on the Sideboard got him excited again. Two Grand Pris later and he's not just requalified for the Pro Tour, but appearing in Sideboard coverage of his own.

Justin also congratulated Maher on Bob's upcoming wedding next weekend. Justin commented that his own brother - Wizards R&D member Brian Schneider - is also getting married soon and so the pressure is off him. "I can be the bad son now!" Justin ran a controllish white/blue/black sealed deck with lots of fliers against Maher's black/red/green. 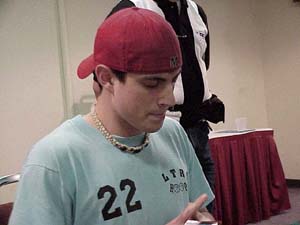 Schneider's deck looked perfectly reasonable early in game 1 -- turn 2 Dream Thrush, turn 3 Hobble (on Yavimaya Barbarian), and turn 4 Razorfoot Griffin put Maher on a fast clock. Sea Snidd came down to block on the ground and then Justin used Dream Thrush to create a Forest so he could play Ordered Migration for four! Lava Zombie and Duskwalker just couldn't race Schneider's 7 power worth of fliers, especially since Schneider had Prohibit in his hand and plenty of mana untapped.

Maher elected to draw in game 2, and Schneider started aggressively with turn 2 Spirit Weaver, turn 3 Dream Thrush, and turn 4 Razorfoot Griffin. The Griffin held off Bob's Vicious Kavu nicely and all Maher could do was use it to gate Lava Zombie into play. Schneider enchanted the zombie with Essence Leak and Maher had to let it go. Maher played turn 5 Thunderscape Battlemage with the black kicker, knocking the last two cards out of Schneider's hand (Exotic Curse and Silver Drake) and seemed like he might be able to stabilize, but the top of Justin's deck was very good to him - it delivered up Ordered Migration! Maher's jaw dropped "What?! Nice draw . . . yeah, ok, you win."