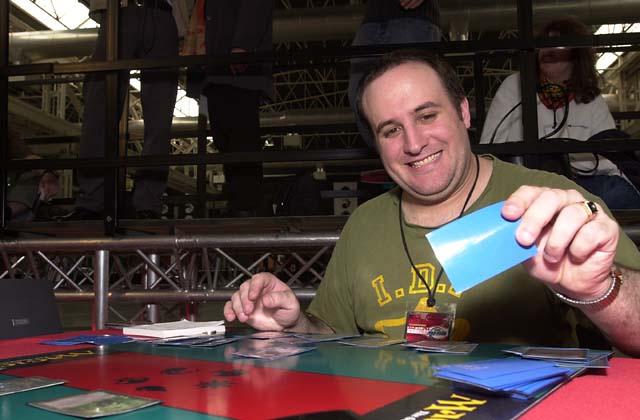 Gary Wise summarized his round 4 Feature Match very simply "he has a better deck, but I have good cards against him." Kai Budde answered "very true." Budde still has nightmares about their last match - at Grand Pix Amsterdam - where Wise went "Recoil your land, Recoil your land, Probe with kicker, Probe with kicker, Crosis!" The two friends have tested together for several Pro Tours and Wise has spent some time staying in Germany hanging out with the "German Juggernaut."

Wise swears by black and blue in Invasion/Planeshift draft. He drafted those two colors (plus a splash of red) even though both of his neighbors were also playing black-blue. He wound up with a reasonable deck anyway and was 2-1 going into round 3. Budde was the only green-white player at the entire table and wound up with a spectacularly aggressive deck sporting seven 2-mana, 2-power creatures (known affectionately as "bears" to PT players everywhere) plus two Charging Trolls (which he drafted 4th and 7th) and an Armadillo Cloak. Budde was 3-0 before the round began, including a win over Antoine Ruel's Crosis/Flametongue Kavu deck, which had dealt Wise his first loss. 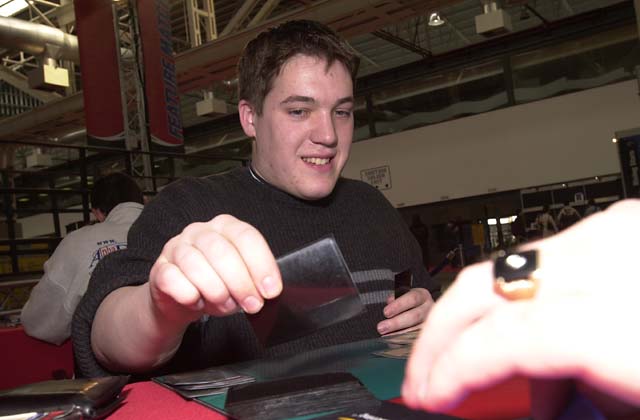 The players raced through their turns as only friends can. Wise tried to trade his Slingshot Goblin for Budde's Nomadic Elf, but Budde had Fleetfoot Panther ready to save his Elf after damage went on the stack. After replaying the Elf, Budde watched as Wise played his fifth land and asked him "Hunting Drake?" Wise answered "not yet" and bounced his Phyrexian Slayer so he could get Cavern Harpy into play. Budde enchanted his Elf with Armadillo Cloak and Wise still didn't have any answer. With 56 minutes and 35 seconds left in the match, the players were already done with game 1.

Game 2 was equally vicious. Budde played out Thornscape Apprentice, Thornscape Familiar, Quirion Sentinel, Llanowar Knight, and Armadillo Cloak all before turn 5. Wise had the Hunting Drake this time (and Cavern Harpy to potentially recur it), but he was dead before he drew his 5th land. The clock read 51:31 when the match ended and they started playing fun games. Budde won both the fun games too and Wise stuck out his hand to congratulate Budde on drafting "the best green-white deck I've ever seen."