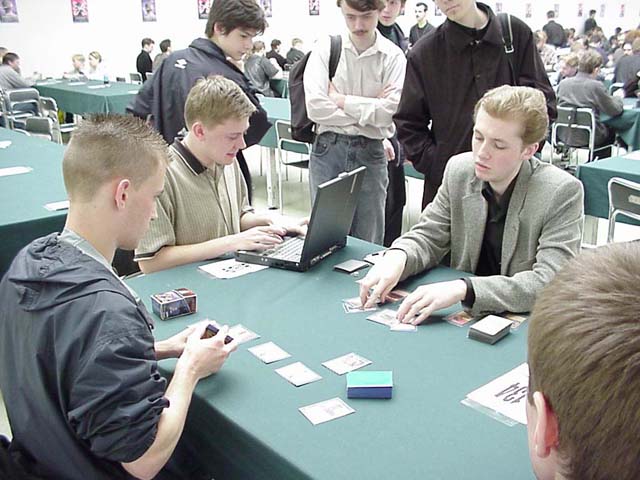 Both of these players only had two byes, but managed to defeat their third round opponents. They have each had some success on the European Grand Prix circuit this year, with a number of top 32 performances by Firsov and two top eights for Canu.

Franck was playing Go-Mar similar to what he ran in Tokyo, with some small changes. Firsov was running a fairly standard red/green deck, with only two Flametongue Kavus in the main deck.

Konstantin started off quickly with a second turn Blurred Mongoose and Canu played a Meddling Mage. The two creatures traded and Konstantin didn't have a play on turn three or four, with only land and a couple of Urza's Rages in hand. He finally found a Thornscape Familiar to summon on his fifth turn, but Canu was feeling good as he was still on twenty life.

A Fact or Fiction netted the Frenchman three land over a land and a Meddling Mage. He had a couple of Dromar's Charms in hand along with a Teferi's Moat and a Galina's Knight.

After taking a couple of hits from the Thornscape Familiar, Canu traded it with a Galina's Knight. He took two from a Thornscape Battlemage, but countered the Russian's attempt to summon a second with Absorb. A Skizzik was also countered by Dromar's Charm, and the Frenchman looked to have the game locked up when he summoned dromar the banisher.

Konstantin didn't have an answer to the Dragon and had to watch as his Battlemage was returned to his hand along with a Jade Leech that he had just rather futilely summoned. The next turn gave Konstantin his sixth land and allowed him to cast two Urza's Rages and kill the 6/6 flyer.

Canu did nothing except play a Galina's Knight, and Konstantin recast the Battlemage in an attempt to remove it. Franck responded with a Fact or Fiction, which again gave him four lands. The other card was an Absorb however, but with a Teferi's Moat in his hand Franck decided not to counter the Battlemage. 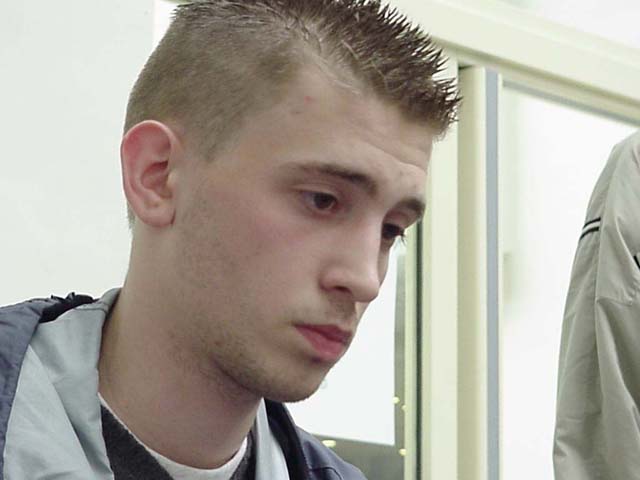 He did finally cast the Moat, naming green, and asking Konstantin whether he wanted to concede. Firsov politely declined, but with a green Moat in play he was sure to struggle, and he killed his own Battlemage with a Flametongue Kavu to get a creature that could attack into play.

The Kavu didn't last long enough to try to attack, as it was Dromar's Charmed. This reduced Konstantin to shooting Franck with green creatures via a Keldon Necropolis. With Absorbs and Dromar's Charms in Canu's deck, such an assault was almost assured of failure. Eventually the Russian ran out of creatures, and Franck started to attack with a Galina's Knight. He Absorbed Firsov's attempts to Ghitu Fire him out. Eventually Franck found another Dromar and the game ended fairly quickly thereafter.

Konstantin brought in a full complement of Kavu Chameleons, taking out Thornscape Battlemage, and Flametongue Kavu, as well as bringing in Thunderscape Battlemages to try and deal with Teferi's Moats. Franck had actually sided out two of his Moats, along with Lobotomy, to bring in Prison Barricades. He had Riptide Crabs to do the same job in Tokyo, but the Barricades are presumably better as they give you the chance to play them on turn two and then counter on turn three.

Of course Firsov chose to start in the second game as well, laying a second turn Thornscape Familiar. Canu had a second turn Meddling Mage, naming Raging Kavu to stop Konstantin from bringing the beats on his turn three.

Firsov played a Skizzik without kicker instead, and Franck took the damage from it, trading his Meddling Mage with Thornscape Familiar. He then used Dromar's Charm to regain the life lost to the Skizzik.

Konstantin played a pair of Blurred Mongooses, and Canu could only deal with one of them by blocking with a Galina's Knight. Despite being relatively high on life, Franck was stuck on three mana, and didn't have a Counterspell for Firsov's 5/5 Kavu Titan. Ironically he drew a counter immediately afterwards, which was totally useless since Konstantin's next play was a Kavu Chameleon. Still without a fourth land the Frenchman had to scoop, as Firsov was preparing to swing for ten.

Canu chose to start in the third game, but the Russian had to mulligan an opening hand that contained one Mountain as it's only land. His second draw was considerably better, three lands, a Thornscape Familiar, and two Thunderscape Battlemages.

Franck played a Galina's Knight on his second turn and Firsov replied with his Familiar. The two creatures traded and despite having nothing else to do, Konstantin chose not to play one of his Battlemages. He was probably running a little too scared of Teferi's Moat, perhaps he could have played one of them and held the other back.

This break in the action gave Canu the chance to cast a Fact or Fiction while still on twenty life, although he was facing a Kavu Chameleon just summoned by Konstantin. The Chameleon reduced Franck to sixteen as he played a Meddling Mage to prevent any more of them from being summoned. 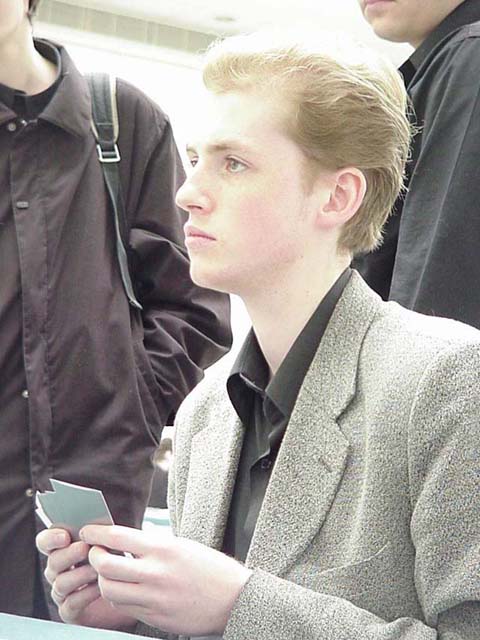 Firsov brought Franck down to twelve, but was holding back on the other things in his hand - including a Thornscape Battlemage, as he was no doubt worried about Absorb. Canu found a Prison Barricade with a Fact or Fiction, but decided to take an Opt and two lands instead, despite the fact that the Barricade would have permitted him to double-block the Kavu and kill it.

Franck played a Prison Barricade anyway as he had found a second one with his Opt. Firsov used the Urza's Rage in his hand to kill the Meddling Mage, and attacked once more. With the Meddling Mage now gone, Firsov was free to play another Chameleon, which put lethal damage on the table. This forced the Frenchman to play his Rout.

Konstantin's policy of hoarding creatures in his hand now looked good as he was able to play both a Thornscape Familiar and a Blurred Mongoose. Canu was prepared as well, he had a Galina's Knight and a Meddling Mage, and Excluded Firsov's Thornscape Battlemage. With lots of extra cards in hand, Franck could feel confident, so he named Obliterate with a second Meddling Mage 'just in case'. A Lobotomy revealed that Firsov had two Thunderscape Battlemages in his hand, and also that he didn't have any Obliterates in his deck.

Canu drew and played Dromar, the Banisher, and with only a Blurred Mongoose and a Thornscape Familiar in play. Firsov didn't draw (or in fact have anything in his deck) to deal with Dromar, so he had to concede.