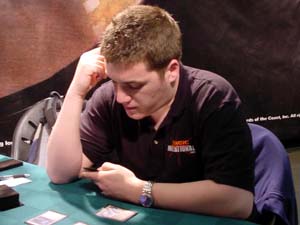 4 and the stars come out. Kai Budde ran Goblins to a disappointing finish in the German nationals and wasn't about to make the same mistake here. Today he's with arguably the best deck in the field - Ravager Affinity. Pascoli's hard work on the Onslaught block paid off with a semi-final finish at London last year. Today he's running with the popular Elf and Nail deck.

Budde won the die roll and elected to go first. He zipped out with a Darksteel Citadel and an Arcbound Worker that looked very flash with a $100 poker chip on it. Pascoli answered with a Bird of Paradise and then ramped up further with Rampant Growth. Budde did the crazy affinity thing on his third turn as a Ravager was followed into play by two Enforcers.

Pascoli clamped his own Birds for answers. A Symbiote was also fed to the 'clamp before Pascoli packed his cards in.

I did say the games were going to be short and bloody.

Pascoli managed to stumble with his land drops and had to Pyroclasm away Budde's Worker. A Forest appeared off the top of his deck though and a Wood Elf appeared to make everything good. With a Symbiote as well Pascoli was in the position to pick out every forest he needed.

Meanwhile Budde was going nowhere fast. A Thirst of Knowledge found him a Disciple but Pascoli had an Electrostatic Bolt waiting for that. He had to hope on a Somber Hoverguard as Pascoli found the bouncing Shaman combo to smash away at Budde's artefacts. A Triskelion put paid to Budde's Hoverguard and now the German was in deep trouble.

Fortunately his triple Citadel and Glimmervoid limited the damage Pascoli could do and he was able to churn out a Disciple, Ravager, Skullclamp and Welding Jar to provide some hope.

Pascoli bounced the Shaman around to get rid of the Jar and Skullclamp. Budde needed to draw Shrapnel Blast or a second Disciple. It was a Somber Hoverguard that still looked dangerous.

Pascoli's deck was running rampant though as a Pyroclasm followed by Shaman annihilated Budde's board.

The next turn Pascoli 'clamped through his guys and found the Triskelion he needed to end the game.

Budde looked at his cards and sent them straight back. Pascoli did the same, and then again.

"You might still win," Budde said, showing a hand where the only land was a Glimmervoid. As the other cards were Worker, Ravager, Disciple, Skullclamp and Welding Jar the German couldn't really be too unhappy.

Unfortunately his deck didn't look like coughing up a second land and a Worker was fed to the 'clamp to dig it out. Pascoli was doing fine on that account as Rampant Growth and then his own Skullclamp found him a Vine Trellis.

Meanwhile Budde was pulling out of the screw as a Thoughtcast found him a third land and the Ravager entered play.

Pascoli's Shaman took out only a Welding Jar, but he had an Electrostatic Bolt to make sure the Ravager stayed dead. He continued to have the answers as a Pyroclasm ripped down Budde's Hoverguard. A second Shaman smashed up Budde's Skullclamp, but the Ravager was now 5/5. He kept it at home rather than give the Italian cards by chumping with a 'clamped Shaman.

Pascoli's deck was still burning, Wood Elves fetches a Forest and then two cards off the clamp. One of which was an Oxidise for Budde's Ravager. He kept burning through his deck with the Skullclamp and Budde started shaking his head as the Symbiote appeared to set up the bouncing Shaman combo. 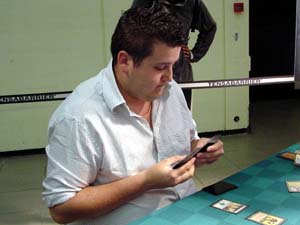 Budde dropped two Disciple's too at least make it painful to the Italian. That plan was foiled as a Triskelion pinged them off the board in the following turn. They did 4 damage but Pascoli was still safe at 12 life.

Budde scooped on the following turn. He just couldn't quite find the fourth land quick enough to burn Pascoli out with the two Shrapnel Blasts in hand.

The red addition to Pascoli's deck proved decisive as it gave him Pyroclasm to deal with Budde's Hoverguards.