Like most of the other pro players, Morita has chosen to go with Psychatog. Shiki, a Regional Champion, is playing a Trenches variant, a matchup which is being repeated again and again today. 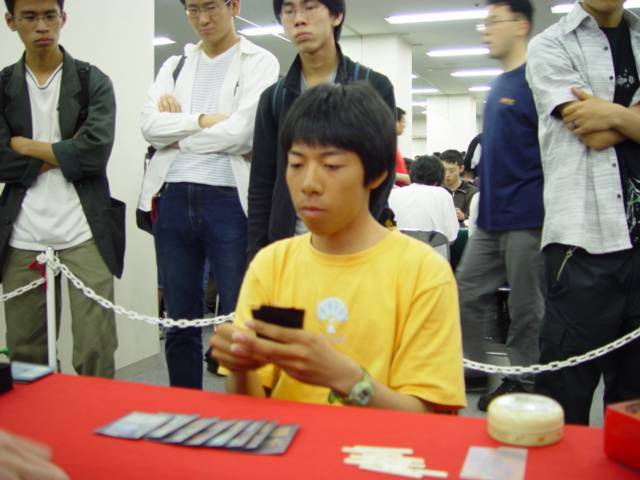 Kazumasa Shiki Game one started slowly for Morita, who missed a land drop and ended up getting his Nightscape Familiar burned by Fire. With Morita stuck at three lands, Shiki tried to play a Meddling Mage, only to have it countered. He had backup, however, and brought out another, naming Repulse. Finally drawing into lands, Morita built up his mana base for a few turns, then sparked a counter war by playing a Psychatog. On the losing end of that battle, Shiki used a main turn Fact or Fiction to draw a Flametongue, only to have Morita reset the game on the following turn with Upheaval. Both players proceeded to play conservatively, wary of each other's counterspell ability. After several turns of draw-go, Morita played a Fact or Fiction in Shiki's end phase, starting a counterspell war that drew off a few cards from both player's hands. The Fact or Fiction ended up being countered, but it was all part of the plan, as Morita dropped Psychatog during his turn, while Shiki could only look at his tapped lands and nod.

The next turn, Shiki used the same tactic, forcing through a Lightning Angel after drawing a Counterspell from Morita's hand using Meddling Mage. He conceded the following turn, however, when after having his hand stripped with a kicked Probe, Morita attacked with the Psychatog. 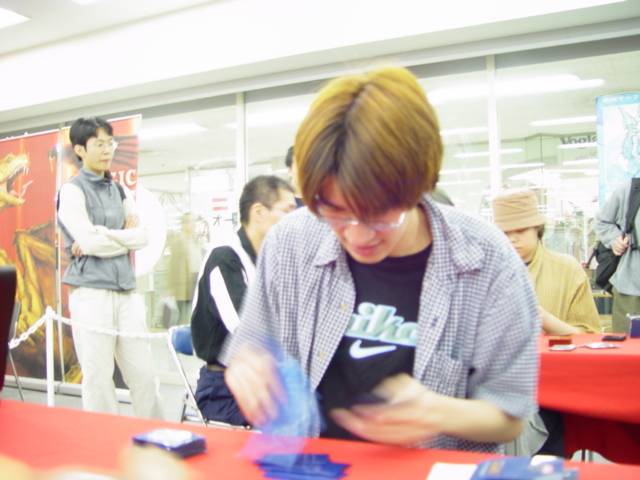 Masahiko Morita After sideboarding by both players, the second game began with draw-go for several turns. It was Morita who made the first move, Duressing Shiki and taking a Trenches. He left a Fact or Fiction there, countering it the next turn when Shiki tried to play it. Morita began riffling through his deck with Probe, Deep Analysis, and Fact or Fiction, looking for Psychatog, while Shiki merely looked on and continued to play lands. After burning through over half his deck, Morita finally found a pair of Psychatogs. Shiki countered one, but a Duress from Morita revealed that Shiki was out of tricks. Confident that his opponent couldn't stop him, Morita played Upheaval, followed by the second Psychatog, leading to Shiki's concession.