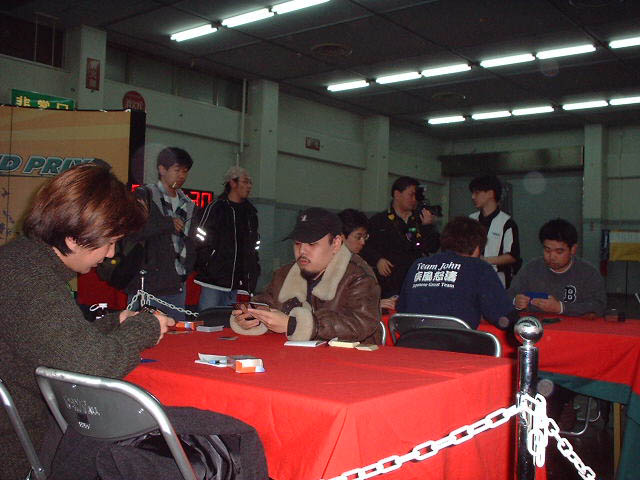 This was the first round that players with 3rd round byes actually played some Magic. This match up saw 1999 Japanese National Champion Masayuki Higashino take on local boy Takao Higaki. Higaki is recognized as one of the best players in the Hiroshima area and has attended previous Pro Tours. Masayuki is playing black/blue/red and his deck looks very strong, chocker full of the best commons available from these colors and topped off with some power rares such as Crypt Angel, Nightscape Master and Skizzik. Takao is playing green/white/blue. 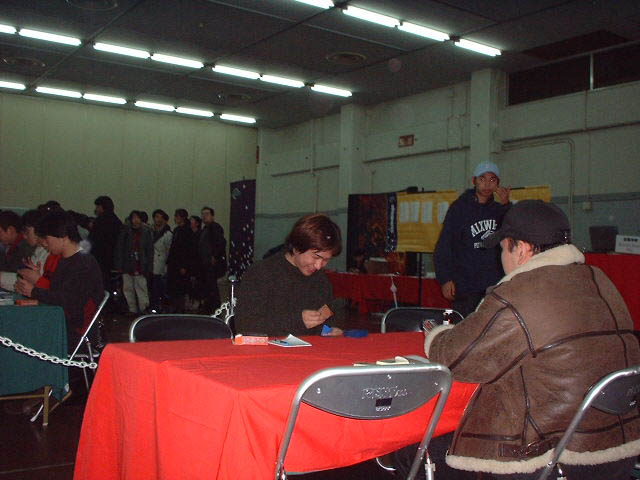 Takao finally plays a creature with an unimpressive 7th turn Nomadic Elf. The Ancient Kavu and replayed Duskwalker continue to serve the beatings and an Agonizing Demise with kicker on Takao's last hope Serpentine Kavu saw this game end in less than ten minutes.

The longest part of this match was the sideboarding with both players taking careful consideration of all the options available to them. Masayuki was having a hard time finding sub-optimal cards for this match up as his entire deck is very solid. Masayuki bought in two Shivan Zombies, one Zap and swapped a Swamp for a Mountain.

The second game began with Takao playing a 3rd turn Nomadic Elf and being stuck at two lands until turn five when he drew Plains and cast Harrow, sacrificing Forest and searching out Plains and Island, using his now two available mana to cast Benalish Trapper. Masayuki had cast a 5th turn Skizzik with kicker which had Takao on a short clock. Masayuki was shy of black mana though, holding a handful of powerful black spells. 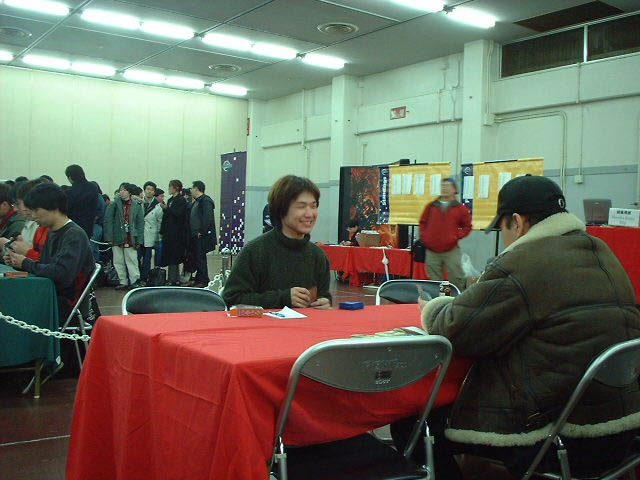 Takao's 6th turn saw him drop a Tidal Visionary and Pincer Spider to the table, the Visionary getting Zapped during end step. The cantrip from the Zap gave Masayuki the much need Swamp, allowing him to cast Hypnotic Cloud, stripping a Vodalian Serpent, Ruham Djinn and Dromar's Attendant from Takao's hand. With only one card left in Takao's hand things were looking grim for him, although he did top deck an Armadillo Cloak and cast the Serpentine Kavu he was holding, Masayuki had all the answers with a Repulse for the Cloak and a Spite/Malice for the Kavu. On Masayuki's next turn he cast Shivan Emissary with kicker taking out the Spider and Takao scoops.