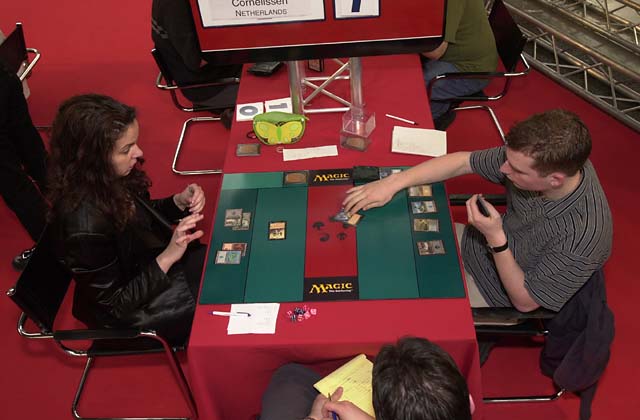 This was the first time these two modern legends had met across the Magic table, although the two were already fairly well acquainted when they sat down. Back in PT Chicago, where Kamiel placed second, they used Michelle's hotel room for some of the Top 8 photos, despite her semi-drunken state and apparent "unreadiness to accept visitors." They met again soon after when Kamiel placed second at PTLA, this time Michelle was in control, as she interviewed him for his Top 8 profile.

When I asked how many feature matches they had each received, they both answered around 15, but Michelle clarified:

Kamiel won the dice roll, and, after a very long pause announced he would play first. Kamiel kept his opening hand, but Michelle was forced to mulligan her one land hand. Her six cards weren't much better, four black spells and two Islands, but, reluctant to mulligan to five, she kept it. Kamiel showed he had no mana problems, playing an Island, Plains and Swamp on successive turns and summoned a Disciple of Kangee. Michelle, meanwhile, had missed her third turn land drop and was forced to summon an unkicked Faerie Squadron. 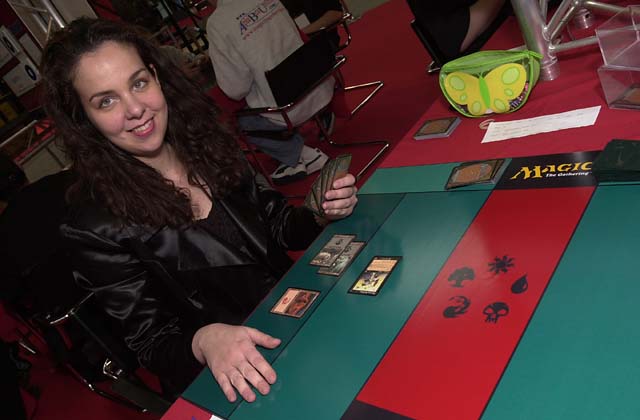 On her turn 4 she managed a third Island, which did her no good at all since all of the cards in her hand were Black and Red. This was the last land Michelle played before she died. Kamiel summoned a Morgue Toad to join the party, and between them, the Grey Ogres dealt 18 points of damage, backed up by a Metathran Transport to finish the game quickly.

During sideboarding and shuffling, Michelle voiced her determination to draw lands in game 2. She chose to play first, and both players kept their hands. Michelle played a turn 1 Battleflies, which had inflicted 4 points of damage before Kamiel made his first creature, a turn 3 Morgue Toad. Michelle missed her 4th turn land drop, and continued to attack with the Battleflies, it was a race she was winning until Kamiel tapped out on turn 5 for Armored Guardian. Still confident she could race, she killed the Toad and kept on pounding with the Battleflies. At this point, they had dealt ten points of damage. Kamiel attacked back with the Guardian to put Michelle on 14, and summoned a Stormscape Apprentice with enough mana to protect it from removal, using the Guardian. 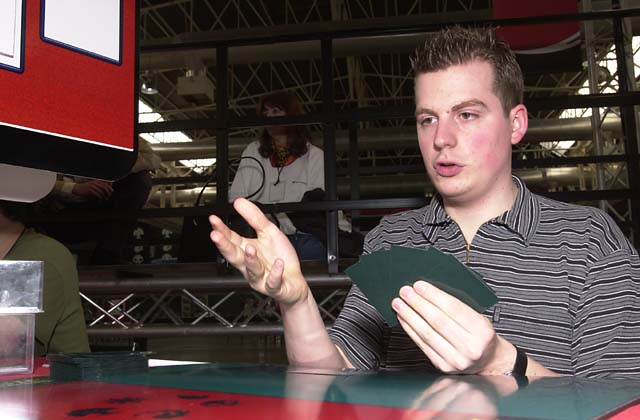 Michelle had an answer to the Guardian, however, but her attempt at Void was countered by Dromar's Charm. Kamiel summoned a Silver Drake gating the Apprentice, and held mana open for protection instead of recasting the Tapper. Michelle tried to use Plague Spores as an expensive Stone Rain to keep Kamiel's protective mana down, but Kamiel had the second Dromar's Charm, much to Michelle's chagrin. She still looked good however with 2 Soul Burns in a hand of 4 cards, and her earlier mana shortage over, that was until Kamiel cast Hypnotic Cloud with kicker taking a Bog Down, Faerie Squadron and Soulburn. She did however peel a Lightning Dart for the Silver Drake, and took the opportunity to attack with the Flies putting Kamiel on 8.

His retaliation brought Michelle down to 3, with a Guardian and Apprentice in play, and to avoid mishaps he cast Exotic Curse on the Battleflies. Michelle Soul Burned Kamiel in order to stay alive, but drew a land of the top of her deck next turn and scooped. Her mana problems and Kamiel's god draws proved too much for Michelle.