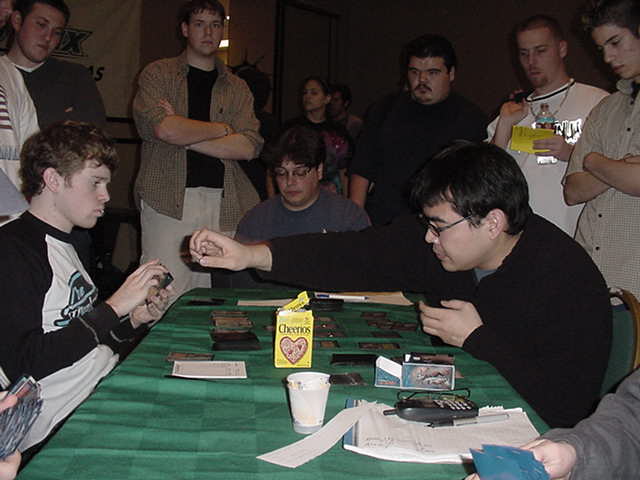 While these two have never met in a match before, they have enjoyed a couple of pizzas. This match-up featured a lot of friendly banter between rounds, but all business during them.

Mike Flores is with Malka Death, a G/B based deck, oriented around big fat green and black beasties, tons of synergy between them and the ability to recur them over and over again.

It's hard to say who has the advantage in this match-up, Flores has Dust Bowl and Choke, two cards Clegg really does not want to see, but his Fact or Fictions, if given time to get cooking, can swamp Flores under a mountain of card advantage. 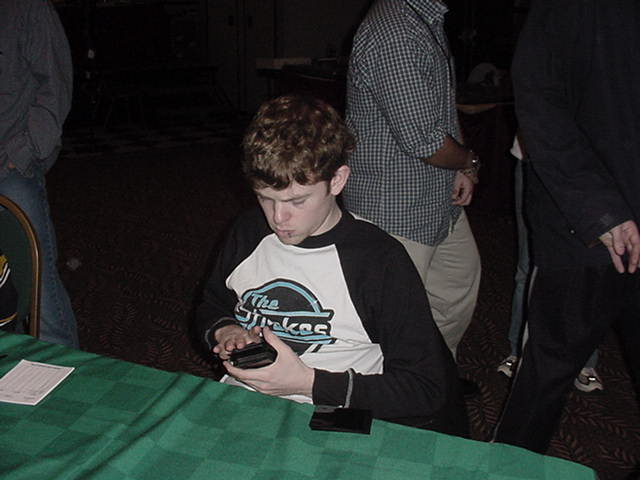 Flores started off with an onslaught of creatures, Yavimaya Elder, Spike Weaver, Phyrexian Plaguelord, SPIRIT MONGER, and each and every one was slowly, but surely met with counters from Clegg. A main-deck Choke gets cast from Flores, bringing a look of panic from Clegg, but he had the counter for it (as well as a pair of Fairy Conclaves, if it had hit). Another Spirit Monger hits on the following turn for Flores, and it rapidly brings the beats with a pair of Treetop Villages for the kill.

Between rounds as they shuffled up the apparent differences between their play styles becomes evident. BP Mike Flores has a rapid fire style, and he shuffles up quickly, with a snap to his cards. Dan Clegg is more methodical and sure, shuffling carefully.

Game two begins much less explosively, with the first play a Gaea's Blessing for Zero from Clegg. Flores rapidly developed his mana base with Wall of Roots, Yavimaya Elder and a Bird of Paradise, but no real business cards. Any attempts to put together a serious offense by Flores (small things like a pair of Spirit Mongers) resulted in a decisive nay-saying from Clegg. Anything small, Clegg was willing to let through (a pair of Phyrexian Furnaces, mana accelerators), but the big stuff kept hitting a wall of blue counter magic. A Morphling came down fairly quickly for Clegg, and it was pretty much all over, barring a few "savage tings" to BP Flores dome. 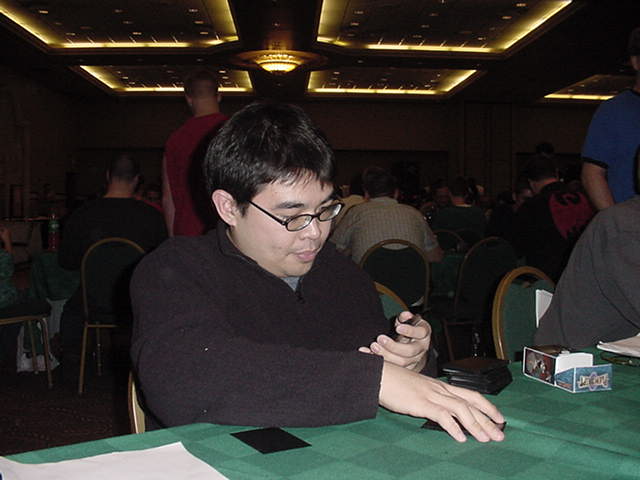 Game Three saw few sideboard changes getting made. There were less that 15 minutes to go, and Clegg's deck seems incapable of making a quick kill, so the advantage moves to Flores and his recur deck to pull him to a quick victory. They still had time for a handshake though. Flores tried to get off to another quick start, but Clegg had the answer to each threat. Well... until Choke resolved anyway. Spirit Monger looked to bring a close to the game, but Clegg decided it should be working for the other side and Treacheried it. BP had another in back up, and the ability to regenerate it. However, all those man lands helped out Clegg. While Flores could swing for six a turn, he could fire back for eleven. For perhaps the first time in Magic's history, Dan started taking it to the people and swinging for the fences for all he was worth.