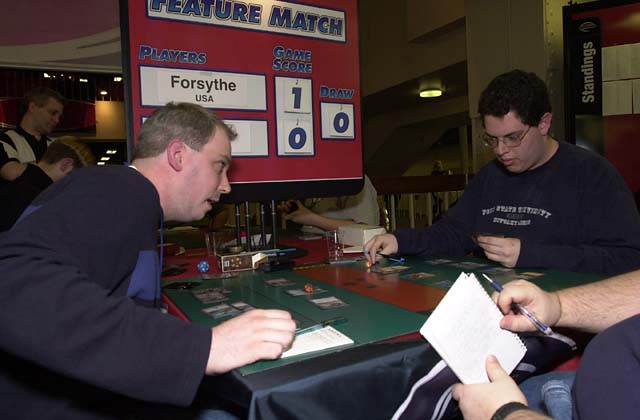 Worlds Team Champion Aaron Forsythe shook his head as he sat down to play a round 4 Feature match against teammate Pro Tour New York Champion Mike Turian. The two most famous members of the current roster of Pittsburgh-based Team CMU went into the afternoon with 2-1 records, but after this round one of them would be on the brink of elimination. Nobody wants to do that to a friend, but they both knew they had to.

Turian mulliganed before game 1 while Forsythe came out aggressively with turn 1 Tidal Visionary, turn 2 Vodalian Zombie, and turn 4 Urborg Shambler. Turian Deliver eh Zombie back to Forsythe's hand on turn 3, played Power Armor on turn 4, and finally found a creature in the form of turn 5 Shoreline Raider. Two Repulses later Turian was down to 1 and into chump block mode. Shortly thereafter the players were shuffling up for game 2.

Turian accused me of being a curse as he mulliganed again before game 2. This time, however, Forsythe didn't have an aggressive draw and couldn't punish him for it. Turian's turn 3 Samite Archer completely controlled the board. I gotta be honest here - I have no idea how Mike managed to win this game. Forsythe kept playing Vodalian Serpents and fliers and Turian never played anything bigger than a Galina's Knight, but through some combination of bounce, chump blocking, knowing when to prevent damage with Samite Archer, and knowing when to shoot with it, Turian just kept staying alive and serving with his 2/2. Turian's Glimmering Angel got enchanted with Mourning while Mike was tapped out, but two Wings of Hope later it was 2/8 and capable of blocking a Vodalian Serpent or blocking and killing a flier. A second Samite Archer prevented and dealt just enough damage for Turian to reduce Aaron to zero while he still had exactly one point of life left. 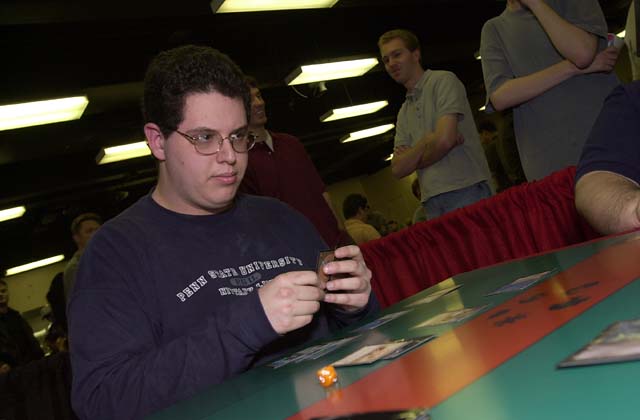 Turian's tapper slowed things down early in game 3 and his turn 5 Samite Archer looked like it would be really good against Tidal Visionary and Tower Drake. However, Forsythe had been saving Cursed Flesh, resisting the temptation to curse the Apprentice because "that stupid thing [Samite Archer] wrecks my face." Alas, Turian had the second Archer in addition, and played it on turn 6. However, Forsythe's creature damage was starting to add up at this point. He knocked Turian down to 11 and then played Urborg Emissary with kicker, bouncing the Archer before it went active. Turian played Samite Archer for the third straight turn and was under so much pressure that he also played Faerie Squadron without kicker so he could trade it with the Emissary. On his next turn Turian finally got to shoot something - Tower Drake - and also felt the need to trade Galina's Knight for Sky Weaver to preserve his last 5 points of life.

Forsythe followed up with a second go around for the Emissary (thanks to Recover), but Turian had the clutch Exclude. When Turian dropped a second tapper, he started dong his own play by play: "Turian's small but devastating army starts taking over - way to go team! His 3 1/1's were locking down Forsythe's last two creatures and Samite Archer finally turned its attention away from Aaron's creatures to his life total. Forsythe tried Repulses those tappers to sneak in a Vodalian Zombie or Duskwalker hit, but Prison Barricade plus Wings of Hope is big enough to block a Serpent. White/blue beatdown with multiple Wings of Hope looked pretty good in this match. When Forsythe's lat Repulse still couldn't clear a path, he stuck out his hand, shook Mike's, and then pounded the Samite Archer that had done him in.

Turian seemed momentarily exhausted after the match lamenting "Why can't I just play red/green?" He then reconsidered and explained "that's why the format is fun actually . . . all the colors are beatdown." Turian's first deck was a black/red deck with multiple Phyrexian Battleflies, among other weenie beatdown creatures. He lost to Pete Leiher because "he was smart." "Most people draft lots of Faerie Squadrons and Duskwalkers in their black/blue deck and the it doesn't matter that they Recoil or Repulse your stuff because you just recast it and keep attacking. But Pete's deck was all Vodalian Zombies and Urborg Drakes so he won." 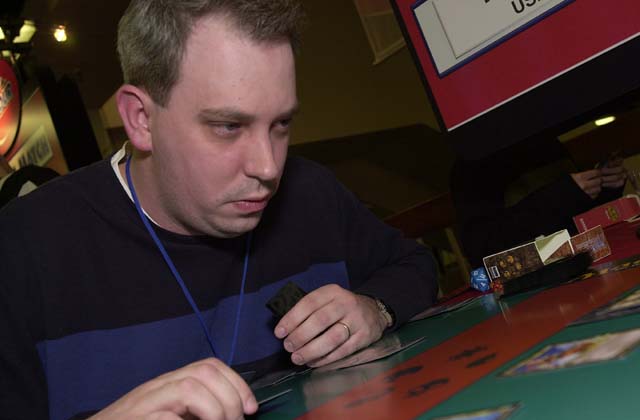 You heard it here first (and from Mike Turian): the key to this format is 1 & 2 drops so you can both take best advantage of your own bounce and minimize your vulnerability to your opponent's bounce.