Round 4 Feature Match: No Lands, Man

a strange tournament when Gerry Thompson and John Pelcak are sitting in the 3-0 pod after the Constructed portion of the event, but that's U.S. Nationals for you. These two former Minnesotans are considered Limited specialists, but they started the Standard portion of the tournament well and are looking to continue that trend in Ravnica Block Draft. 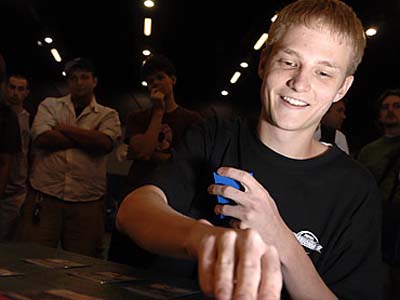 Thompson has been relatively quiet lately, but Pelcak is having an excellent season, posting a Top 4 at Grand Prix-Madison earlier in the year along with a Top 4 finish at Pro Tour-Charleston in June. Pelcak's decklist is clearly the better of the two, featuring an extremely deep, almost two-color Simic deck. Thompson was a bit hard done by the packs on his side of the table, and is running the classic four-color-no-green special.

Thompson was less than pleased by his double mulligan on the play, and found himself immediately facing down Shambling Shell, Aquastrand Spider, and Bramble Elemental. Thompson's Swamp and Mountain were not enough to intimidate Pelcak into conceding, and it was on to Game 2, with Thompson thus far failing to cast a spell.

"Is this real?" Gerry asked as he drew his opening seven. "Geee-zus… this is just… wow. Any lands?" Thompson was again mulliganning to six faster than a northerner breaks a sweat in the Atlanta summer. A quick look at his six had Gerry shaking his fist at the sky, pitching 'em back again and fishing for a better five. Pelcak admitted he was going to mulligan at this point as well, which gave Thompson the faintest glimmer of hope.

"Wouldn't it be awesome for him to just go to three, gimme a chance? I actually need him to go to three - four would just destroy me."

Pelcak kept his six and promptly blew Gerry out again, casting Aquastrand Spider, Gruul Guildmage, and Greater Mossdog in succession. Thompson managed to cast a couple of spells this game including Freewind Equenaut, Demon's Jester, and Stinkweed Imp, but it was never close. Magic is apparently hard to win when you start every game with two fewer cards than your opponent.