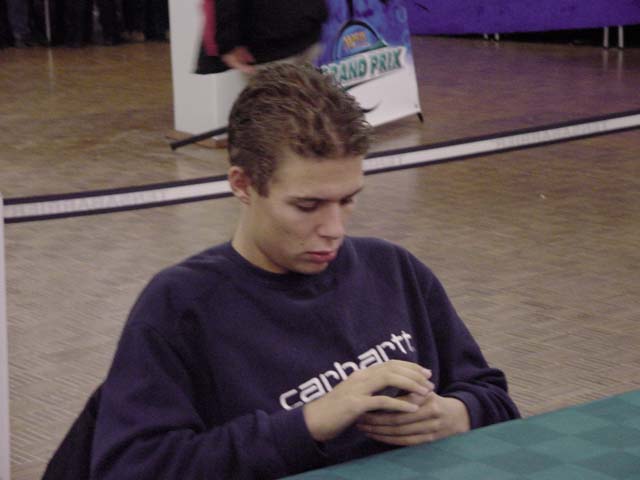 This was the first round for both of these players - they had received three byes due to their Pro Tour Point totals. Steve was the winner of Pro Tour Los Angeles back in 1998 but has been pretty quiet recently, whereas Noah is having a good year, with a win in last years' European Championships and a Grand Prix win at Helsinki back in October.

Noah had a Blue/Black/Red deck, one of the most popular color combinations among the top players, whereas Steve was playing a very unusual set of colors, Blue/Red/White.

Noah was forced to take a mulligan in game one, but the customary look at the top of his deck revealed that he would have drawn five straight land had he kept it, which would have allowed him to cast a turn six Crosis the Purger! His second draw was better, although still not great. Noah did not have any cheap creatures, which allowed Steve to get in some early damage with an Obsidian Acolyte, a Riptide Crab and an Ardent Soldier. Noah was frustrated to be getting damaged by these creatures, as they are the type of card that you include in your deck when you run out of good cards. The 2/3 Soldier continued to cause him problems even after he managed to cast a couple of creatures, and he was forced to double-block with a Firescreamer and a Firebrand Ranger in order to kill it. Steve wasn't done though, and followed his attack up with a Tek, which was a 2/4 flying first-striker due to the lands he had in play, and then a Vodalian Serpent. Noah drew a creature on the next turn, but the Kavu Aggressor that he got was of no help in stopping the loss of life. He only had two turns to draw an answer to the Serpent, but only drew a land and a Tidal Visionary.

In game two it was Steve's turn to get a poor draw. During sideboarding he had joked with Noah that he would keep any seven cards, but he was probably regretting that decision by the end of the duel. He kept a hand with only Plains, Mountains and blue cards in it, figuring that he would have a while to draw a land. Noah never gave him the opportunity, though, as he had a great draw. Going first he played a turn one Tidal Visionary, then a Sky Weaver, and finally a Vicious Kavu. The Kavu is the sort of card you want to have when your opponent is mana-tight, as it attacks for four a turn. Steve was forced to concede on turn five.

In game three both players had horrible draws, with which they struggled to get to four mana. Initially it looked like Steve was in more trouble as he was forced to discard on turns four and five. Both players had lots of Red cards in their hand, but no Mountains to go with them. Noah had a Vodalian Zombie, a Sky Weaver, and a Tidal Visionary in play, which allowed him to deal four damage a turn, while Steve could do only one a turn with the Ardent Soldier he had cast. These attacks brought Steve down to eight while he was still looking for a fourth land. Still, Steve was the first to draw the relevant land, and when he got an Island he was able to cast Wings of Hope on his Soldier to stem the attacks, and then summoned the ubiquitous Tek. Noah eventually drew a Mountain, but his Lightning Dart didn't deal quite enough damage to kill the 2/5 Ardent Soldier. Since the Soldier could attack without tapping, this meant that Steve could go on the offensive, without Noah being able to get through any of his own damage. Steve attacked with these creatures four turns in a row, before Noah managed to play a blocker, however, in two consecutive turns, Steve cast Repulse on Noah's biggest defender, allowing him to attack with Tek for the win.

These games didn't make the best of matches, as they basically came down to one or both players not having enough land to cast their spells. Noah will be quite disappointed to lose, especially as he never had chance to show off the good cards in his deck such as Crosis the Purger, whereas Steve must be very relieved to beat Noah, despite not having a very good deck, and getting relatively poor draws. However, there is still a long way to go on Day One for both of these players.