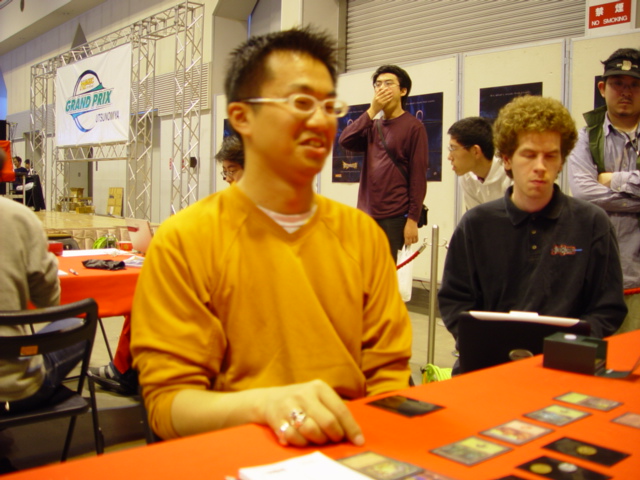 Sideboard Japan mainstay Kouichirou Maki hopes to be taking the whole weekend off, but with his current Sealed Deck, he fears he'll be back in the reporter's chair come Sunday. He won't have it easy this round, facing Osamu Fujita, ex of Anchans. Fujita always has the same things about him: Jean jacket, a grimace, and a winning record.

Maki was forced to send back a one-lander, and Fujita's face twisted into a sinister smile. He had a pretty good start, considering. He led with Sparksmith and a morphed creature, shutting down Fujita's Goblin Taskmaster. He suicided his Taskmaster to make the Sparksmith a little more reasonable, and started making mystery men of his own.

The two traded what turned out to be Spined Basher and Battering Craghorn. Shock dispatched the Sparksmith, but Maki had a replacement. Fujita's Charging Skateback hit, but Maki had plenty of morphed creatures by this time, and Fujita was stymied by the Sparksmith. His second swamp enabled Anurid Murkdiver. Maki unmorphed his Spitting Gourna at end of turn, then made another morph guy. Fujita's 4/3's charged in. The Gourna fell to the Murkdiver, and Commando Raid took out the Sparksmith.

Unfortunately for Fujita, he found out that the new morph creature was, in fact, Venomspout Brackus, and it ate his Skateback when it attacked the following turn. That was the turning point, as Maki's 5/5 was far better than a pair of Frightshroud Couriers. 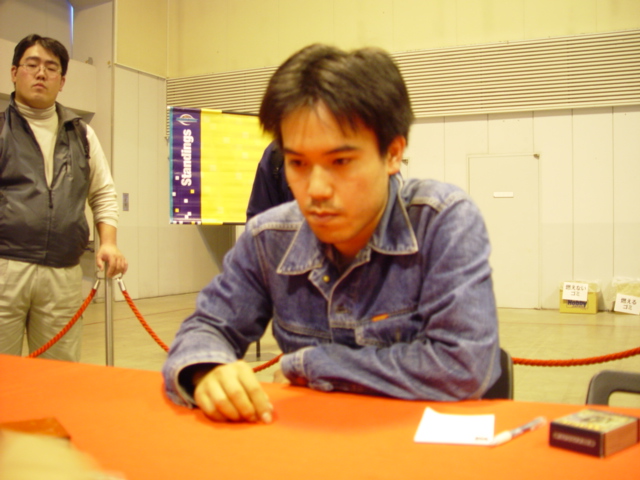 Maki showed no mercy for Fujita's mulligan in the second game, opening with back-to-back Elvish Warriors. Fujita had Nantuko Husk and Frightshroud Courier, but decided to eat damage for a while. Sparksmith made things that much worse. Fujita decided to hold his mana open and pass it back.

Maki swung with his Warriors. He ended up trading one for the Courier, via the Husk. Spitting Gourna joined his team. Fujita answered with Gluttonous Zombie. Maki swung for two, then dropped Nosy Goblin and offed the Husk. Fujita was in a bad way. Another Gluttonous Zombie helped a bit, tag-teaming the Gourna on the next attack, but Maki continued to Threaten with Symbiotic Beast.

Fujita flailed, hoping Anurid Murkdiver would be enough. Maki's one mountain and five forests still let him unmorph Skirk Commando, giving the Sparksmith enough firepower to take care of the Murkdiver. He bashed. Fujita tried a last stand with Nosy Goblin and Frightshroud Courier, but without a way to stop the Sparksmith, he had no outs.