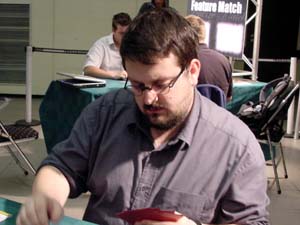 first match of the day for these experienced players. David is former European champion and usually posts good records on the GP circuit. Pierre on the other hand is no stranger to success either. He was runner up last year at Euro's and he won a GP. Let's see who woke up the best after their 6 hours waiting time.

Pierre played first and started with a turn one Goblin Prospector. David has a turn one Arcbound Worker. This gives us a match between the 2 decks that are likely to dominate the tournament this weekend: Goblins versus Affinity.

Sparksmith comes down for Pierre on turn 2, which is usually a big problem for the affinity deck. After a cycled Gempalm Incinerator David is left with just 2 lands and a Welding Jar facing Pierre's army of Goblins. Even the most important card in David's deck, Skullclamp, can't help him here and Pierre takes game 1 within a couple of minutes.

David keeps his opener but Pierre is more optimistic: "it's perfect" is his answer when David asks him if he keeps his hand.

Sparksmith hits play on turn 2 again and comes in for a point after a Frogmite got bolted. Like game 1 still not a lot of action from David's side, the only thing he can manage is a 4-mana Myr enforcer. On the meanwhile Pierre's perfect hand turns out to be pretty perfect indeed: Goblin Warchief and Goblin Sharpshooter, which teames up with the Sparksmith and takes down the Enforcer. David won't give up without a fight though and plays 2 Pyroclasm's, the first one to take out the team of Smith, Warchief and Shooter. The second one finishes off the fresh Siege-Gang Commander, friends and another Sharpshooter. 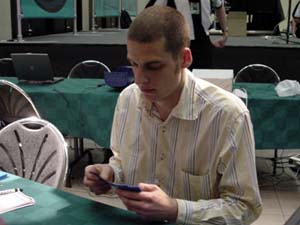 Life totals are 15-5 at the moment in Pierre's favor and things still look grim for David as Pierre plays yet another Siege-gang commander. David is forced to despatch the 5-mana Goblin with a Shrapnel Blast but the 3 Goblins and a Goblin Sledder are able to deal enough damage to make David scoop up his cards.