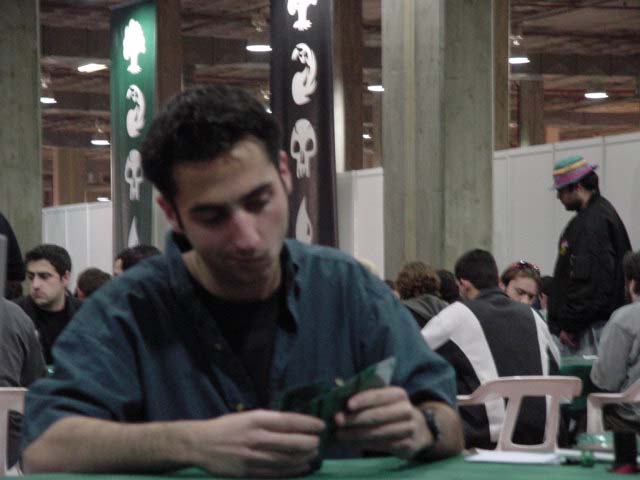 The round kicked off with some friendly banter as both players have known each other for quite a while. Raphael classified his deck as "simply bad" while Bram called his "average", yet both felt they could make second day. The probable 5-2 cut into the second day seems easier when you have three byes. A good luck handshake, poker faces and the round was on the way!

Bram wins the dice war and decided to play second, therefore nabbing a extra card draw. Raphael kicked off with a Might Weaver while Bram played a Lord of the Undead. Raphael seemed to be in trouble when he missed his fourth land drop. He did have a surprise and when Bram swung, he played a Fleetfoot Panther! That would have killed the Lord but Bram had a clever trick up his sleeve as well.

He used a Magma Burst to kill Raphael's only creature in play, the Weaver, forcing the Frenchman to bounce the Panther back to his hand. This proved more devastating than expected because Raphael was truly stuck at three lands and could not find a creature!

Bram's army got big with a Phyrexian Reaper and a Phyrexian Bloodstock which drew laughter from both players. Levy's situation was indeed dire, and somewhat ironically funny, but he managed to find a fourth land to cast his Benalish Herald as an emergency blocker.

It was too little, too late. Bram dropped a Stormscape Battlemage to get rid of the blocker and ride in for the win.

A early ironic smile from the Frenchman seemed to point to mana screw again but he quickly answered Bram's third turn Hooded Kavu with a fourth turn Aurora Griffin. Bram added a Caldera Kavu to the mix while trading blows but Raphael put it back on top of the library with a Hunting Drake. 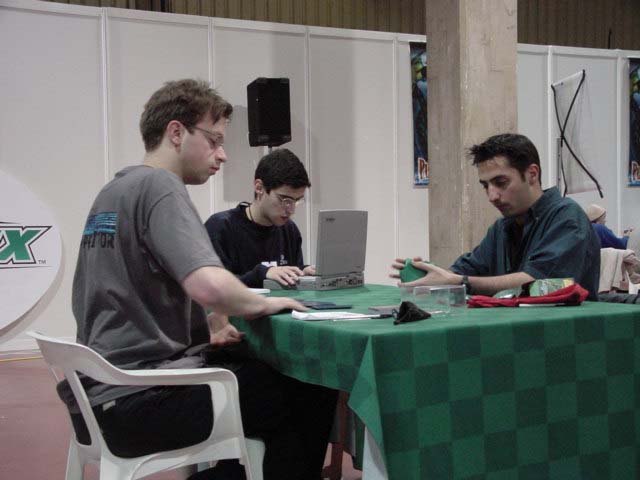 Surprisingly, or maybe not, the Caldera Kavu came into play again but Raphael had finally reached six mana and dropped a big bomb: Vodalian Serpent with kicker! Bram had no islands in play at the moment but needed to be careful or he could have been facing a huge incoming monster. The flyers and the Hooded Kavu kept trading blows while Raphael cast a Allied Strategies for three to further power up his hand.

At this point the game slowed down as both players needed to carefully consider the situation. They both had their full hands and while Bram's position seemed to be a color-screw (no blue mana source) there were a lot of possible cards, and situations, to take into account.

Bram was the first to take a long pause to build a battle plan and he seemed to have one when he Magma Bursted (no kicker) the Hunting Drake. The problem was that during Raphael's next turn the Griffin gained a brand new Armadillo Cloak and the damage races swung deeply to the Frenchman's side.

A couple of swings later Bram found himself against the ropes and still without an answer. A cloaked Griffin forced the Dutch to scoop. After the match Raphael noticed that one of the tournament clocks has stopped and pointed out that although the action had been fast and furious they could not have played two game in four seconds :)

The good humor carried on well into the third game as Raphael murmured "no, no" as Bram tapped to cast, again, the scary Lord of the Undead. Raphael dropped a Glimmering Angel but didn't have blue mana to protect it from a Mourning. He did, however, find an Aurora Griffin to start swinging and a turn later droppde a Kavu Climber to balance the Phyrexian Reaper that Bram had just summoned.

When Bram swung with the Reaper, Raphael begged him to attack with the Lord as well (straight into the hungry mouth of his Kavu Climber). Both players laughed and still kept a good mood as the decisive game kicked into gear. Raphael needed to find a blue source for his hand full of blue cards. While he waited, Bram added a Caldera Kavu to his army.

Raphael finally finds blue mana in a Chromatic Sphere. In fact the Sphere is so helpful that it even gives him a Island to keep the blue mana flowing in. Again the Frenchman resorts to a Armadillo Cloak to get back into the race while the Climber and the Griffin slow down Bram's army. 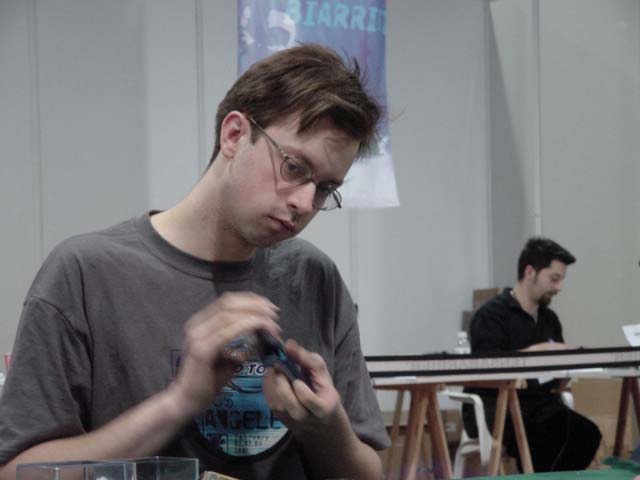 Bram would have none of that and uses a Reckless Spite to remove the two blockers (Climber and Griffin), swinging for nine putting Raphael in big, big trouble... facing a 4/4 Zombie, a pumping Kavu and a Lord with only the overworked Angel as a potential blocker.

The Angel gets bigger with a Strength of Unity and swings for five to give Raphael some much needed breathing room. Both players take their time and carefully think every possible play as the tension grows in this hard-fought match. Raphael plays an unkicked Faerie Squadron and turns things over to Bram.

The Dutch finally drops an island but seems to have no immediate powerful spells as he tentatively considers his attack phase and swings with everything, and then takes it back! The crowd grows around the table and both players are visibly nervous. He finally makes up his mind and "re-swings" with everything. The small Squadron takes one for the team and dives straight into the incoming Reaper.

Bram then Recoils the Angel to drop a huge, huge hammer in Raphael's crystal hopes. Raphael slumps visibly and can only use a Allied Strategies for three to a desperate blocker in Might Weaver. Since he can't find a way to win the game he jokingly blocks the Lord flipping it into the graveyard as he died... The Lord did indeed help Bram during the whole round but the Reckless Spite was the spell that really turned the game.

A very friendly round between to great players with a long history of success and a very sporting attitude towards the game. They talked about the match after finishing the round, considering (with Olivier Ruel) different options that Raphael might have taken in the third game. Despite the high stakes and tensions involved in the game they still take it with a very classy attitude.