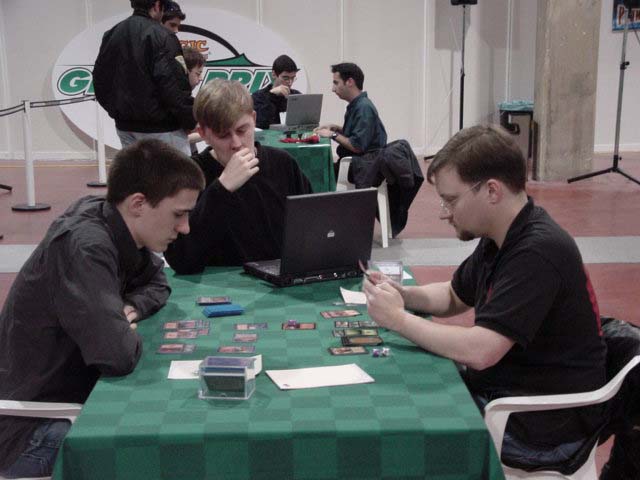 Rob is one of only five North American players here this weekend, along with his Your Move Games team-mates - Chad Ellis and Darwin Kastle - and Ryan Fuller who is originally from Canada, but is now resident in the Netherlands. This makes him a country-man of Rob's opponent, Jelger Wiegersma. Rob is way up there in the Pro Player of the Year race right now, while Jelger is best known for his tenth place finish at Pro Tour Chicago last year.

Jelger won the die-roll and opted to play first. He seemed pretty happy about his opening draw, but Rob's hand was mostly land and he was forced to mulligan down to six cards. They both had slow draws, doing nothing but laying lands for the first three turns, and Jelger opted to Zap Rob in order to find a threat. He did so with a Firescreamer on his turn four. Dougherty's only creature that he could cast was a Sparkcaster, which immediately returned itself to Rob's hand, although in the process it did deal a fairly innocuous looking point of damage to Jelger. Wiegersma played a bomb on his next turn with Tahngarth, Talruum Hero, but Rob had turned out to be holding back with a Breath of Darigaaz, which cleared the board.

Two Battlemages squared off on the next turn - Jelger destroying an Elfhame Palace with Nightscape Battlemage, and Dougherty destroying that with a Thornscape Battlemage. The Wizard was soon joined by a Phyrexian Reaper, and although Jelger cast Terminate on the Reaper, the Sparkcaster made a reappearance, threatening to end the game in short order.

Removal followed removal as the Sparkcaster was killed by a top-decked Shivan Emissary, which was in turn destroyed by the recast Thornscape Battlemage.

Jelger managed to get some defense back down with a Razing Snidd and a Shivan Zombie, whereas Rob still had just the Battlemage in play. Rob attempted to get something going with a Kavu Aggressor, but despite being on ten, Jelger decided to attack with his creatures, trading the Shivan Zombie and the Battlemage. This attack brought Rob down to seven, and Jelger played a Morgue Toad as well.

The Kavu Aggressor attacked - bringing the Dutchman to four life, and Rob played a Slingshot Goblin. Even now it wasn't clear who was going to win, as Rob was himself reduced to four when the Razing Snidd came across. In fact it was so unclear, that Rob opted to play Canopy Surge with the kicker - reducing both players to zero life and thus tying the game.

Despite going second, Rob managed to accelerate his mana base considerably with two Quirion Explorers in the first three turns. Jelger was quite happy simply to cast an Urborg Drake and attack with it, then play a Rogue Kavu.

Rob's two extra mana meant that on turn four he was able to play a Serpentine Kavu and give it Haste. Blows were exchanged, but the Kavu seemed to be winning the race as Rob held back his Quirion Explorers to block the Rogue Kavu and an Urborg Phantom Wiegersma had summoned, and reduced Jelger to twelve with the 4/4 creature. The Serpentine Kavu was destroyed next turn however, by a Shivan Emissary, leaving the American with only a Crosis's Attendant for offence. With five lands in play it looked like the Quirion Explorers were a little redundant. This turned out not be the case as they facilitated him in summoning a Sparkcaster, and suddenly Dougherty's offence looked pretty threatening. 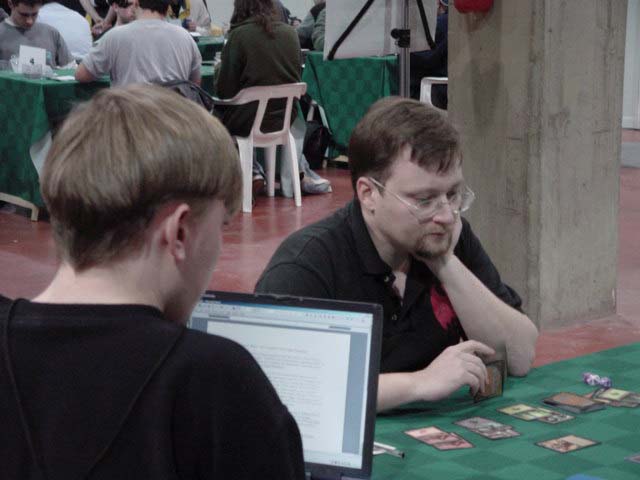 In a match-up like this though, such an advantage rarely lasts for long, as Jelger had the Terminate for the Sparkcaster. A Shivan Emissary and a Scorching Lava were sufficient to kill the Attendant however.

With Jelger on eight, and Rob on nine, Rob attempted to remove Jelger's only blocker - a Shivan Zombie - with a Scorching Lava. Jelger took this opportunity to cast Rushing River, returning the Zombie and Rob's Kavu Aggressor to their respective hands.

Perhaps this turned out to be a bad play - as it meant that the Aggressor could be recast as a 4/3 - too large for any of Jelger's creatures to block and kill by themselves. The Urborg Drake was now attacking alone for Jelger - whereas Rob also had a Nightscape Battlemage and a Slingshot Goblin. The Wizard had destroyed Jelger's only Swamp, and without it he found himself unable to recover - dying to the three attackers.

The starts this time were much faster - Rob's turn two Nightscape Familiar was killed by a Scorching Lava, and their turn three creatures - an Urborg Phantom and a Slingshot Goblin traded.

Jelger stuck on three land for a while - but this didn't stop him from playing a Caldera Kavu and a Hooded Kavu. His Hooded Kavu even managed to trade with Rob's Phyrexian Reaper (with a little help from a Zap).

The board was cleared on turn five as Rob played Soul Burn on the Caldera Kavu, and followed it up right away with a Hasty Serpentine Kavu. The Kavu was killed by a great sideboard card for this match-up - Slay, which allowed Jelger to kill the Kavu and draw a card. He then started to attack with a Volcanic Imp, and after that was destroyed by Canopy Surge, with a Rogue Kavu. 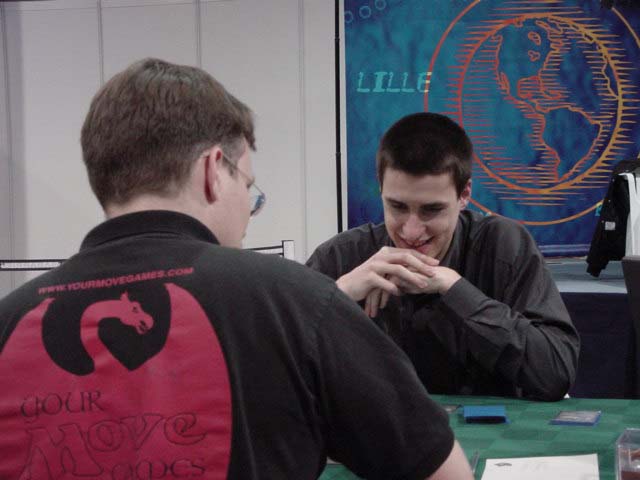 Rob was far from finished though - swinging the momentum once more with a Thornscape Battlemage. However here it got nasty for Rob as the Battlemage met with an Agonizing Demise and he was forced to cast Aggressive Urge randomly on Jelger's Shivan Zombie to try and draw an answer. For a brief moment it looked like the card he drew - Crosis' Attendant, might be sufficient to the task, but Jelger had Tahngarth again, and unlike in the first game, Rob was unable to deal with it immediately.

Jelger's next attack dropped Rob to two, despite him chump-blocking the Tahngarth, and he was forced to concede on the following turn.