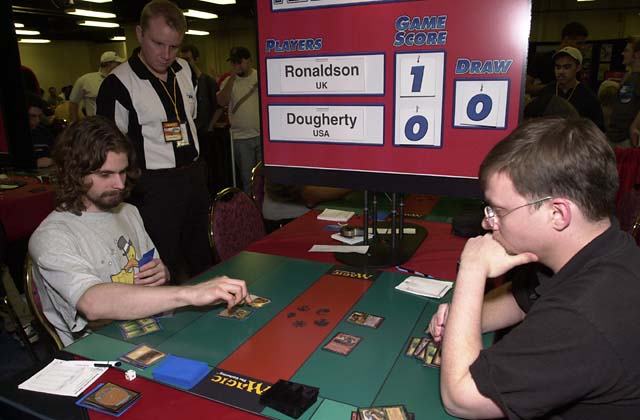 Both players were 3-0 going into this round, Rob had drafted a Red-Black-Green deck, while Ben had drafted a Green-Blue-White deck. Both players have had star performances in the recent events they've attended. Ben (native to England) had a top 8 finish in Grand Prix Florence, and Rob (from team Your Move Games in Boston, USA) had a top 4 finish in Pro Tour Chicago. Both players were commenting on the how everyone at their draft table seemed to be fighting over Green and Red.

Ben wins the die roll and chose to play first, he opened with one of the ever-popular sack lands, Irrigation Ditch. Ben played Llanowar Knight, Nomadic Elf, and Razorfoot Griffin before Rob did anything other than play a land. In answer to the Griffin, Rob cast Exotic Curse, targeting the Griffin. Ben played another land, sacked the Ditch, and cast Benalish Lancer with kicker. Rob laid a Mountain and said go. In response to Ben's casting of Crimson Acolyte, Rob Backlashed the Benalish Lancer, hoping to stay alive a couple more turns. When Rob was finally to 6 life, he Aggressive Urged one of Ben's creatures at the end of his turn so that he might be able to draw an answer, which didn't come. 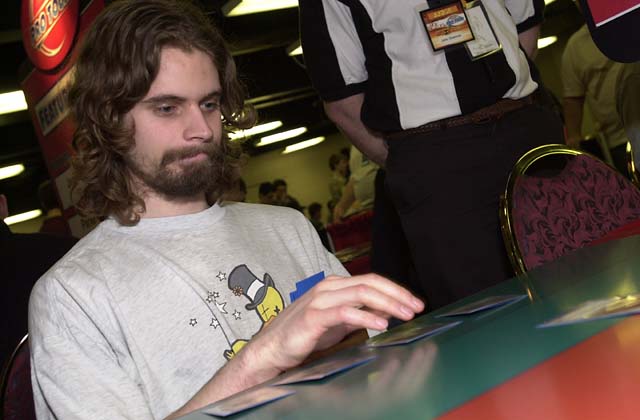 Game two, Rob chose to draw. The first four turns of this match consisted of both players dropping just forests, and no permanents. Rob finally broke the trend by playing a third turn mountain and then a Kavu Aggressor. Ben hoped to chump with his third turn Quirion Sentinel (which he burned for one to get out as he couldn't use the mana provided by his coming into play effect), but Rob Zapped the Sentinel before he attacked. Ben then cast a Razorfoot Griffin, which Rob Lightning Darted before he attacked again. For every defense Ben put out, Rob had an answer for it, which enabled him to do enough damage before he Breath of Darigaaz'd Ben out of the game.

Game three Ben decided to play, and he opened play with a turn two Llanowar Knight. Rob answered with a Quirion Elves, and declared Black as the color of mana they would produce. Both creatures swung for one hit before Ben got out a Prison Barricade, with kicker, and Rob cast a Kavu Climber. To break the limbo, Ben cast a Razorfoot Griffin (which Ben has two of in his deck), but Rob had an answer yet again with an Agonizing Demise, with kicker. Ben gave a small sigh, and then cast Rampant Elephant. 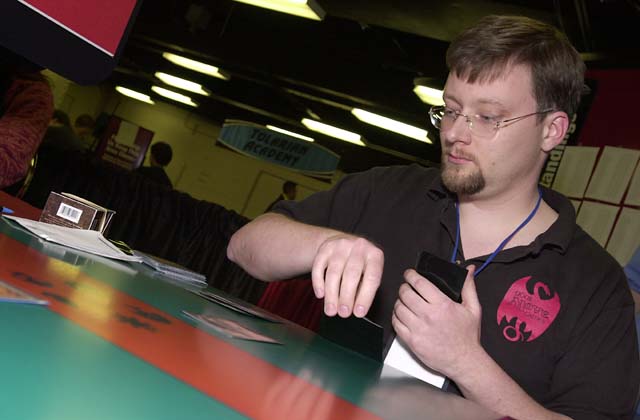 Rob exploded on his next turn when he cast Explosive growth on his Kavu Climber, Breath of Darigaaz with kicker to clear the board (save his Climber), then he attacked with the 5/5 Climber, and cast Shivan Zombie before he ended his turn. Ben tried to come back when he cast Llanowar Knight and Thornscape Apprentice, but he only used them to double block the Climber the next turn. Rob ended up running over Ben's defense for the Match Win.