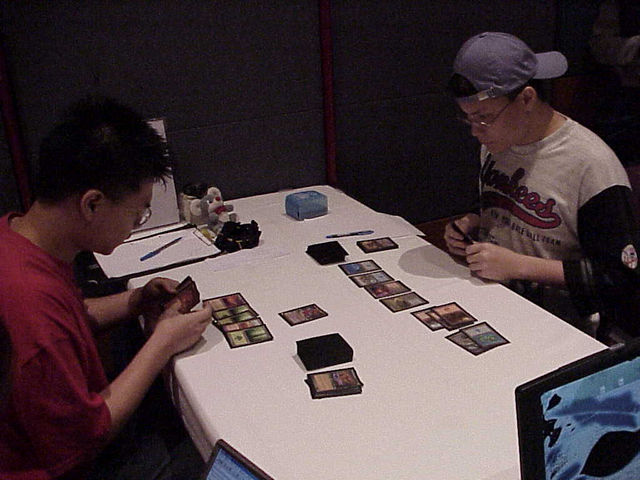 Luck would have it that this would be a battle between former and current National Champions. The charismatic Ryan Soh is the current Malaysian National Champion, and Robin Pong was Singapore's representative way back in 1998. Their smiles did little to conceal the fact that they were out for blood.

Soh had to mulligan his first hand, and almost made the error of drawing seven again. Luckily, the table judge had his watchful eye on things, and prevented disaster. Soh was also the first to bring pressure to the table with a turn-two Thornscape Familiar. It was short lived, falling to an end-of-turn Urza's Rage after only one attack.

Pong had all three of his colors at his disposal, and Soh was hesitant to make a move. The two traded land drops for two turns. Pong dropped a Fact or Fiction at the end of Soh's turn, and Soh had them in piles the moment they came out. Pong chose Undermine and two lands over Fact or Fiction and Opt.

Soh made a Mongoose, running his Kavu Titan into an Exclude. Pong continued to play out land, happy with his life cushion. The Mongoose hit. Pong Undermined a Thornscape Battlemage. Prophetic Bolt added to his arsenal. After he took another hit, he decided he'd had enough, and Voided for two. 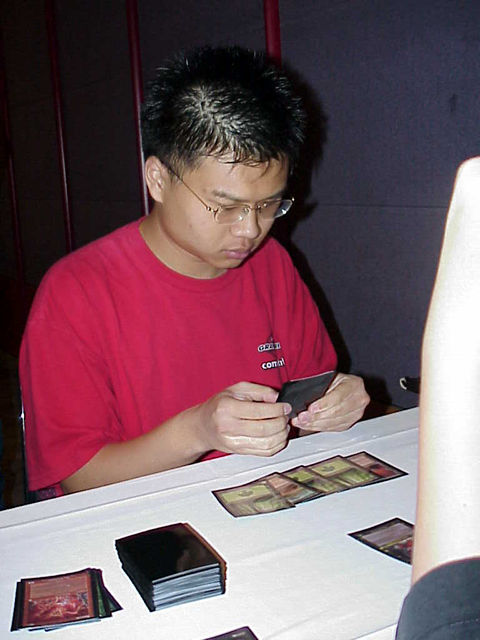 What he saw in Soh's hand was not heartening. Two Skizziks, Raging Kavu, Ghitu Fire and Flametongue Kavu. The Raging Kavu came down at end of turn. Pong saved his Undermine for the Skizzik he knew was coming.

Pong took the damage, untapped, and tapped five. Soh thought it was a second Void. When he saw that it was, in fact, Yawgmoth's Agenda, he was taken aback. "That's, um, very bad." was all he had to say.

Pong Excluded Skizzik the Second from the graveyard, then untapped and brought back his Void for an encore. This time it was for three, and caught Urza's Rage in addition to the Kavu on board. Interestingly, Pong hadn't missed a land drop. That let him completely ignore Soh's next play of Thornscape Familiar and Flametongue Kavu, since all he had to do was untap, lay a land, and Rage with Kicker for the win.

Soh went first in game two, putting him at a huge advantage. He capitalized with two Thornscape Familiars. Though Soh stalled at two lands, Pong opened with two Salt Marshes, and failed to show Fire when the twins knocked on his door next turn. 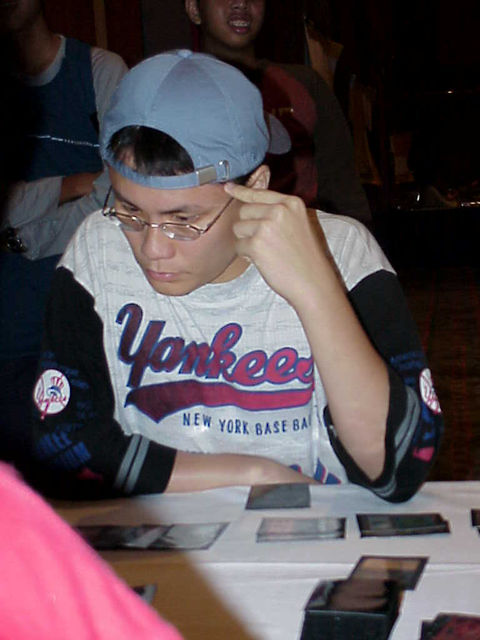 Pong tried to stem the tide. When Soh added a Blurred Mongoose to his team, Pong Repulsed a Familiar just to keep up. He Undermined it when it came down next turn. Soh had a third familiar, but Pong had a second Undermine. All this time Soh's creatures had been swinging, and Pong was at six.

Urza's Rage put him to three. Soh untapped and played Thornscape Battlemage with kicker. Pong had all the answers, but not nearly enough mana. He packed up his cards for game three.

A turn-two Blurred Mongoose was bad times for Pong. Things got worse when Soh followed it up with Overabundance. Pong had to let it through. He aimed a Prophetic Bolt at Soh's head and took Breath of Darigaaz to mop up the Mongoose. His life total was plummeting.

Soh thought hard before dropping unkicked Kavu Titan and Skizzik. Pong was ready with Ice. His Fact or Fiction left him with just nine life. He chose Nightscape Familiar, Opt and Breath of Darigaaz over two Undermines.

Pong untapped and went to six to Void away the Kavu Titan. He saw two Thornscape Battlemages and an Urza's Rage in Soh's hand. He did his best to throw up defenses, but things were too far gone. He scooped.