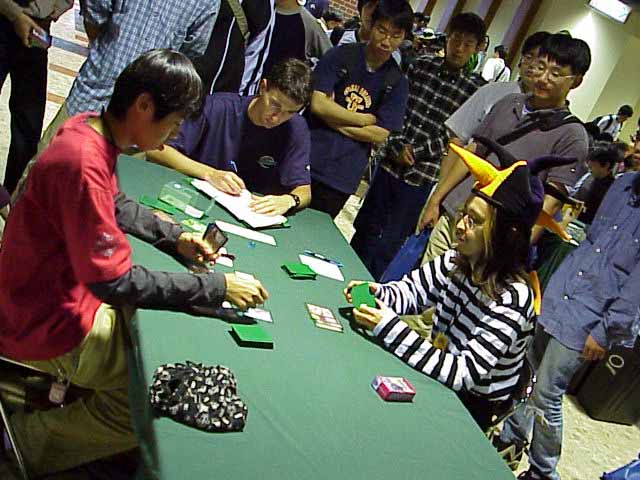 Satoshi Nakamura, one of Japan's most famous players, is paired against Katsuhiro Mori, an invitee to the 2000 Magic Invitational to be held in Sydney, Australia in November.

If you blinked you may have missed the result of this furiously fast game. Satoshi and Katsuhiro open with mulligans and after drawing their second hands are ready to start. Satoshi opens with a Sword Dancer and Charm Peddler. Unfortunately that was all he was capable of playing for the game, as he stalled on only two mana.

Katsuhiro started dropping some creatures including a Horned Troll, Steadfast Guard and a Trenching Steed. Satoshi was crippled by lack of mana, but managed to stay alive by blocking with the Sword Dancer and then using the Charm Peddler to prevent all the damage to it. However it wasn't enough to stay alive for long, and Satoshi scooped a few turns later.

Game Two This game proved more interesting then the first, and was also played at a lightning fast pace. Katsuhiro does some early damage with a Crossbow Infantry and a Troubled Healer. This is eventually stopped when Satoshi lays Gerrard's Irregulars and Shock Troops. A Gush is then played by Katsuhiro, which provides him with a Waterfront Bouncer. Satoshi slows the life loss with a Noble Purpose but when a Pious Warrior and Lawbringer join Katsuhiro's team it doesn't look good for the past APAC Champion. Defender en-Vec keeps Satoshi alive for a few more turns but the Waterfront Bouncer is just too strong, and Katsuhiro takes the game. 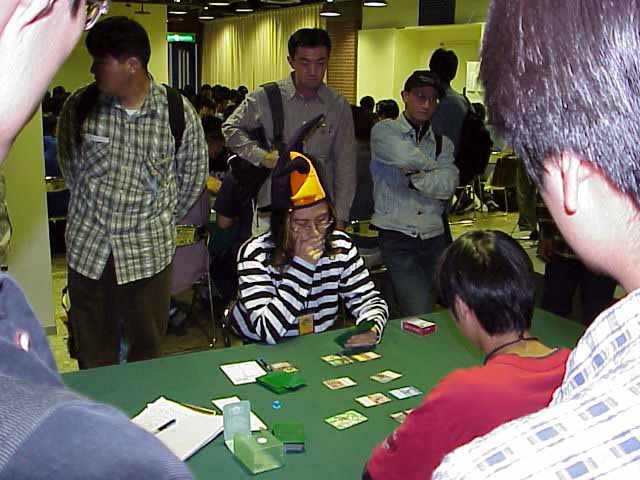