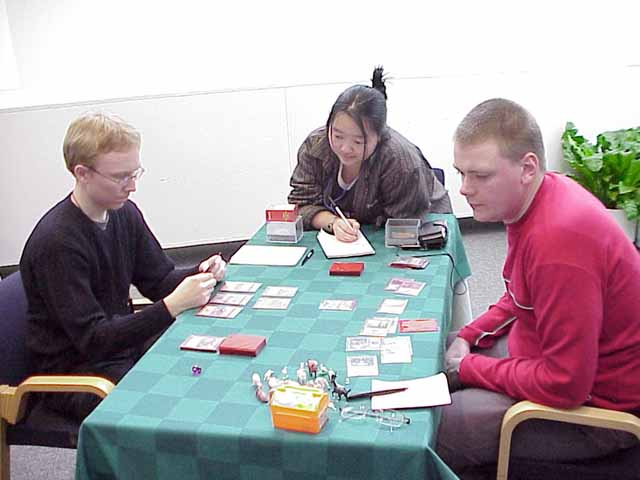 In the fourth round of Grand Prix Helsinki, Sigurd Eskeland from Norway and Erno Ekebom from Finland faced each other at the feature match table. They both had three byes, and so the match was the first test for their decks. Sigurd was with a five-coloured deck with a lot of strong spells but a tad light on removal, while Erno had a typical black, red and blue deck with plenty of creature removal in addition to strong creatures.

Erno won the die roll and chose to play, and he spent the first turns simply removing Sigurd's creatures from the table. First, he Tribal Flamed a Llanowar Knight, then he Zapped a Samite Archer, and finally he Annihilated a Glimmering Angel - still holding an Agonizing Demise in his hand. Then, he cast his first creature of the game, a Sparring Golem.

Sigurd had drawn into all the different lands, and he cast a turn five Probe with kicker, taking two lands from Erno's hand. But Erno had two more cards in his hand, and during his next turn he cast a Duskwalker with Kicker and then followed up with an Ancient Kavu. Sigurd easily dealt with the Duskwalker. An Exotic Curse took care of it, and Sigurd also had a Quirion Trailblazer that got him another Island. He then cast a Pincer Spider with kicker to get a blocker.

In order to get to attack, Erno cast the Agonizing Demise with kicker, killing the Spider. He then went offensive and started attacking. Sigurd wanted more land, and he Harrowed during Erno's end of turn step. Then, in an attempt to stabilise, he dropped Treva, the Renewer whom he had kept in his hand for quite a while.

Erno didn't have any islands in play, but he sacrificed a Sulfur Vent to show his first blue card, a Recoil. Treva was returned to Sigurd's hand, and Erno sent his creatures over to take Sigurd down to six life. He also summoned a Kavu Scout, putting even more pressure on the Norwegian who was down at two life after the next attack. And at two, even a Ravenous Rats was a big threat even though Sigurd got help from a Faerie Squadron.

The Finn added a Tower Drake to his army, and Sigurd had to draw something in order to survive. He cast Probe with kicker and found a Tribal Flames that killed the Tower Drake. But unfortunately, Erno topdecked a Soul Burn and finished him off.

Eskeland chose to let Ekebom play first in the second game, but this time, the Finn didn't draw that much removal in the start. He cast a turn three Tower Drake and then a Phyrexian Slayer though, going beatdown while Sigurd played three forests in a row.

Sigurd hadn't drawn a lot of lands, but he had Harrow. Fetching an Island and a Plains, he was able to cast Quirion Trailblazer and get to a swamp as well. And the following turn, he cast Ordered Migration, got four bird tokens and stopped Erno's offense.

Erno didn't have a very good draw, he didn't cast anything the following turns. Sigurd was able to stabilise and even get the upper hand by casting Benalish Emissary with kicker, destroying Erno's one mountain. He also Probed with kicker, and Erno put a swamp and an Ancient Kavu in his graveyard.

Erno had an Exclude for a Kavu Climber, and he finally cast a creature, a Sparring Golem. Sigurd had bigger creatures, though. The Norwegian played a Serpentine Kavu, but it was Annihilated. Then he cast a Rooting Kavu that was allowed to live for a while.

Erno dropped a Slinking Serpent to add to his defense, but Sigurd didn't want that much defense and Recoiled the Phyrexian Slayer. The Norwegian then Zapped the Tower Drake, Plague Spored the Sparring Golem and sent his Rooting Kavu for some turns. Erno finally had to double-block it to kill it, but at that time Sigurd had drawn his Treva. And another Plague Spores for a Kavu Runner ended the game.

The third game was much shorter. Sigurd kept an opening hand with two lands and no forests, and he didn't draw more than four lands throughout the game. Erno, on the other hand, went beatdown. He cast a turn two Shivan Zombie, a turn three Ravenous Rats and a turn four Tower Drake, and when Sigurd cast a Shoreline Raider, he just cast a Recoil and continued attacking.

Sigurd got out a Samite Archer, but Erno had a Soul Burn for it. He was down to six life when he drew a forest, and trying to get back into the game, he cast a Fertile Ground so that he could Trival Flame the Duskwalker with kicker that had come into play on Erno's side of the table. He also got out a Llanowar Knight.

But Erno continued to attack, and an Ancient Kavu joined forces with the creatures already on the table. Sigurd Recoiled it to survive, and he also played an Ordered Migration that stabilised the board situation. But at one life, he was very vulnerable - and Erno played Agonizing Demise with kicker on one of the birds for the victory.