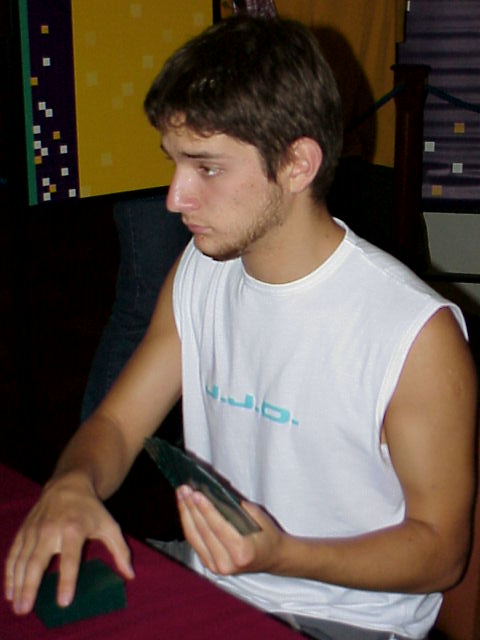 Steve O'Mahoney-Schwartz is one of the few Pro Tour regulars to come to Grand Prix Rio. He spent the first three rounds safe behind his byes, testing his deck in the front hall. Andreas Pablo Hojman Cruz wasn't nearly as lucky. He is undefeated going into this fourth round with only one bye. Both players have strong, controlling decks with many fliers.

Cruz came out strong in game one, opening with back-to-back tappers. They came through for damage while both players found all three of their land types. OMS' first non-land play of Caldera Kavu was Excluded. He untapped and played Bog Down. OMS discarded Pyre Zombie and Sea Snidd.

OMS finally got some board presence in the form of Tower Drake. Cruz played Mourning and sent his men again. The arguably defensive creatures knocked OMS to thirteen. OMS played an unkicked Bog Down of his own. Rather than lose both his cards, Cruz returned Mourning, losing that and a Dismantling Blow. Cruz drew and held back, passing the turn.

OMS brought back his zombie during his upkeep, summoning it after swinging with the Drake. Cruz elected not to tap it. On Cruz's next turn he played a kicked Stormscape Battlemage that killed the Drake. Unfortunately for him OMS had plenty of good spells back. He cast Cursed Flesh on the Stormscape Apprentice and an unkicked Waterspout Elemental. When Cruz's next turn yielded nothing, he removed the other tapper with a Soul Burn for 2.

Cruz stemmed the tide, casting Shackles on the Elemental and Hypnotic Cloud for 1, catching OMS' only card: Recoil. Without anything better to do, OMS attacked with the Zombie, and sacrificed it to kill the Battlemage. Cruz topdecked Angel of Mercy.

OMS regrew Zombie and played it. He took a hit from the Angel and struck back with his Zombie. His army grew in strength with Mire Kavu and Cavern Harpy. He gated the Elemental and Cruz rescued his Shackles. Catching OMS tapped out, he swung with the Angel again, knocking OMS to six. He played a Samite Archer and put Shackles on the Zombie. His hand was empty.

OMS sacrificed the Zombie to kill the Archer, destroying the Shackles before Cruz could return it. He attacked with his team and replayed the Elemental. Cruz couldn't draw an answer and succumbed a turn later.

Cruz had an early tapper again in Game Two, but nothing to follow it. OMS' draw was likewise slow, so the 1/2 had free reign over the table until it was joined by Angel of Mercy. OMS answered with Sea Snidd. Cruz kept the pressure up with a Phyrexian Battleflies and a Voice of All (Pro-red), sacrificing his Ancient Spring to get the second white mana.

OMS attacked with the Snidd, it being no defense against Cruz's air force. He played out one of his own: first Urborg Drake, then Cavern Harpy, bouncing the Snidd. Cruz tapped the Harpy with his Trapper to push through three more points of Angel damage.

OMS attacked with his Drake. He freed his crew from the Trapper by Soul Burning it. He played Cursed Flesh on the Angel to let his Harpy handle it. With the tide turning in OMS' favor, Cruz cast a kicked Hypnotic Cloud, leaving OMS with one card.

It was Allied Strategies.

OMS cast it, negating the Cloud's effect, and attacked with his Drake again. Cruz drew and played Opt, looking for answers. He found a Shackles, but still had no way past the Harpy. OMS upped the ante: he played out Caldera Kavu and Waterspout Elemental.

Cruz was desperate for a way out. He played Sinister Strength on his Angel and attacked with all his creatures. OMS blocked the Battleflies with his Elemental and the Voice with his Harpy, bouncing it after damage was on the stack. He took six, falling to six. He untapped and counterattacked with his creatures, knocking Cruz to eleven. Then he played Marsh Crocodile, stacking the gating and discard so he could lose the Crocodile. Cruz bounced his Shackles and discarded that.

Cruz secured his game position by casting Stormscape Battlemage with both kickers and holding back. OMS topdecked Bog Down and cast it. Cruz's only card was Cavern Harpy, which would have let him abuse the Battlemage. OMS' Urborg Drake ran into the Angel. 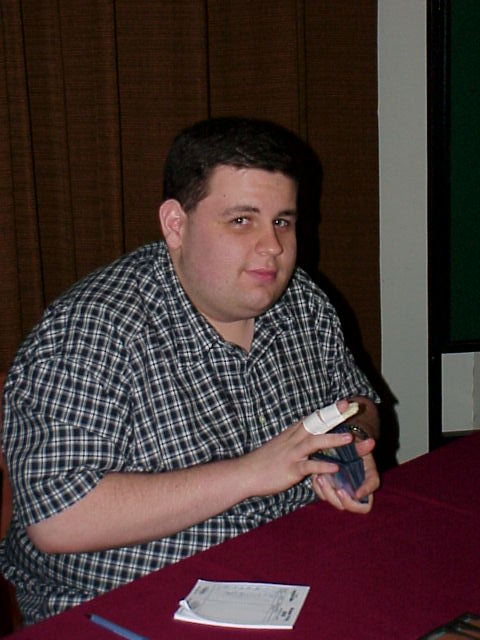 With five minutes remaining, both players quickened their pace. Cruz cast Galina's Knight. OMS had no answer. Cruz swung with everyone. OMS blocked the Battlemage with the Elemental and the Angel with the Harpy, bouncing it. He had just two life left. Cruz kicked up an Ardent Soldier.

Fate was with OMS. He drew Urza's Rage do eliminate the 5/3 Angel. He even had enough mana to replay his Harpy and Elemental. Desperate to finish his opponent, Cruz played Mourning on the Harpy and attacked. The Elemental killed the Knight. The Harpy blocked the Soldier and bounced, as did the Mourning.

He immediately realized that he had forgotten to lay an Island, and put it into play. OMS said that since he had already declared the end of his turn, he couldn't go back. A judge was called and sided with OMS. Cruz was surprised with the ruling because the game had been played very loosely to this point.

The upshot was that, without the Island, he wasn't able to save his Stormscape Apprentice from OMS' Pyre Zombie. The remaining extra turns ran out uneventfully.