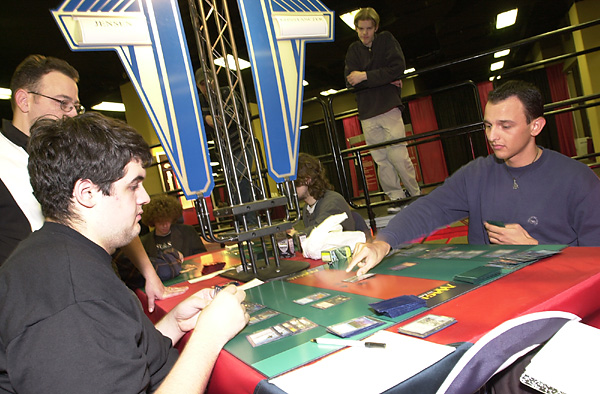 This year's New York Masters Series winner, the cute little Baby Huey was matched up with the boisterous Andre Konstanczer from Germany. Baby Huey was playing Blue/White control with Air Elemental for the kill. The quirky part about his deck is that he has Rebels in his sideboard.

The outgoing Konstanczer was playing Blue/Black control with Nether Spirits for the damage. He's been on the Pro Tour for quite some time and has attended around 20. Some of his accomplishments include a Top 8 in 1999 PT Rome and three Top 16 finishes at Pro Tours. 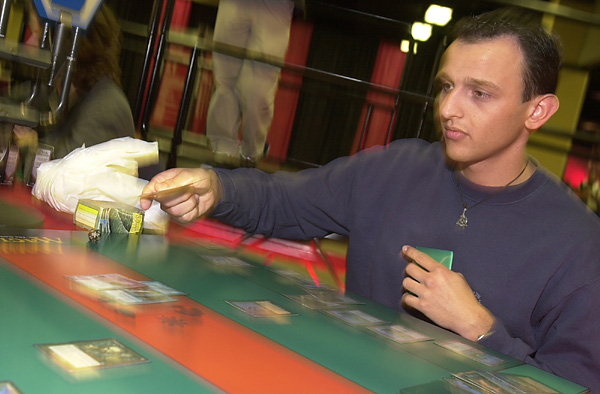 Baby Huey then shut down the Nether Spirit with only five life left, casting Air Elemental. The last play of the game started with Konstanczer casting Accumulated Knowledge which Huey Counterspelled. He then cast another Accumulated Knowledge and Undermined his own bringing Huey down to two life. When he killed the Air Elemental with Spite/Malice, the game was finished.

Konstanczer started out quick with a third turn Nether Spirit and a fourth turn Millstone and Rootwater Thief. Baby Huey then played a Ramosian Sergeant. Konstanczer threw a land at it with Rath's Edge's ability and continued attacking. Huey followed up with another Sergeant and an Air Elemental. Konstanczer cast Spite/Malice on the Air Elemental and attacked. 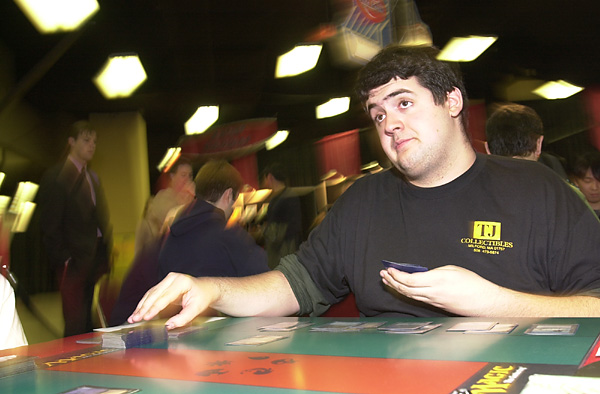 Konstanczer continued attacking as Huey searched for Defiant Falcon. Konstanczer threw another land, at the Defiant Falcon this time and continued attacking. Huey then searched for another Ramosian Sergeant and, following the pattern, it was killed with Rath's Edge. Huey continued his search and retrieved Fresh Volunteers to block the attacking Nether Spirit. Huey then searched yet again for a Defiant Falcon. Konstanczer then asked, "Where'd the Rebel deck come from?" I'm sure he was kicking himself for sideboarding out Tsabo's Decree. But honestly, what other Blue/White deck sideboards in Rebels? Huey went on to search for Lin Sivvi, another Defiant Falcon and Ramosian Sky Marshal.

No longer able to attack, Konstanczer started throwing land at Huey's dome for one a turn. With Huey at two life, he made one last attempt to survive. He cast Lin Sivvi and lost one life from Adarkar Waste putting him at one. With Lin Sivvi on the stack he attempted to counter it with Absorb with the hopes of gaining three life. Konstanczer then Rath's Edged in response and the game, and match were over.