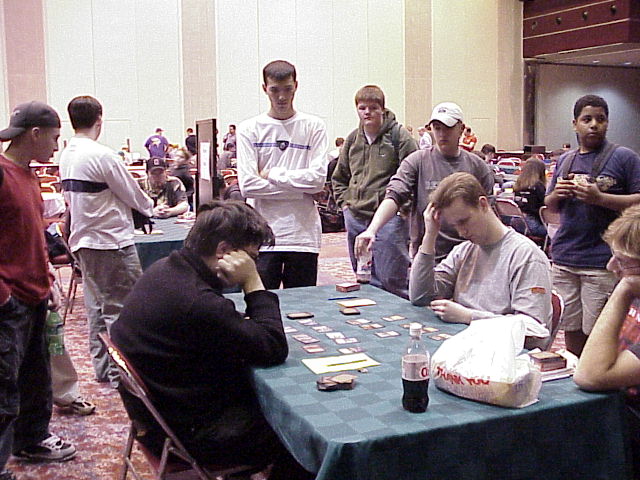 Fresh off his Top 8 at Pro Tour Chicago and his win in the Neutral Ground/Your Move Games Grudge Match, Zvi Mowshowitz took on reigning Player of the Year Bob Maher in a round 4 feature match. Zvi followed "the rule" for this format and built a blue/black/red sealed deck. That appears to be by far the most popular strategy this weekend. However, Maher took a different route. His "5-color green" deck includes all his green mana fixers and all his good cards.

Zvi won the die roll and chose to draw first. Maher played tappers on his first two turns while Zvi played out Vodalian Zombie and Urborg Drake. Maher had Zvi locked down for a few turns, but Zvi just kept playing monsters. Faerie Squadron . . . Rith's Attendant . . . Cinder Shade . . . Meanwhile all Bob had was a Nomadic Elf and a third tapper. Maher was soon forced to try to gang block the Attendant with two Benalish Trappers and a Nomadic Elf. Zvi used Repulse to bounce the Elf and then the Attendant killed a Trapper while still living to tell the story. Maher was in trouble. Three tappers and a grizzly bear just don't cut it when your opponent draws as many monsters as Zvi drew. 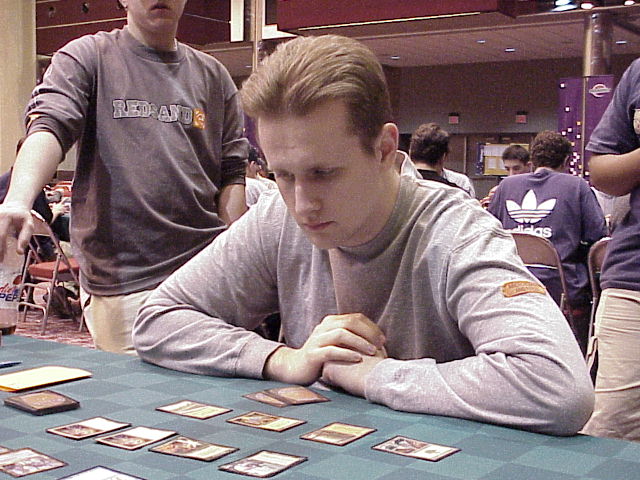 Maher used Fertile Ground to play out a turn three Ancient Kavu in game 2. That stabilized the board and stopped all three of Zvi's zombies (Vodalian, Shivan, and Metathran). Bob and Zvi stared at each other for a few turns and then Maher played Rith, the Awakener. Zvi Repulsed it once, desperately searching for the land he needed to cast the Spinal Embrace that was in his hand. Maher replayed Rith, Zvi still couldn't find land #6, and Maher got to untap and hit him once. Four Saprolings later, Zvi went for Spinal Embrace, but Maher had Repulse ready and saved his Dragon. Two turns after that Maher was up to 11 Saprolings in play. Zvi did manage to kill Rith by putting Exotic Curse on it one turn and Soul Burning it for 3 on the next. However, he couldn't deal with 11 1/1 green creatures and the players soon started shuffling up for game 3. 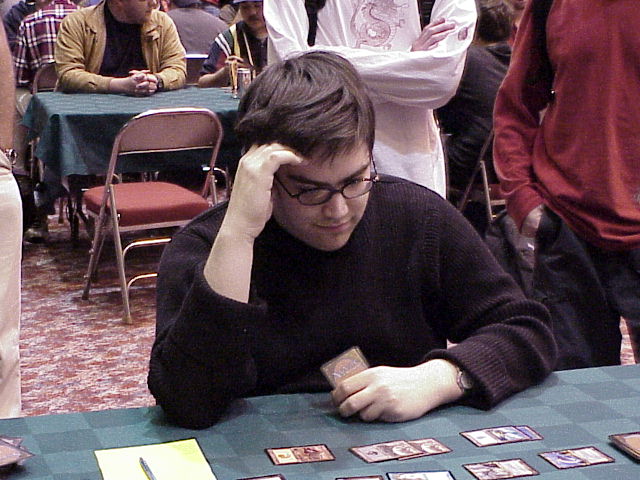 Maher started quickly in game 3 with Yavimaya Barbarian, Pincer Spider, and Obsidian Acolyte. That Acolyte meant trouble for Zvi since his entire had was black. On turn 5 Maher sacrificed a land so he could play Pouncing Kavu with kicker while still leaving a white mana untapped for his Acolyte. Zvi didn't draw black mana until at all until turn 5, but with that Acolyte staring up at him, it really didn't matter. Maher next played Ancient Kavu and then just kept tapping his creatures sideways until Zvi was dead.