Round 4: Flash Back, Flash By

atching Stanislav Cifka dismantle Pro Tour Return to Ravnica with his combo deck, "Sunny Side Up," it only made sense that he was a chess wizard. On camera, he displayed all the focus and precision that one would expect from someone whose official title was International Master. "But wait," said some Doubting Thomases, "Surely he can steer a combo deck, but what about the other facets of pro Magic? How can the student of chess thrive in our world of imperfect information?" To them I say, he may have earned his spot here this weekend by hoisting a Pro Tour trophy, but his performance throughout the season earned him the rights of being the captain for Team Czech Republic, narrowly edging out household name Martin Juza.

Historically, "Outperforming Martin Juza" has a high correlation with excellence.

If you haven't been playing close attention, you might think of Eric Froehlich as just another of the game's better Pro Tour regulars. He may be a member of the old guard, but his return to the Pro scene in 2010 came with a new dedication, and the fact is he's playing the best Magic of his career. Try this on for size: His last three Pro Tour finishes are 10th, 4th, and 27th. Hey may be soft-spoken and reserved, but he has a real passion for the game. Some are already talking about him as a serious Hall of Fame contender. 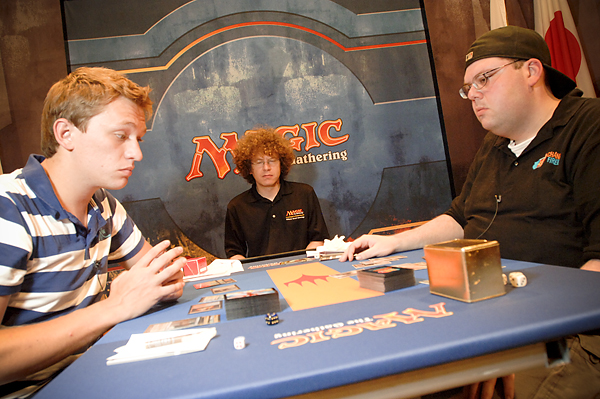 Stanislav Cifka, International Master of chess, was very active with body language in his matches. By contract, Pro Tour Gatecrash Top 4 competitor Eric Froehlich was stone cold at the table, his experience with cards giving him the ability to hold back any motion that could give off information to his opponent.

At the table, they show two different attitudes of concentration. Cifka remains very expressive, through gestures and body language, showing the energy at work behind his actions. If you look closely, you can see him descend through levels of thinking as he addresses a complicated board state.

Froehlich, by contrast, becomes nearly a statue. His features betray no emotion, looking almost bored even as he works out a turn before acting. If the game is utterly lost, he might shake his head very slightly at his misfortune, but that's the most you'll get out of him.

Game 1 started out very well for Froehlich. Cifka had kept a hand of Glacial Fortresses with no way to turn them on, so while he plodded out his mana, Froehlich was free to Farseek into Huntmaster of the Fells. Cifka had Azorius Charm to send the Huntmaster to the top of Froehlich's deck, keeping Froehlich off of five mana. Froehlich replaced the threat with Lifebane Zombie and it gave him good news, as the cards Cifka had to go with his three Glacial Fortresses in play were Desolate Lighthouse, Dissipate, Sphinx's Revelation, Jace, Architect of Thought, Pillar of Flame, and Ætherling. 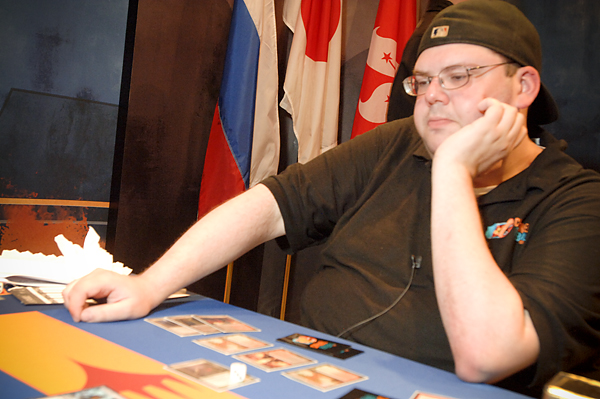 Whether ahead or dead, Froehlich will not let his opponent sense weakness or strength from his actions.

Cifka played Jace, upped his loyalty, and passed. Froehlich attacked him down to two loyalty and took the opportunity to replay his Huntmaster. Unfortunately for Froehlich, Cifka's deck had been kind, serving up both the essential Supreme Verdict and a Clifftop Retreat to give him red mana. Froehlich miracled a Bonfire of the Damned to clear out Jace, but Cifka continued to draw lands, and was soon resolving Sphinx's Revelations for five and six. Froehlich didn't bother continuing the farce.

For Game 2, Efro again had the turn two Farseek. Cifka passed back to him with Island and Sacred Foundry untapped. Froehlich dropped Underworld Connections on an untapped land and passed. All Cifka could do was Think Twice, then untap and Detention Sphere it, giving Froehlich a free card. Froehlich summoned Huntmaster of the Fells and passed. 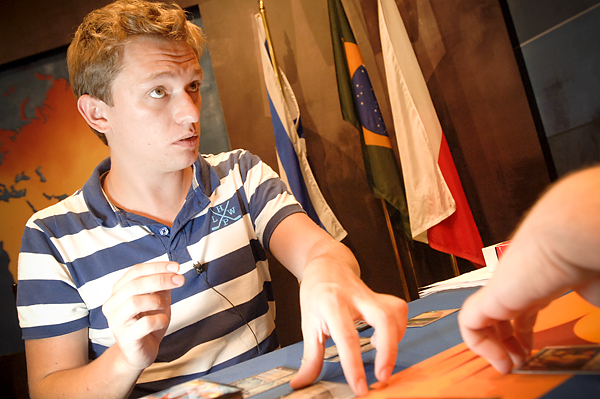 Cifka, despite being very expressive in his matches, acted with a strong, calm, calculating mind.

On his fourth turn, Cifka played Think Twice, then Desolate Lighthouse. Searing Spear took out the Huntmaster when it attacked. Froehlich played another but Cifka had the Supreme Verdict to reset the board. Froehlich made Thragtusk. This time, Cifka's "answer" was Assemble the Legion, but Froehlich was short on gas and unable to remove it. It slowly started to dominate the board. Froehlich drew lands and Farseek without Kessig Wolf Run to make use of them, and could only watch as Cifka's Legion grew. Liliana and Lifebane Zombie showed up far too late to be of use, and Froehlich was overrun by 1/1 soldiers.

"Lifebane Zombie is such a tilting card...to see how dead they're drawing, and then they just hit runner runner..." - Eric Froehlich

I asked him about the matchup, and Froehlich shrugged. "We board in ten cards."

However, Cifka was likewise confident. He noted their playing fewer Snapcaster Mages in anticipation of Scavenging Ooze, and in particular their sideboarding strategy. "Our move was to go more towards 'Tap-Out' and the Assemble the Legions are very good for that."