Round 4: Florent Jeudon vs. Raphaël Gennari 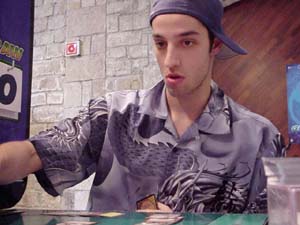 We had a different feature match for you - Olivier Ruel vs. Ferran Vila - but we were forced to change it. Ruel and Vila both made the Top 8 in Biarritz. Unfortunately for Ferran Vila, he decided to head back home today to truly enjoy his three byes and on the way back his car broke down.

So we got another member of Black Ops (Florent Jeudon) against Raphaël Gennari. Not bad for a last minute replacement. The friendly Jeudon might not be as chaotic as Olivier but is also very funny. Like the Ruel brothers he has been working very hard to dismiss the idea that he isn't just another clog on the well-oiled machine we call Black Ops.

If Jeudon is famous for his Limited play (as he recently showed once again by playing in the finals of Grand Prix Antwerp) Raphaël Gennari is probably best known for his green-black "Dark Forces" creation that earned him a Top 8 in Pro Tour-New Orleans. Today he is also the butt of a thousand jokes about his very flashy, and foily, blue sneakers.

Gennari dropped a second turn Thought Eater and a Cephalid Looter. Jeudon could do little else but comment on the plays until he found a Gravegouger to play. Gennari got curious and Peeked finding Cartographer, Moment's Peace, Nantuko Disciple, Centaur Veteran, Faceless Butcher and a fourth land.

Sure enough the Butcher took away the digging Looter and Raphaël used a Refresh to fish for answers. An Aven Fisher sprang forth to trade with the Gravegouger before Jeudon played a Mismeric Fiend to return the Peek. Between Deep Analysis, Krosan Beast and Gravedigger he took the potential green monster.

They took a breather from combat to play a Nantuko Disciple (Jeudon), a Werebear and Deep Analysis (Gennari). The Fiend got bounced but came right back down giving Jeudon food for thought. In the end he took Angel of Retribuition over Krosan Beast, Aven Fisher and Krosan Beast. Gennari's deck might seem eclectic but it was certainly not short on big monsters!

On the next turn the Fisher came in opening way for Krosan Beast. Jeudon was now facing a huge trampler.

Florent (smiling): "That's good."
Raphaël (laughing): "I can assure you it is VERY good."

With a war cry Gennari sent the Threshold-fuelled Beast and Werebear in on the next turn and finished Jeudon of with a Soul Scourger. From the moment he reached critical mana it was a very short and very bloody game. Despite that Florent seemed very sure as he reached for his sideboard.

With thirty minutes still on the clock they traded good luck wishes and started "land, vas-y"ing away. Gennari played a Cephalid Looter.

Raphaël "Show me the Afflict!"

Florent didn't have it but he had a Mesmeric Fiend getting a Chainer's Edict over Centaur Cheftain. The Centaur came in on the next turn and Jeudon was forced to drop a Springing Tiger to balance things out. With the floor locking up Raphaël took up to the skies with a Soul Scourger. Again Florent matched it with a Grotesque Hybrid.

Still the Scourger went in and Jeudon called the bluff by discarding a Roar of the Wurm to lift the Hybrid. Gennari's only answer was Refreshing the Scourger to draw another card. Falling behind on the damage race Florent Zombified the Hybrid only to see Gennari up the ante with an Angel of Retribution.

Faced with a huge flying first striker Florent still seemed pretty confident so Gennari decided to Peek to see what his opponent was up to - Mortivore, Morgue Theft, Narcisism - before using a Fiend to steal the Mortivore. To make way for the Angel he finished his moves by Aether Bursting the Hybrid out of the way and bringing Floreunt down to nine.

With a Roar in the graveyard and a Narcisism in hand Jeudon had some heavy match work to do. He finally decided to send in the Tiger and Hybrid with Narciscism and Nantuko Disciple untapped. It was now Gennari's turn to lapse into thought. He emerged with a plan: block the Tiger with both the Chieftain and the Angel. The Tiger got angry and took out the Angel and suddenly Gennari was back-pedalling.

He showed the deep trouble he was in each time he had to solve the Looter's discard option. He was now apparently resigned to chump blocking while praying for an answer. Out of speed bumps he drew his last card... and scooped. 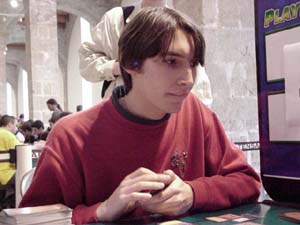 With a mere nine minutes left on the clock they started the third game silently while the crowd murmured around the table. Gennari opened with a Wild Mongrel and Jeudon answered with an Organ Grinder. The Grinder left the game the following turn when a Chieftain steamrolled into the Red Zone. However, the Grinder was quickly replaced by a Faceless Butcher that put an end to Mongrel's plans to raise havoc.

A Fiend revealed a handful of lands and an Engulfing Flames in Florent's hand. When Raphaël again dropped his trusty Angel it looked like the game was about to slow down but Florent wouldn't back down from the race. He played a Roar of the Wurm (for the normal cost) making it clear that if the Angel decided to attack he would bring two monsters to the Red Zone.

Raphaël still attacked with the Angel and played a Scourger signalling the skies as his path to victory. All he needed was a chance to swing with both flyers on the next turn. Did I mention Florent Jeudon wouldn't back down yet? He sent the token, Butcher and Fledgling Imp in an attack that would leave Gennari at six life. Could Raphaël risk it? He decided to take it and see what Jeudon had in store.

A Blazing Salvo took out the Scourger giving Jeudon enough breathing room to take another swing from the Angel. The Angel attacked and Gennari dropped two creatures to block as time was called. They could finally slow down from the lighting place and consider every possibility in the last, and decisive turns, of this exciting last game.

Two Roar tokens and the Butcher attacked, Raphaël took two and returned the Engulfing Flames to Florent Jeudon's hand (since his Fiend had to chump). He then set about digging through his deck before attacking with the Angel finishing the game.