Round 4: Frederico Bastos vs. Jan Tomcani 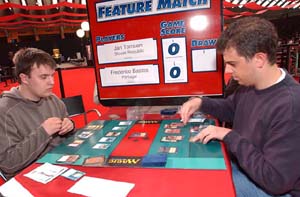 How the mighty have fallen. Jan Tomcani was in the Top 8 in the last World Championship. Frederico Bastos has two Pro Tour Top 8 in his resume. Yet they are sitting at the bottom of the standings today. Jan with three points and Frederico having a nightmarish draft followed by three painful defeats.

Apparently someone thought Portugal and Slovakia has a bitter rivalry so they hoped this match would provide some entertainment. Since the two countries are several hundred miles apart and separated by several other countries it is a bit hard.

Still we aim to please and will keep you posted in case these two start any diplomatic incidents.

Tomcani started with a Nimble Mongoose while Bastos dropped Barbarian Outcast. Tomcani was forced to throw away Hallowed Healer along with Obsessive Search to get two lands with Rites of Springs.

Sensing his opponent was aiming for Threshold the Portuguese played a Gravegouger. Still Jan was not about to change his plans and played Cephalid Broker to continue the digging.

A Petravark came in stealing Tomcani's Plains but Churning Eddy sent it away for a moment. The Gravegouger and the Outcast paid regular trips to the Red Zone while Tomcani refilled his graveyard to pump up Nimble.

A few turns later the Slovakian played Skywing Aven and Hydromorph Gull to completely lock up the game. The best Bastos could do was played a lowly Dusk Imp and stay back hoping to draw something that would help him breakthrough once again.

He regained it somehow when he found his Sengir Vampire.

Jan (in a surprisingly good impression of the Smashing Pumpkins): "The world is a vampire!"

Pump up about his new creature Bastos decided he might as well Mind Sludge away Tomcani's hand. But the Slovakian knows how to top deck.

Jan (drawing and playing Bearscape): "Time to play something good."
Frederico: "That's good but I'm still going to deck you."

Glowing with confidence the proud Tomcani sent his whole crew in. The Portuguese agonized over blocking assignments.

With his library dwindling away - down to six cards by now - Jan Tomcani pressed on with bear-producing enchantment while Bastos tried to cling on to his twelve life points.

Unhinge took Second Thoughts away from the Slovakian's hand. Jan tapped out to get some bear tokens and sent them all in on the next turn. Now at six Bastos needed to stop a grand total of nine creatures totalling eighteen points of damage.

He blocked all that he could and sacrificed his Zombie Assassin to kill one of the remaining tokens to go down all the way to one. He was in big trouble, with only his Sengir Vampire as a blocker.

His draw didn't provide an answer, so he sent in the Vampire for a last stab and scooped. The Slovakian launched into one of trademark cackling wicked laughs minimizing the feeble attempts the lowly Portuguese had made to survive the bearscape massacre.

Jan: "No removal?"
Frederico: "My deck is far from perfect. My initial hand had all my five costing cards so that Eddy really hurt me."

Bastos had to think hard on his second turn Fiend and he ended up settling on a Peek, hoping Jan would miss a few land drops. He followed that up with Unhinge and Pardic Firecat before Tomcani found a blocker: Teroh's Faithful. 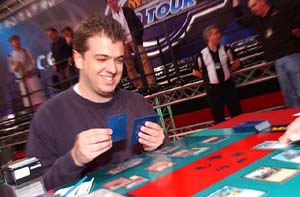 The Portuguese dropped a Sadistic Hypnotist and sacrificed it along with the Firecat to empty Tomcani's hand. But the Slovakian wasn't about to go down without a fight.

He found a Deep Analysis and an Obsessive Search to refill his hand. A second Fiend from Bastos took out an Elephant Ambush before Tomcani could drop a Mystic Visionary.

Despite all the discard the Portuguese couldn't find a way to punish Jan. The Faithful was holding him back. Finally he found a Zombie Assassin to take it out and send his increasingly large army in.

Tomcani top decked a Hallowed Healer but he didn't have the time to use it. He was forced to throw it in front of a Fiend to get back his Ambush.

Bastos played a Crazed Firecat that got some laughs and jokes from the crowd but could get no counters on it. Not that it matter at all since Jan drew his card and scooped faced with an impressive army of small creatures.

The whole Pro Tour stopped in dead silence as the animalistic roar of Portuguese shook the huge domed building. The blood of the helpless Slovakian army still staining the Red Zone only seemed to add more drama to hatred-filled demonic look in Frederico Bastos' contorted face.

So they quickly shuffled heading into the last game of this tense, bitter, battle. The sparks were flying and the trash talking loaded with corrupted innuendos. Or not. Actually they smiled and shuffled in silence.

Again Frederico Bastos had to think hard on his second turn Fiend eventually taking Chepalid Broker. During the next turns Jan played Skywing Aven and Nantuko Disciple while Bastos played Barbarian Lunatic and used it to kill the Disciple.

Tomcani Peeked seeing no immediate trouble ahead but was surprised to find Bastos was a top decking monster: he pulled Sengir Vampire to put the slouching Tomcani into trouble.

The best answer the Slovakian could muster was a Hallowed Healer while he sat on the Second Thoughts Bastos had seen earlier. Cunningly the Portuguese waited for his Petravark to steal the only Plains Tomcani had before applying what promised to be the first of a short and bloody series of Sengir beatings.

Elephant Ambush and Churning Eddy showed some spirit from the Slovakian who was fighting hard to regain control of the table. He dug deep with Deep Analysis and Careful Study while Bastos brought forth a truckload of creatures.

Just as the Portuguese seemed to have reach critical mass for a final attack, Tomcani played Bearscape. The tables had turned once again. It was Bastos' turn to slouch in his chair.

He played Skeleton Scrying for one and braced himself for the first wave of token attacks. After some extra effort from Barbarian Lunatic Bastos' survived the first wave at five life.

He still couldn't quite trust an all out attack as Tomcani once again had white mana, this time in the shape of Timberland Ruins. Finally the Portuguese seemed to have amassed a large enough wall of blockers to keep Jan Tomcani, now without graveyard, out of the Red Zone.

Frederico: "Now, that is BIG!"

Still he brought it down with his Zombie Assassin. The silent Tomcani used Obsessive Search to look for another answer to the stalemate as Frederico's overworked Lunatics went bear hunting in Slovakia.

The Portuguese finally found his Sadistic Hypnotist, just as time was called and used it to remove Tomcani's entire hand. 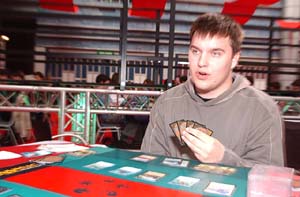 Frederico: "I don't think I can win this one. Can you?"

Indeed the two huge walls of creatures staring at each other seemed something out of a very wicked Mark Rosewater puzzle. They went through the five extra turns very carefully, knowing a simple mistake could cost them the match.

The Portuguese took the forbidden peak at the top card in his deck and saw the perfect answer to the stalemate: Soul Scourger.

And so it ended another chapter of the long and bitter rivalry between not so close neighbors Portugal and Slovakia: With promises of new battles and new curses. Or not. They just shook hands, smiled and went about their ways hoping for better luck at future big events for two very good European players.