Round 4:
Fulmination against Liberation

Round 4 saw Christian Calcano of the USA up against Geoffrey Siron of Belgium. Calcano racked up his first Grand Prix win earlier in the year with a Blue-Red Delver of Secrets deck in Minneapolis, and is now gleefully flying the flag for the Izzet guild here at Pro Tour Return to Ravnica.

Siron has had a great deal of success in Constructed in the last twelve months at the Grand Prix level, but it has been a while since his last big finish on the Pro Tour.

Calcano won the roll, and chose to keep his seven, leading with a Treetop Village. Siron had an Urza's Mine and Expedition Map. It was clear that Siron was on the Tron big mana plan, but it was not yet obvious if he was the Red-Green version, or perhaps the White-Blue version.

Calcano seemed un-phased in either case. He had a Thoughtseize to find out. He saw Oblivion Stone, Urza's Tower, Relic of Progenitus, Pyroclasm, Chromatic Sphere and Magma Jet. Pyroclasm hit the graveyard, and Calcano continued his game plan with a Noble Hierarch.

Calcano had suggested during the player's party on Thursday night that he had a pretty sweet deck for this event, and when he cast a Loxodon Smiter on turn three, it certainly met a raised eyebrow from his opponent. 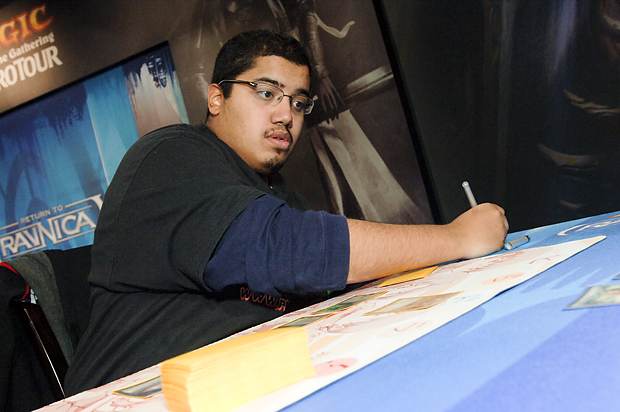 Christian Calcano's Doran deck had a few new cards that were good at catching its opponents off guard.

Siron had a fine answer though, playing his third Tron piece on turn three, and dropping Karn Liberated onto the board. The planeswalker ate Calcano's Overgrown Tomb, leaving the American with just a pair of copies of Treetop Village as lands and a Noble Hierarch as to round out his mana. Calcano still had enough to cast a Kitchen Finks, keeping his board advancing.

Loxodon Smiter took out Karn Liberated, but Siron didn't seem to mind, following up with an Oblivion Stone and mana available to activate it. When the stone popped (right as Calcano was attacking), the New Yorker's response was to hit his own Noble Hierarch with Path to Exile in order to fetch up a Swamp.

That Swamp meant that the very next turn, after Siron had played a land and passed, Calcano was able to cast a Dark Confidant, who soon brought him well ahead on lands. Another Loxodon Smiter forced more copies of Oblivion Stone from Siron.

It is hard to run out of gas when Dark Confidant is involved though, and Calcano had a follow-up copy of the Ravnica: City of Guilds rare with which to keep forcing threats against Siron. Siron tried to hit the 2/1 with Magma Jet, but for the second time in the game, Calcano decided he'd rather send it on a Path to Exile, getting a land and denying his opponent's ability to scry for 2.

Now it was time for Calcano's Treetop Village plan to come to fruition. He attacked Siron to 11 and looked on as Karn Liberated came along. The planeswalker nabbed a Marsh Flats from Calcano's hand, going to 10 loyalty in the process. Calcano attacked in for 9, only for a Magma Jet on a Kitchen Finks to drop the amount of damage coming to 6 as Siron went to 5.

Calcano was on the play for game 2, and looking to put things away without the irksome issue of a turn three Karn Liberated to deal with. He led off with Deathrite Shaman, and could only shake his head as he saw a turn one Urza's Mine into Expedition map. Could there be another turn three Karn Liberated coming? Dark Confidant came from Calcano, while Siron had Urza's Power Plant for turn two.

When Siron fetched Eye of Ugin at the end of turn on Calcano's turn three, it met a smile from the New Yorker. "This can't be good..." he said. Siron had his Urzatron and a Wurmcoil Engine to cast for his turn. This shut down the Calcano offense, which had only grown with Thalia, Guardian of Thraben joining the ranks. 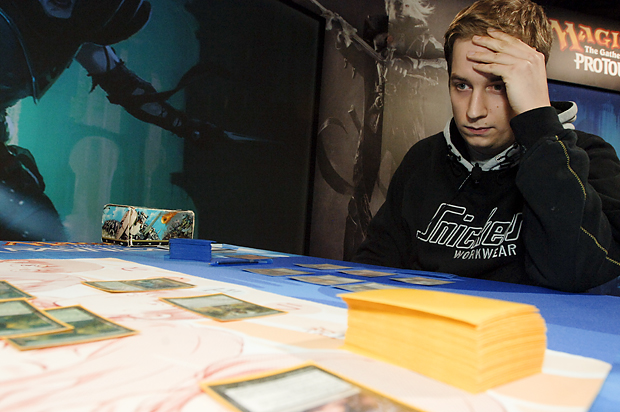 Geoffrey Siron's Tron deck can power out some powerful monsters with its colorless mana.

Path to Exile came from Calcano, effectively clearing a route for his team to attack, as the assault took Siron to 12. Siron kept the hits coming with Karn Liberated. The hefty planeswalker removed Thalia from the game. Calcano had a Tarmogoyf and a Thoughtseize to get rid of Magma Jet. It also revealed two more copies of Karn Liberated in Siron's hand. Suddenly it seemed that there was a clear and present danger of Calcano losing a lot of permanents.

The New Yorker was not about to lie down. He had a Fulminator Mage to break up Siron's Urzatron, and attacked the Belgian down to 4 life. That was enough to square things up, as Siron's draw did not find him an answer in time. It was on to third and final game.

For the deciding game, it would be Siron on the play for the first time in the match. Given then explosiveness of his early plays in preceding matches, this could prove decisive. Siron did not have the turn three Tron this time though, with a Forest coming to slow down his draws. Those draws got increasingly clunky as Calcano played out a Stony Silence. The Expedition Map and Chromatic Star Siron were effectively neutered, meaning that Siron had a bit of work to get into a favorable spot.

Tarmogoyf was the next play of the game, again from Calcano. The Future Sight rare was not a colossal monster, but as the only threat on the board, it was still a concern for Siron. Calcano briefly committed a Fulminator Mage to play, but it soon sacrificed itself to keep Siron off mana and pump the Tarmogoyf.

Siron was on the ropes, and Calcano turned the screws with Treetop Village to help attacking and a Dark Confidant to provide a steady flow of cards. Pyroclasm could only deal with Dark Confidant, and when a second Tarmogoyf joined the team, it was all over. Siron extended his hand to Calcano who advanced to a 3-1 record.