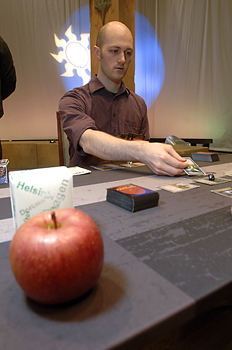 Brandon Scheel ignores the apple, but it’s there. Taunting him.”I just made the best purchase of my life,” Luis Scott-Vargas beamed as he came to grab his seat at the table. “There was a guy with a bag of apples, and I bought one.”

His opponent this round, Brandon Scheel, looked longingly at the piece of fruit taunting him from LSV’s side of the table.

“He offered it to me for free, but I gave him 150 anyway,” said LSV, the consummate gentleman. While shuffling, he admitted that he’d “lost every Game 1 so far today.” After mulliganing, he offered up, “I’ve mulliganed every Game 1 as well. I am 3-0, though, so I probably shouldn’t complain.”

While Scheel was resolving a couple mulligans of his own, the pair switched the topic of conversation to the upcoming Grand Prix—Chicago.

“You going to Chicago?” LSV asked Scheel as he shuffled his deck.

“I don’t know. I’m technically skipping my six-month anniversary with my girlfriend to be here. So before I looked up the date for Chicago, I told her I’d make it up to her next week. Moral of the story: always look up dates first.”

LSV started off the first game with a Tidehollow Sculler, stripping Scheel of his only real business spell: a Sower of Temptation. He followed that up with a Glorious Anthem and Ajani Goldmane on consecutive turns. Turn four saw a Glen Elendra Archmage from Scheel, followed by a Mulldrifter, which started to make up the card disadvantage he had by mulliganing twice this game.

Meanwhile, LSV had made a Knight of Meadowgrain, and he enhanced his creatures with a second Glorious Anthem before attacking Scheel for what would be lethal damage. Scheel couldn’t counter the second Anthem since he had to tap out to play the Mulldrifter. This forced him to chump block with the Drifter just to stay alive. He played a Reveillark on the following turn, but even with the big flier, he couldn’t delay the inevitable any longer, and he conceded after LSV swung over on the following turn. This game was lightning quick and over after a mere six minutes of play. 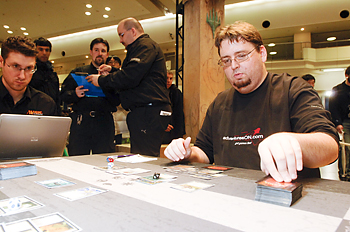 Luis Scott-Vargas and his apple wage subtle psychological warfare.Scheel started the second game off with another inauspicious mulligan. LSV started a little slower on the second game, with merely a Windbrisk Heights and an Arcane Sanctum on his first two turns. He did make it up with a Spectral Procession on the following turn to match Scheel’s Stillmoon Cavalier. Scheel’s Sower of Temptation had to settle for a less tasty than usual target, opting to steal a Spirit token from LSV. It was quickly replaced, though, and a second Spectral Procession from LSV once again clouded the skies. When Scheel tried to make a Glen Elendra Archmage on the next turn, LSV used Path to Exile to remove the Sower in response, regaining his rogue Spirit token (not to be confused with a Rogue Spirit token).

A third Spectral Procession from LSV forced Scheel to pop his Archmage, tapping out. With Scheel now more or less helpless, LSV sent his team across to say hello. This dropped Scheel to 14 and turned on the Windbrisk Heights that had a Head Games hidden away. Head Games is amazing against control if you can find the window in which to use it, and for LSV, it simply made sure that Scheel was going to have to get amazingly lucky to draw out of this. His new two-card hand, compliments of the gentlemanly LSV, was a Caves of Koilos and an Island. This was going to be rough.

Things went from bad to terribad when LSV bolstered his already ridiculous army with a Glorious Anthem before attacking. After a couple more attacks, and no real interruption from Scheel, LSV finished off this ludicrously fast match.