Round 4: Gab Tsang vs. Dave Humpherys 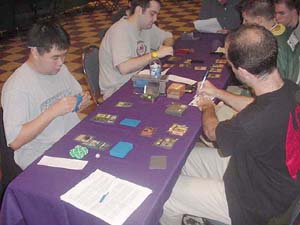 Gab Tsang seems never to go away. Just when it looks like his Pro career has taken a turn for the worse, he busts back on the scene with an impressive finish. This year it was at Grand Prix Cleveland, where he finished 2nd after claiming to have never practiced the format. This time, the format is limited, his strong suit, and he wants to improve on that 2nd.

Dave Humpherys has never gone away, either, and that isn't a surprise to anyone. "The Hump" has been finishing high at events ever since the Pro Tour's inception, and his attendance at this year's Invitational based on Pro Points is indication that he isn't slowing down.

There was significant posturing between the veterans before the match began. Humpherys ripped off his sweater to reveal the familiar Your Move Games t-shirt beneath, and claimed that Gab was intimidated.

Gab simply commented that the tables were a little narrower than normal at this event, adding, "That isn't necessarily a bad thing. It's easier to physically attack my opponent when I lose."

Gab then seemed to suddenly remember who he was playing against, and said that he wished he could "tag in David Rood," to play for him, explaining that Gab himself was 0-3 lifetime versus the Hump, whereas Rood was 4-0.

Gab started of with an Elvish Warrior which was immediately trumped by the Hump's Wretched Anurid. Gab cast a morph creature and passed, then used both his guys to block the oncoming Anurid. Hump chose to kill the 2/3, and made a morph of his own.

Gab swung in for 2 and cast a Wirewood Elf. The Hump attacked back, and Glocked the 2/2 with his 1/2, representing Vitality Charm. Sure enough, when the Hump passed priority, Gab cast the green instant. But the Hump showed his morph to be the 3/1 first striking Battering Craghorn, earning a nifty 2-for-0. 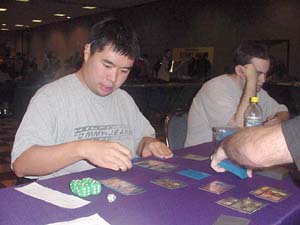 If the rules allowed first strike damage to be put on the stack even if no first strikers were in play, Gab may have been able to avoid getting wrecked. But, alas, that's not how the game works.

The Hump made a 4/3 Charging Slateback, and Gab answered with his own 4/3, the unblockable Anurid Murkdiver. Hump swung in with his Beasts for 7, then dropped a Headhunter and a Rotlung Reanimator (eliciting, "Oooh, that guy's a nice one" from Gab).

Gab stayed calm, however, swampwalked for 4, and played a Nantuko Husk followed by a Crown of Suspicion on Hump's Slateback. That way, when the Hump attacked, Gab could sacrifice the Crown, killing the Craghorn and making the Slateback 6/2 – the perfect size for trading with a Husk.

The Hump had his own plans, and killed Gab's morph (Snarling Undorak) with Cruel Revival, retrieving his own 3/3 Anurid. Then prescribed attacking/Crowning/trading bit occurred, leaving Gab a little short on defense.

Fortunately for him, he drew the sturdy 2/7 Silklash Spider, played it, then swampwalked for 4 again. The Spider did the rest, preventing Humpherys from mounting a good attack, and the Murkdiver applied the killing blows over the next two turns.

The Hump came out strong in Game 2 with a Wretched Anurid, but it quickly turned sour when he missed his third land drop and had to settle for an unmorphed Headhunter. 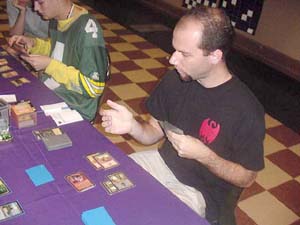 Gab dropped a Shepherd of Rot and a Nantuko Husk, and the Shepherd ended up trading with the Anurid. The Hump eventually found more land, but Gab had deployed a 4/4 Soulless One that was looking to end things in a hurry.

The Hump did manage to start casting spells, but because of his land problems it was like he was two turns behind. Barkhide Mauler, Silklash Spider, and Krosan Tusker from Gab were too much.

Gab finally broke the string and finally managed to defeat Humpherys in a sanctioned match.