Round 4: Gab Tsang vs. Noah Boeken 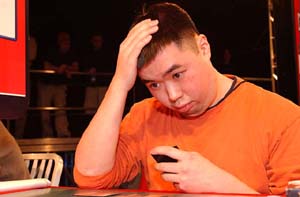 Round four of a draft Pro Tour is always interesting because players with different records play against each other. Canadian "Juggernaut" Gab Tsang already "won the table" by being the only person to win each of the first three rounds. Along the way Tsang handed defending champion Mike Pustilnik the first of his three straight losses to open the tournament. However in round 4 Tsang still had to take on 2-1 Dutchman Noah Boeken before the players got put into a second set of draft pods. Noah complained loudly before the mach started that Gab was "very lucky" because he sat in front of Boeken and took all of Boeken's cards. Boeken was particularly upset that Tsang had switched into blue rather than pass Boeken an Aboshan.

Tsang got in some early beats with his dogs (Patrol Hound and Phantom Hound) and then once Boeken played a Dirty Wererat to block on the ground, Tsang took his attack to the air with Pulsating Illusion and Aven Windreader. Boeken quickly gained superiority on the ground, but he couldn't do anything about the fliers so his 9-power worth of attackers just didn't look like they had enough time. Tsang flew over for lethal damage, but Boeken had Moment's Peace! The fog (and the ability to fog again on the following turn) changed everything and when Boeken sacrificed a couple lands and discarded a couple more cards to gain threshold, his ground monsters were suddenly attacking for 16 and his position was unassailable. 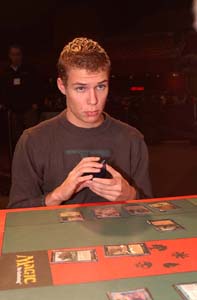 Boeken continued his incessant giggling when he got to put Psionic Gift on his Werebear at the beginning of game 2 and kill Tsang's Cephalid Looter. Tsang got the next laugh, though. Not only did he successfully Predict that he had an Island on top of his library, but he also drew Aboshan. The Cephalid Emperor quickly began to take over the game. However, Boeken had one of the best answers possible: he used Cultural Exchange to send Tsang a lowly 1/1 squirrel token and take control over the mighty Aboshan. "You hate-drafted it, but I got it anyway!" After a couple of turns of lockdown, Tsang went ahead and conceded the game and match. He had no way in his entire deck to deal with Aboshan.