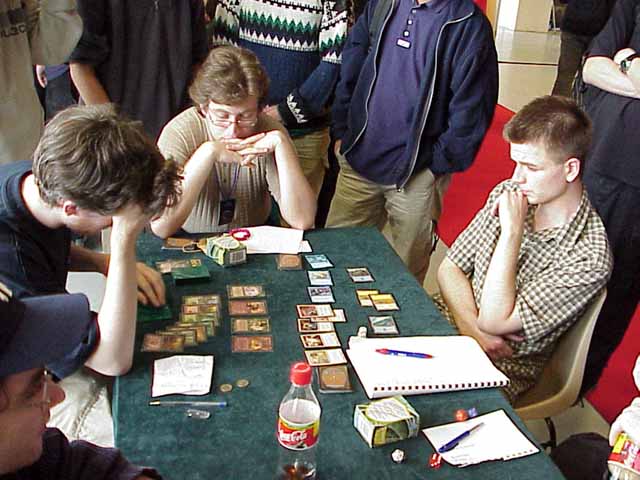 Papp may not be well known to players around the World, but he has good reason to be one of those selected to play in the feature matches. He was among the top 8 finishers in the first European Championship held two years ago. He is trying for a repeat performance, going into this match with a 3-0 record.

On the other side of the table is John Ormerod - one of the top British players who was instrumental in designing the NecroPebbles Extended deck that dominated Pro Tour: Chicago.

To say that Ormerod's green-red deck is good would be an understatement. He has an extremely solid creature base and splashes for some very powerful red cards. Since Ormerod is not playing a lot of Mountains he chose to keep a Flowstone Overseer in his sideboard - an unconventional decision to say the least, as it is one of the strongest creatures in the format.

In the first game Papp's flying creatures came out en force, but he drew nothing to hold Ormerod's larger ground creatures at bay. Ormerod cast a pair of Silt Crawlers, a Silverglade Elemental and Stampede Driver to make sure Papp could not even chump-block some of the creatures.

Papp used his Ensnare to effectively Fog for a turn and then drew into a Rhystic Shield. This would allow him to block the two Slit Crawlers for a turn and not lose any creatures, even if Stampede Driver is used.

As expected, Ormerod attacked with all creatures and Papp blocked the two Crawlers. Ormerod then activated his Stampede Driver and announced that he will be assigning lethal damage to ONE of the two creatures blocking each Crawler and trampling the rest of the damage over to Papp. 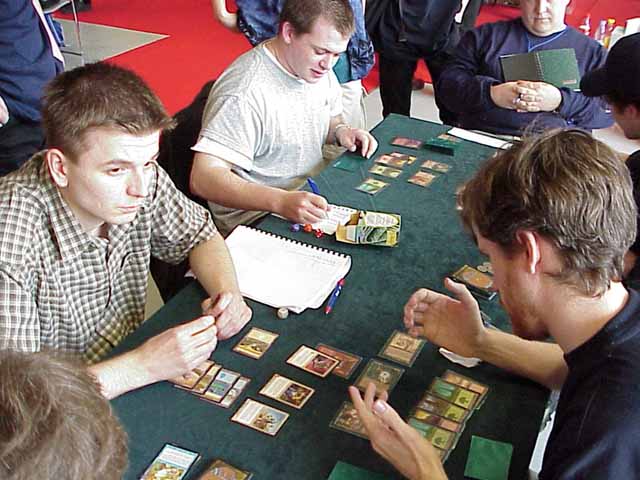 If you think something is wrong with that play, congratulations - you know the trample rule better than the two competitors in this match. The way Trample ability is currently worded, it is not possible to assign damage to a player until lethal damage is assigned to all creatures involved in combat. Papp did not know this and scooped up his cards, assuming he just lost the game.

The judges were summoned quickly as both players realized their mistake. Ormerod was given a warning, but it was not possible to revoke the concession by Papp. Neither player was upset though. It was pretty clear that Ormerod was going to win that game anyway over the next few turns. It was furthermore pretty clear that Ormerod made an honest mistake rather than attempt to cheat his opponent.

Second game went better for the Hungarian player. He dropped a turn three Troubled Healer and a turn 4 Lightbringer, able to hold off Ormerod's early creature. Ormerod cast a Blastoderm and it looked like he'd be able to start applying some pressure to his opponent, but Papp cast a Bribery, summoning the mighty Two-Headed Dragon out of Ormerod's deck! To make matters worse for the British competitor, Papp had some Mountains in play in addition to his Islands and Plains! Throughout the match he never cast any red cards, but it is safe to assume he was splashing them for a couple of powerful spells.

Two-Headed Dragon backed up by the Healer was able to outrace Ormerod's horde of green creatures in a few turns, bringing the game score to 1-1.

Third game was a nail biter. Troubled Healer was able to show up early in the game again, allowing Papp to hold off Ormerod's creatures while attacking in the air. This time around it was Ormerod's turn to cast his Two-Headed Dragon though and force Papp into defensive position again.

Time was running out at this point, and players entered the five additional turns while both at very low life totals. Two-Headed Dragon attacked and Papp risked sacrificing all of his remaining lands to save both Voice of Truth and Defiant Falcon that were blocking the Dragon. Ormerod went on to sacrifice his Giant Caterpillar in order to make another flying creature - a 1/1 Butterfly token.

Papp attacked with his Spiketail Drake and an unblockable Blockade Runner and Ormerod blocked the Drake with a Butterfly, then regenerated it with Rushwood Herbalist.

About to die next turn, Ormerod went in for the final aerial attack with a Dragon and a Butterfly. Papp was forced to double-block the Dragon again. Triumphantly, Ormerod Invigorated the Butterfly, dealing enough damage to Papp to steal the game.