Round 4: Gabriel Nassif vs. William Jensen 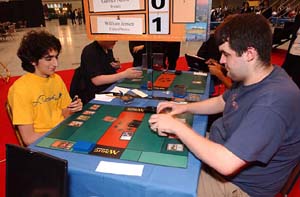 William "Baby Huey" Jensen has made Top 8 in the last two Pro Tours, and is looking to make it a three-peat this week. The only player to accomplish three Pro Tour Top 8s in a row so far is Scott Johns. Jensen has long been considered one of the best players in America, and lately he's putting up finishes to prove that he is indeed among the elite. So far he's deviated from his plan, and came into this Feature Match a disappointing 1-2. Nassif is in the same boat. He's had a pretty good weekend so far, advancing to the finals of the Masters. He's already guaranteed to leave Yokohama with a great deal of money, but would like to collect a second paycheck in the Pro Tour. Only one of these two can make that happen.

Nassif started with Goblin Sledder, while Jensen played Riptide Biologist, followed by Mistform Wall. Wirewood Herald showed up, and Jensen took full control of the game, playing Lavamancer's Skill on the wall, and a Sparksmith. 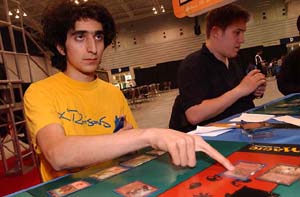 Chain of Plasma killed the Sparksmith, but Jensen was already far ahead with two morphs, the Skilled Wall and a Biologist to Nassif's empty board. Spitting Gourna provided some defense, and blocked a morph; with the help of the wall, it was a trade. Disruptive Pitmage countered Goblin Machinist, and Nassif conceded.

Jensen had a second turn Biologist and third turn morph creature, while Nassif played his first creature in Goblin Sledder turn four. Nassif played Gratuitous Violence turn five, but with only a 1/1 Goblin out it didn't seem too intimidating. Choking Tethers tapped it down on end step to clear the way for Crested Craghorn to attack along with the rest of Jensen's team. Needleshot Gourna died thanks to Craghorn, with the help of a Skilled Biologist and Aphetto Alchemist. Sparksmith joined soon after, and Jensen's board position was terrific.

However, Nassif was not out. He killed Sparksmith with Chain of Plasma, and Crested Craghorn dealt with the Mistform Wall. He had to cycle two off-color cards, showing that his deck was a bit less than optimal. Goblin Machinist gave him a potentially deadly creature with all the lands he had out, so Jensen simply played Primoc Escapee and ended his turn, 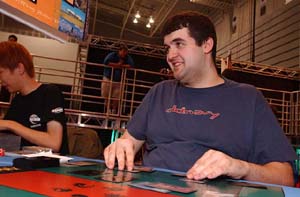 Nassif- "Are the cards in your hand good?"

Jensen- "Yeah. I'll bet you $20 that they are. Never mind, I don't want to take your money or hurt your pride."

The Machinist was chump blocked by the Alchemist, and activated twice, hitting Solar Blast and Symbiotic Wurm. Jensen seemed scared for a moment as Vitality Charm would have given the Machinist trample and more than enough to get lethal damage through, but Nassif just wanted to see his opponent sweat a little before conceding.