oor Ben Rubin. Despite being one of the true all stars of the Pro Tour, bursting on to the scene as a teenager on his way to a Hall of Fame career, Ben was left off the opening announcements informing the expo center of the (ten!) Hall of Famers in the main event this weekend. The good-natured American laughed off the faux pas with his California grin, but as he sat down against Canadian Rich Hoaen, he was all business. His opponent is better known for his drafting prowess than for Block Constructed. In fact, Hoaen is regarded as one of the top Limited players the Pro Tour has ever known.

"Good luck dude," Rich said after handing Ben his deck back from cutting.

"Thanks!" Ben replied with a smile. Rich laughed at the comedic slight from Ben, who hadn't offered up the "polite" response of "You too!" but karma quickly paid Ben back: his opening hand didn't give him the goods and he was forced to mulligan. 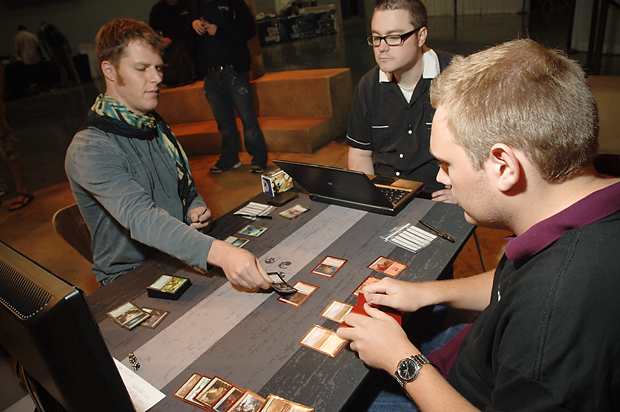 Ben Rubin and Rich Hoaen battle in the Arena.

Rich started on Steppe Lynx, but had his 0/1 killed by a Vendetta from Ben. Plated Geopede was Hoaen's next creature, though the 1/1 first striker had to stare down a Lotus Cobra from Rubin. Staggershock dealt with Rubin's creature, then dropped Ben to 11 on the rebound. Goblin Guide joined Team Canada's side of the battlefield and rumbled in alongside the Geopede, a 5/5 after the use of a fetch land. Smother took care of the bigger of the two, with the Goblin Guide further depleting Ben's life to 9.

A second Staggershock made it 16-5 in Rich's favor, then Hoaen cast Stoneforge Mystic for Adventuring Gear, cast it, equipped it to the Goblin Guide, then played Arid Mesa. That was all Ben Rubin needed to see, and he moved to his sideboard.

The game had taken a whopping seven minutes.

The first game had been short and for Rich Hoaen sweet as he looked to start the second game off in similar fashion. His first play: Goblin Guide, though it was after Rubin had dropped Khalni Garden on his first turn for a 0/1 Plant. Explore helped Rubin to keep up pace, accelerating his mana by one extra land-drop before he passed.

Hoaen kept his beat on for his second turn, but his Goblin Guide was blocked by the Plant token that Rubin's Khalni Garden had generated. Steppe Lynx joined Hoaen's team, but Rubin continued to build a massive board presence, with a second Explore dropping a second Khalni Garden and putting him two lands up on his opponent. If he managed to survive the early aggression, which his 0/1 Plants would help with, Rubin would be in good position.

Marsh Flats for Rich found him his third land and made Steppe Lynx a 4/5, and he tapped out to cast Cunning Sparkmage and blow up his opponent's Plant. He then attacked for 6, making the score 18-11 in his favor. The start was certainly aggressive, but Rubin was about to untap with access to as much as six mana. Would Rich be able to hold on long enough to seal the deal?

Rubin's first play was Jace, the Mind Sculptor which Unsummoned Cunning Sparkmage. He then dropped his sixth land, a Swamp, and ominously passed the turn. Having already shown both Smother and Vendetta in the first game, it seemed very likely Rubin had some type of spot removal at the ready. Before attacking, Hoaen cast Kor Skyfisher to return a land to his hand allowing him to pump his Steppe Lynx by replaying it. He sent his team sideways and Rubin did indeed have a removal spell: Smother targeting Goblin Guide. The 2/3 Steppe Lynx was Ben's other potential target, and it seemed like Smothering the Goblin Guide, which had already drawn Ben a few extra lands in the game, was the weaker of the two. But the Hall of Famer didn't make it there for nothing, and knew a Vendetta targeting a 0/1 Steppe Lynx could save him life in the long term in addition to the fact the Lynx would need Hoaen to keep playing lands to be more than a 0-powered threat. 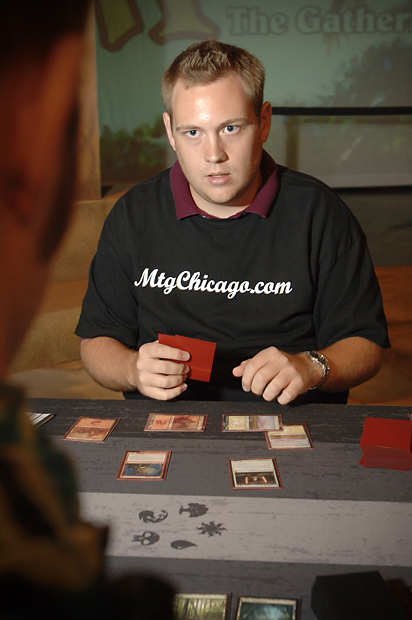 Draft all-star Richard Hoaen is no slouch at Block Constructed, but can he pull this one out?

At seven mana, Ben tapped out to cast Avenger of Zendikar, netting himself seven Plant tokens. He also bounced Kor Skyfisher with Jace to make sure no evasive creatures were coming in, and passed. Rich switched to the burn plan, opting not to cast any creatures and no doubt holding Staggershocks and Burst Lightnings. When Rubin cast a Pelakka Wurm, however, Hoaen didn't even bother.

"You got me," he said, scooping up his board. With Ben back to 15 life and with a horde of creatures headed his way, Rich knew battling on would be a futile effort. The Canadian couldn't hold on for the win.

Steppe Lynx kicked the third game off for Hoaen, but it was killed quickly by Vendetta after being chumped by a Khalni Garden Plant token. Kor Skyfisher was second up for Rich, followed by Goblin Guide while Rubin simply played lands. A Smother took out the 2/3 Kor Skyfisher, and it wasn't looking good for Rich Hoaen. While Ben hadn't accelerated his mana base with Explores as he had in the second game, Rich's start wasn't exactly overpowering.

While he hadn't been able to start on Explore, Rubin did have an accelerant in the form of Oracle of Mul Daya. The 2/2 allowed Rubin one extra land, then died to Staggershock while Goblin Guide continued attacking, leaving the scores 18-13 in Rich's favor. An unkicked Sphinx of Lost Truths for Ben shut off attacks from the Guide, but Cunning Sparkmage allowed Rich to get a few extra points in outside the combat step. 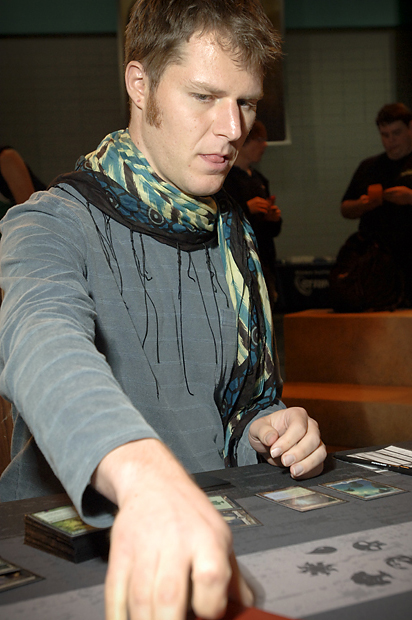 The 0/1 didn't have very long to work that angle, however, as Jace, the Mind Sculptor hit for Rubin, finding him Smother to kill ol' Sparky. Hoaen cast Plated Geopede, but when Rubin had Avenger of Zendikar for seven Plants, a Misty Rainforest to make them all 1/2s, and a peek from Jace to make sure Rich's draw was Evolving Wilds.

"Is it a good one?" Rich asked, jokingly.

"No," Rubin replied, matter of factly.

When Rich discovered his opponent wasn't putting him on, he scooped.