Friends and teammates. And despite being rivals in this event, they certainly weren't bitter about it.

The groups ultimately settled on two very different decks for this event. Ochoa and his collaborators went with a lightning fast Domain Zoo deck, while Nakamura opted to pilot a Jund deck that is chock full of removal and two for ones.

Ochoa won the roll and got off to a fast start with Steppe Lynx and Qasali Pridemage, while Nakamura spent his early turns tearing apart his opponent's hand with two copies of Inquisition of Kozilek.

After picking apart Ochoa's hand, Nakamura decided that it was time to take over the board. First Nakamura played a Tarmogoyf, which stopped any attacks from happening, and then he followed it up with a Jund Charm that left Ochoa without a single creature. 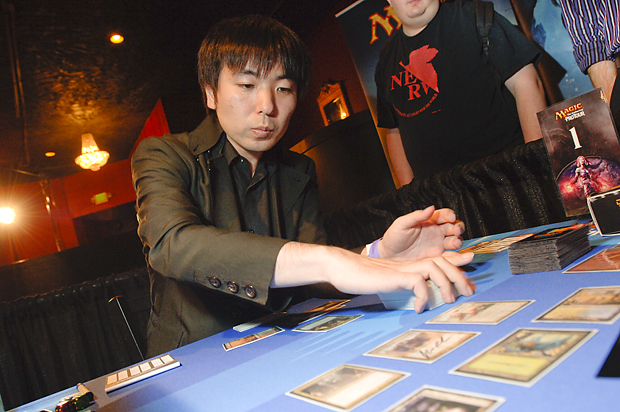 Shuuhei Nakamura clears the path with his powerful Jund deck.

Ochoa bought himself some time by using Snapcaster Mage to flashback Tribal Flames, and take out the 4/5 Tarmogoyf, but without anything left in reserve, he could do nothing to stop Nakamura from taking the first game with Bloodbraid Elf, Dark Confidant, and Kitchen Finks.

Ochoa got off to another quick start in the second game with a Kird Ape and a Loam Lion. Fully aware of how much pressure he was under, Nakamura hoped that he could stem the bleeding with a Tarmogoyf followed by a Kitchen Finks, but Lightning Helix and Path to Exile left the Japanese pro without any defenses.

Ochoa further pressed his advantage with a Tarmogoyf, putting Nakamura into a spot where he had to hope that his Bloodbraid Elf cascaded into something great so that he could even have a chance of crawling back into the game.

The Bloodbraid Elf found a Pyroclasm. However, all of Ochoa's creatures had at least three toughness! Consequently, the sometimes-devastating board sweeper failed to do anything.

An attack and a Lightning Bolt later, and the players were off to a deciding third game.

After seeing Jund Charm and Pyroclasm out of his opponent's deck, Ochoa decided that he needed to make some significant changes to his deck for the third game. In order to make himself a bit more resilient against his opponent's sweepers, Ochoa took out his Steppe Lynxes and replaced them with bigger threats.

Ochoa took a mulligan and began the game without a one drop or a two drop, making Nakamura's turn-three Kitchen Finks the first play of the game. Ochoa finally got something on the board when he cast a Geist of Saint Traft, but that wasn't long for the world as a Bloodbraid Elf cascaded into a Liliana of the Veil, which promptly ate Ochoa's only creature.

Ochoa then hoped to get himself into the lead with a Tarmogoyf backed up by a hand full of removal spells. However, an Inquisiton of Kozilek, a Thoughtseize, and a Liliana of the Veil activation left Ochoa in a particularly dire situation.

But when Ochoa's draw step yielded him an Elspeth, Knight-Errant, suddenly it was Nakamura who found himself back-pedaling. 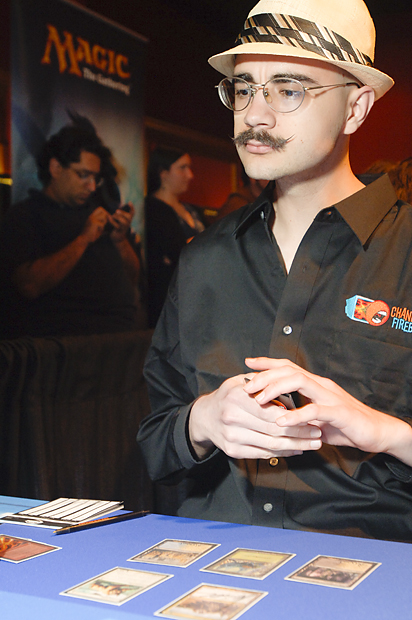 David Ochoa's Zoo deck packs plenty of fire power, and when staring down multiple sweepers, it can also pack a little planeswalker power as well.

Nakamura began working his way back into a good position by using a Lightning Bolt to take out a Soldier token and a Liliana of the Veil activation to kill off Ochoa's Tarmogoyf, but Ochoa found himself a replacement Tarmogoyf on his very next turn.

At this point, Ochoa's deck stopped yielding him anything of note, giving Nakamura the time that he needed to take over the game with a pair of Bloodbraid Elves (finding Tarmogoyf and Liliana of the Veil).

When Nakamura used a Terminate to take out Ochoa's own Tarmogoyf, it was only a matter of time before the Japanese pro was able to triumph over his mustachioed foe.