Tsumura is currently in second place in a tight Player of the Year race featuring him, Masashi Oiso, and Olivier Ruel. He has been playing amazing Magic this year and is no stranger to the feature match area. Today he has brought the Japanese White-green deck that has been impressing everyone with its strong matchups against much of the field.

Eivind Nitter, on the other hand, disappeared from the Magic scene a couple years ago but has suddenly resurfaced for the World Championships here in Yokohama. He won Pro Tour-Nice in 2002 but it was the only Top 8 of his career. I asked him if he's been playing much recently and he responded, "Well, it's the first time in two years that I've played [in a big event], but I tested a lot for this tournament." When I asked if he was happy to be back he smiled, saying, "Yeah, definitely, I'm really glad to be here."

After Nitter's turn-one Savannah Lions traded with Kenji's Selesnya Guildmage, the players rebuilt with Umezawa's Jitte for Nitter and a Loxodon Hierarch for Kenji. Given that Nitter's land base consisted exclusively of red and white lands, it didn't look good for the European player. 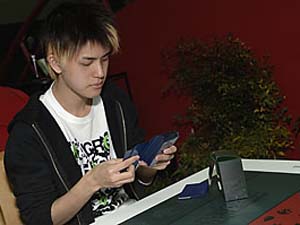 It didn't take long for Kenji to make a name for himself.

Nitter made a face as he realized how far he had to go with his opponent at 24. He tossed down two Shocks targeting the Hierarch and passed the turn. Kenji simply played a fifth land and Arashi, the Sky Asunder, while Nitter made Kami of Ancient Law and equipped it with Jitte.

Kenji attacked for five and passed the turn. This ended up costing him a little as Nitter played out a surprise Shivan Reef before attacking. When Kenji went for Seed Spark, Nitter had the Remand and the Jitte gained its counters. Nitter then added Savannah Lions and considered moving his equipment, but passed the turn with two mana up.

Seed Spark then dealt with the Jitte on Kenji's turn and Nitter gained four life in response. Kenji just passed the turn, knowing that time was on his side, especially with the Vitu-Ghazi, the City Tree he had just added to the board.

Nitter could only say go. Kenji resolved Pithing Needle on Kami of Ancient Law and then played Glare of Subdual, but Nitter had another Remand. However, when it resolved the next turn the game was all but over. Congregation at Dawn for two Loxodon Hierarchs and a Selesnya Guildmage sealed it.

Due to Kenji's shaky English, the players shuffled in silence, and both kept their hands for Game 2. Nitter led with Kami of Ancient Law and then snuck Ninja of the Deep Hours into play on his attack. He played a third land and passed.

Kenji calmly placed down Carven Caryatid and drew a card. Nitter frowned, but summoned Kami of Ancient Law and then Remanded Loxodon Hierarch. He untapped and played Isamaru, looking frustrated. "That wall is so big," he lamented.

Kenji tried Kodama of the North Tree next, but it ran into Mana Leak. Nitter attacked with his three creatures, losing the Ninja but dealing four to Kenji. He added Meloku, hoping to seal the game right there. However, Kenji Pithing Needle'd Meloku and replayed his Hierarch, climbing back to 18. Meloku cracked for 2.

Kenji's Hierarch attacked and went unblocked. A second one was Mana Leaked but unfortunately for Nitter, Kenji could pay because one of his two untapped lands was Selesnya Sanctuary. Both Hierarchs attacked on the next turn. Isamaru jumped in front of one of them and Shock finished it off. Meloku continued the trading of blows.

Congregation at Dawn then resolved, again for two Hierarchs and a Selesnya Guildmage. Nitter Charred the on-board Hierarch and fell to 8. He sighed, "This is so hopeless."

Kenji made a token with Vitu-Ghazi on end step, untapped and played Carven Caryatid and Selesnya Guildmage, then attacked with a Saproling, Llanowar Elves, and his Hierarch. Kami of Ancient Law jumped in front of the Elves and Kenji pumped with his Guildmage before damage. In response Nitter Charred the Hierarch and Shocked the Guildmage, but fell to 2 regardless due to pain from his lands.

When Kenji played out his last Hierarch, Nitter drew one last card and scooped, revealing at least one of his cards to be a redundant copy of Meloku.

After the match Nitter tried to figure out what he could have done differently. "Maybe I should have sided in Smashes. If I could have dealt with the Needle…

"I think I could have won that second game if I had a one drop…I had a Ninja and two counters. That wall though, it's so big. I had Chars and Shocks but I just couldn't do anything."

The team of Carven Caryatid and Loxodon Hierarch took down yet another burn-filled deck, and Kenji Tsumura moved on to 3-1.