Round 4: He Built My Deck

One couldn't be faulted for looking at the Round 4 feature match and wondering if it was actually 1999. Zvi Mowshowitz, Pro Tour champion and famous deck builder, was set to square off against Chris Pikula, himself a famous old school player who ran in some of the same playgroups as Mowshowitz.

"He built my deck," Chris pointed out as the two players sat down to their match.

Pikula opened on a Preordain, and the play was matched first by his opponent, then by Chris again on the second turn. The East Coast stars were frantically digging to the relevant portions of their combo decks: lots of red mana and a storm spell. After they had finished casting Preordains, both Pikula and Mowshowitz switched to Ponders, slowly building to the critical turn. 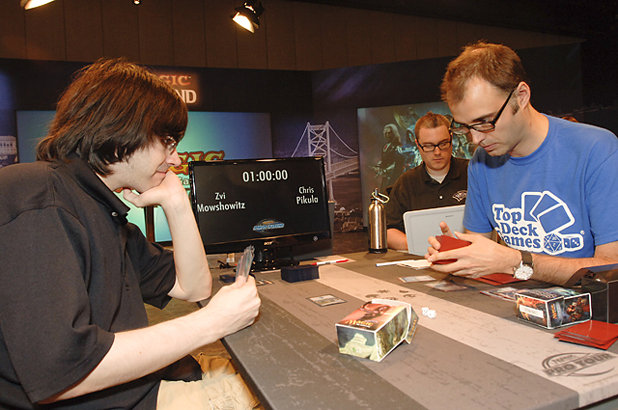 Zvi Mowshowitz and Chris Pikula are familiar with one another, and with the lights of the feature match arena.

Zvi cast a Gitaxian Probe to get a glimpse of his opponent's hand. Seeing no disruption, he said, "I have it," and revealed his own hand. It contained multiple Ritual effects to generate red mana, a Pyromancer's Swath, and a Grapeshot. It was more than enough to be lethal, and Mowshowitz had no fear his opponent could disrupt him thanks to the Probe.

"Yeah, you got me," Pikula replied with a frown.

"I could have tried to go for it," Chris explained as they sideboarded for the second game. "I would have only drawn one card, though." Not having enough steam, he had felt it was too risky to go for it, and the play had cost him. Could he have pulled it off? The world would never know.

The second game started off with bad news for Pikula, who had to take a mulligan and had no first-turn cantrip. His opponent didn't help matters, opening on Serum Visions to dig once again for the combo pieces in a race to see who would reach critical mass first. Down on cards, Chris cast a Gitaxian Probe to try to catch up, seeing his opponent had kept a one-land hand. "I'm on a four-outer," Zvi said with a smile. 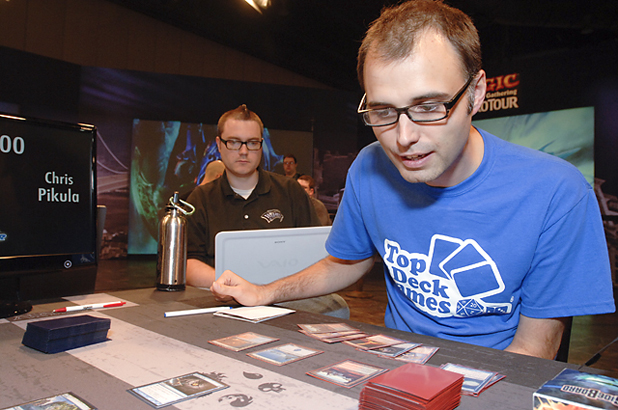 Zvi's mana-shy draw meant Chris had a chance. While Mowshowitz had to cast cantrips to try to find a second mana source, discarding when he failed to do so, and had eight cards in hand, Pikula was able to Rite of Flame a Pyromancer Ascension to the battlefield. The following turn he cast a second Rite, adding a counter to the Ascension, then a third copy of the sorcery!

"Wow," said Zvi, potentially about to lose on the lucky draw.

A Manamorphose drew Chris two cards and netted some additional mana after being copied by the Ascension, and a Ponder (plus copy) gave him even more. While Zvi teasingly chanted, "Fizzle, fizzle!" in the background, Chris went about the process of doing exactly the opposite.

Neither player gave any indication they were stressed out about playing one another, joking and chatting amicably in between the second and third games. Pikula, who had pledged to donate his winnings this weekend to a charity started by his friend and fellow East Coast Magic star Jon Finkel, started the final game of the match off on the draw. It was the first time in their games that Zvi would go first.

The pace of early cantrips stayed steady in the final game, Zvi opening on Preordain while his opponent cast Sleight of Hand. On the second turn Mowshowitz ran out a Manamorphose naked, using the mana filter simply to cantrip. The play was clever, and not the type that all players intuitively understand; rather than decide each piece of his combo deck had a specific role to play, Mowshowitz recognized that the deck had roles it needed filled, and the cards themselves were just the pieces available to fill them. Manamorphose could filter mana and double draw with a Pyromancer Ascension while going off, or it could help him stay in things if he didn't have any means of drawing in the early game; it wasn't simply one or the other.

Chris cast a surprise on his second turn: Kiln Fiend. The sideboard tech meant he could possibly go off on his third turn, but did his opponent have a means of dealing with the 1/2? Pikula risked it by beginning to go through the motions of comboing. Rite of Flame allowed him to cast Manamorphose and pumped the Fiend to 7/2. A Ponder made the Fiend 10/2, but Chris agonized over what to do with the top three cards of his deck. After shuffling them in, he drew a replacement copy of Ponder then went back into deep thought. With cantrips and Rituals in his hand alongside Grapeshot, it seemed certain the man behind Meddling Mage was going to finish going off. But to the surprise of everyone, he attacked with Kiln Fiend instead and passed the turn. 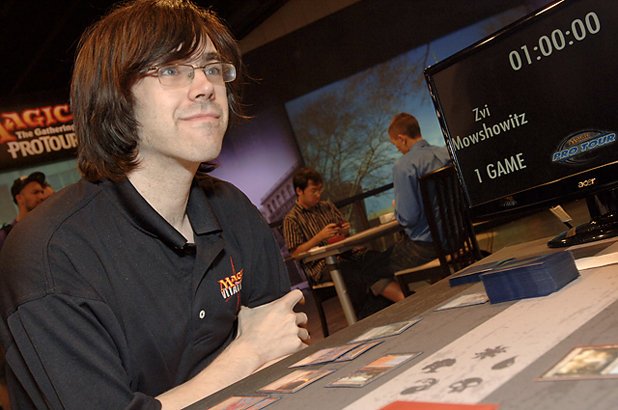 Zvi gives nothing away.

The swing left Zvi at just 9 life, but meant the Hall of Famer had a turn to try to come up with a plan. He played a land and passed, giving no indication whether he was able to do anything about the impending Fiend, and Pikula once again had the chance to go off. He cast Desperate Ritual and Seething Song, then a Pyromancer's Swath. He looked at his opponent to see if he could measure any reaction on Zvi's face, but the veteran pro gave no hints of what he was thinking. Revealing a Grapeshot, Pikula had Mowshowitz more than dead, even before attacking with the Kiln Fiend. Zvi nodded, then revealed his hand: a half dozen Rituals with no card draw or storm finishers.