Round 4: Hobby One vs. Dan Clegg Uncut

French team Hobby One formerly used to be Black Ops, a team with a strong history. Since then each of their members, the Ruel brothers and Florent Jeudon have notched up impressive individual results. There opponents, Dan Clegg Uncut, are one of those conglomerates that are more solid individual players than teams. Dutchmen Noah Boeken and former Masters winner Alex Witt teamed up with visiting American Brock Parker for this tournament. 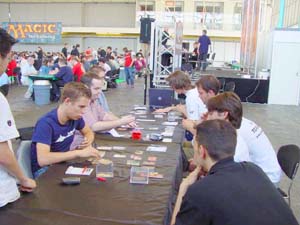 Witt ramped up to a turn 3 face up Snarling Undorak with a Wirewood Elf while Olivier summoned a Callous Oppressor. Pinpoint Avalanche brought down the Cephalid. Olivier replaced it with an Aphetto Runecaster and toughened it up with Improvised Armor. It was needed on defense as Witt started building up an army of beasts. A Treespring Lorian and Brontotherium marched menacingly onto his side.

The next turn Witt sent in the Brontotherium, provoking the armored Runecaster. Witt pumped his Brontotherium enough to keep it alive and smashed Ruel down to 6 life with the other beasts

Meanwhile Parker took a 1-0 lead in seat B helped with a turn two Lightning Rift.

It looked like Witt was about to go 1-0 up also as he dropped Alpha Status on the Brontotherium. Ruel held on through Choking Tethers, buying him enough time for an Aven Redeemer to get active and to get Dive Bomber and Mischievous Quanar on the table.

It was looking all bad for Hobby One as Jeudon went 1-0 down in his match against Boeken.

Witt had a lot of choices to make as he sent massive Brontotherium into a massive gangblock. Olivier managed to save his Redeemer by unmorphing a Raven Guild Initiate so the armored Runecaster traded with the enchanted Brontotherium.

Despite his low life (5) Olivier was hanging on, bringing back the Redeemer and summoning fresh recruits in a Daru Cavalier.

Witt summoned a Berserk Murlodont to keep up the pressure.

Antoine Ruel equalized in the center to go 1-1 in his match.

"One of your turns takes as long as one of their games," Olivier jokingly remarked to Witt.

Dive Bomber and Quanar went to the graveyard after taking down an Undorak as Olivier bolstered his board with a second Cavalier and mystery morph. He tried to take down the Murlodont with a another big gang block only for a second Pinpoint Avalanche to turn it into a one-sided massacre as a Redeemer vanished leaving both Cavaliers to be stomped by the angry Murlodont. Olivier went down to 1 life and clung on again as Wall of Hope bought a turn. No help was forthcoming from his deck as Witt went 1-0 up. 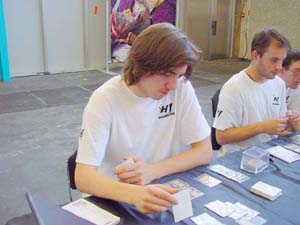 In the center Brock Parker beat Antoine Ruel 2-1 to give Dan Clegg Uncut a lead.

"I don't think you can deal with my 4 card sideboard," Olivier said before game 2. Two of the cards were Riptide Biologists and the third a Complicate.

Jeudon provided a glimmer of hope in his Game 2 as Mythic Proportions turned a Goblin Grappler into a savage monster.

Witt got an early Wirewood Elf which Olivier kept under control with a Sunstrike Legionnaire. A couple of Morphs traded and Witt could only attack with a second Elf as Olivier tried to delay the avalanche of fat Beasts.

Complicate stopped a Glowering Rogon from arriving and Olivier Ruel continued to summon monsters. Swooping Talon was enchanted with Improvised Armor to give the Dutchman nightmares. The game didn't continue long after that.

Jeudon leveled his match to leave the whole match open. 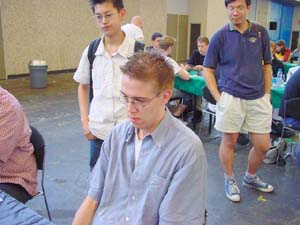 Olivier got caught out early in game 3 as he gambled running in a facedown Willbender against Witt's freshly summoned 3/3 Canopy Crawler. With 2 white and 2 blue open Olivier figured Witt couldn't afford to block. Unfortunately for him Witt made an excellent call, blocked it and sent the dangerous morph to graveyard for nothing.

From there the beats were pretty savage. Rogon (amplified once) joined the party and a facedown Towering Baloth. A Frontline Strategist kept Olivier in it when the giant Baloth flipped over but he couldn't drive the fat back. Alpha Status pumped up the Crawler even more and the game went to Witt.

Florent Jeudon won out in his deciding game but the overall match was already lost.