Belgian superstar Marijn Lybaert paused for a moment, looking quizzically at his opponent.

"Have we played before," Lybaert asked his opponent, Japanese powerhouse Shouta Yasooka.

"I think no," Yasooka responded after a thought.

Considering the level of these players, and the number of times each has played on the Pro Tour, that seemed an improbability. Both players have a bevy of Top 8s, with Yasooka having won the one Pro Tour he Top 8ed. Clearly, lack of experience was not going to be an issue here.

Yasooka was first on the board with a second-turn Ratchet Bomb. Lybaert had a plethora of ways to deal with the artifact in his hand, choosing to stash it away with a Leonin Relic-Warder. Yasooka tried to build his mana up with a Sphere of the Suns, but Lybaert blew it away with Divine Offering. Yasooka kept building with a Mycosynth Wellspring, which Lybaert would probably not be destroying any time soon. For his part, Lybaert kept attacking with his Relic-Warder, choosing to leave his pair of Inkmoth Nexuses at home. 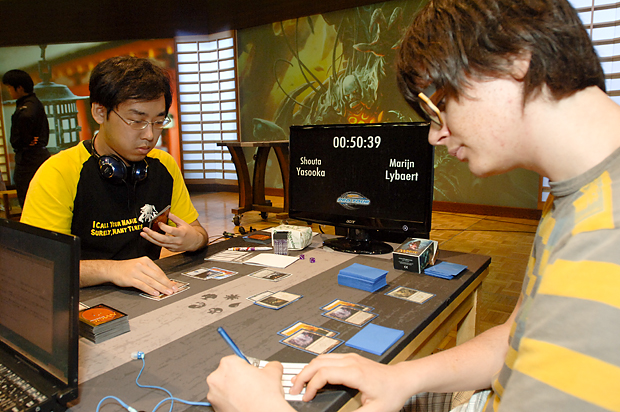 Shouta Yasooka and Marijn Lybaert face off, apparently for the first time.

Since Lybaert wasn't going to blow his Wellspring up or provide him with any juicy targets, Yasooka chose to play an Oxidda Scrapmelter, blowing up his own Wellspring for a land. Lybaert removed the Scrapmelter with a Dismember, prompting Yasooka to get rid of the Relic-Warder with Galvanic Blast. With the Ratchet Bomb now back on the battlefield, Lybaert killed it with Divine Offering before playing a Blade Splicer.

When Yasooka filled the sky with a Consecrated Sphinx, Lybaert felt it necessary to kill it with Phyrexian Rebirth, leaving him with a 3/3. Yasooka made another Wellspring, cleared the board with a Black Sun's Zenith, and passed the turn. Lybaert had nothing. Yasooka made the Wellspring look a little more dangerous with a Tezzeret, Agent of Bolas, but instead of animating it, he chose to dig with the planeswalker.

Lybaert knew he had to deal with Tezzeret soon, and cast White Sun's Zenith for three at the end of the turn. After untapping, he made a Pristine Talisman before activating his two Nexuses and sending his whole team at Tezzeret. When he swung on the next turn, Yasooka used a Beast Within to kill his own Wellspring, giving him a blocker and getting a land. After combat, Lybaert denied him a Sphere of the Suns with a Leonin Relic-Warder.

Once again, Yasooka found a Tezzeret, in addition to another Sphere. Lybaert animated his Nexuses, but chose to send them at Yasooka himself, sending just his three 2/2s at Tezzeret. Yasooka had another Beast Within to kill a Forest and get a second blocker, leaving Tezzeret with two loyalty and Lybaert down to one 2/2. With his newer Sphere returned, Yasooka animated his older Sphere and attacked with it and two beasts into Lybaert's depleted board. Lybaert tried to struggle for a couple more turns, removing the 5/5 Sphere with another Relic-Warder, but Yasooka made some more 3/3s and overran him with larger creatures.

Both players were playing interesting control decks for this field, heavy on the artifact removal, but clearly still with game against the other decks they may face. Yasooka's deck was particularly interesting, boasting a large amount of versatility with Beast Within, game-ending threats in Tezzeret and the Sphinx, and a way to make sure he never misses land drops in control matchups thanks to his Wellsprings. Lybaert's monowhite control deck ran a similar strategy, relying on a bevy of artifact removal to keep his opponent hampered while chipping away with efficient creatures like Blade Splicer and Hero of Bladehold.

Yasooka mulliganned in the second game, choosing to stick with six cards. Lybaert made a Blade Splicer on his third turn, right before Yasooka made a Trinket Mage to fetch a Horizon Spellbomb, again ensuring that he wouldn't fail to miss a land drop. Lybaert slowed his assault down, playing a Pristine Talisman on his next turn and swinging with his golem. Yasooka just kept playing lands and Mycosynth Wellsprings, thinning his deck and giving himself all the mana he could ever want. He used it to make a sixth-turn Consecrated Sphinx to fight the army of little cats that Lybaert had just made with a White Sun's Zenith. 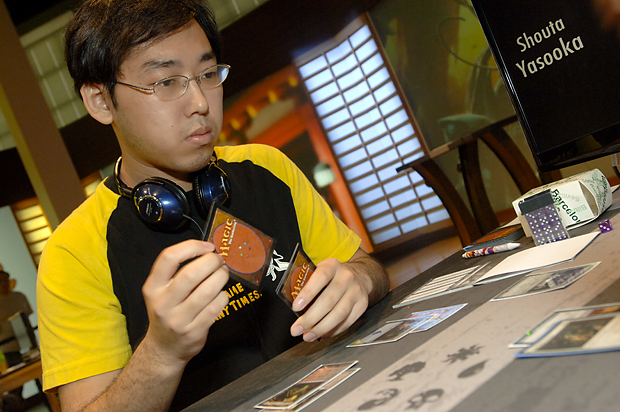 And then the game was over. Lybaert untapped, played his land, and dropped Elesh Norn, Grand Cenobite into play. Before he could even reach over to turn his creatures sideways, Yasooka had started to scoop up his cards rather than face the rampaging army of 4/4 kittens.

"Put that one on camera," Lybaert said triumphantly, turning to show me the pair of cards that had just won him the game.

Sadly, I didn't have a camera, so a thousand words will have to do.

For the final game, it was Lybaert's turn to mulligan. When he peeked at the top card, he sighed to himself, "That is why you never look." It was the second land he needed to make his hand reasonable. His six-card hand keepable, he started the game.

Yasooka led with a Gremlin Mine, ready to off anything Lybaert brought his way. Tezzeret, Agent of Bolas was next, coming on turn four after an uneventful start by Lybaert. All the Belgian had on the battlefield was three Plains. A fourth followed, and a Hero of Bladehold came down, providing a juicy target for Yasooka. Lybaert looked a little puzzled when Yasooka simply animated the Mine, played a Sphere, and passed the turn.

Lybaert tried to kill the Mine with Divine Offering, but Yasooka had a Stoic Rebuttal, tapping himself out. Now Lybaert had to think. He chose to pay 4 life to Dismember the blocker, smashing in with the Hero to kill Tezzeret and drop Yasooka to 16. He followed that up with a Hex Parasite and passed the turn. Yasooka made an Entomber Exarch, stripping Lybaert of a Plains in his hand and revealing the Hero of Bladehold he held in reserve. Lybaert sent the team. Yasooka blocked the Parasite, and the remainder of Lybaert's team dropped him to 5. Unafraid of having his board cleared, Lybaert played the second Hero, attempting to cement the win. Apparently it was good enough, as Yasooka simply scooped up his cards.

3 Sphere of the Suns 4 Pristine Talisman