Round 4: Itaru Ishida vs. Gary Wise

Wise was terrified of this pairing, because of the Japanese's history of bringing eccentric decks to the table. Ishida didn't disappoint, playing a deck designed by famed Japanese deckbuilder Akira Asahara, a version of which was played by Katsuhiro Mori at the Australian Open this year.

Wise mulliganed in the first game. He started the early beats with Nimble Mongoose and a pair of Werebears, but he was giving Ishida a lot of time. Pernicious Deed killed his board. He rallied with Nimble Mongoose, Basking Rootwalla and then Standstill. Ishida responded with Fact or Fiction, and then that thing all the invitationalists fear happened. 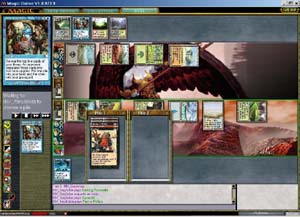 (click to open full-size in a new window)He presented the mythical 5-0 split. Ishida was quick to make the right decision. Burning Wish for Pyroclasm left Wise with five cards in hand, to Ishida's seven and twelve life. Another Mongoose brought Ishida to nine, and then the Grizzly Fate he Wished for got ready to dominate the game. Wise spilled a hand of Wonder and Werebear on the table. Ishida Duressed him and saw he had nothing.

How lucky then of Gary Wise, to topdeck Centaur Garden the second and come overtop for the win. Ishida couldn't believe it, but rather than explode, he permitted himself only his trademark pout.

Wise's draw for the second game was somewhat lackluster. Despite following up Rootwalla with a Disrupt for a turn-two Prohibit of a Nimble Mongoose, he was forced to play out Standstill with just one point of pressure on the board.

The extra time let Ishida fight through an incredible land-glut, and eventually he had all the tools. He cracked Standstill with Fact or Fiction at end of turn, then Duressed Wise's Circular Logic and Persecuted all his green monsters. Grizzly Fate followed, and after it was flashed back Wise packed it up. 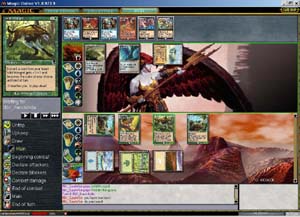 Wise started off the deciding game with an unexciting Careful Study, and then watched as his Mongrel was Smothered. His only rejoinder was Nimble Mongoose. Ishida hit him with Duress, forcing out Disrupt, and Wise ripped like a pro, serving himself a Careful Study that got him Basking Rootwalla and Nimble Mongoose. Combined with the Mongrel he'd just drawn, that made some serious beatdown.

Fortunately, Ishida's clumsy mana was slowing him down. He missed a land drop, and all he had was a Chainer's Edict to shut down a Rootwalla. A Smother on the following turn kept him at , and then it was over.