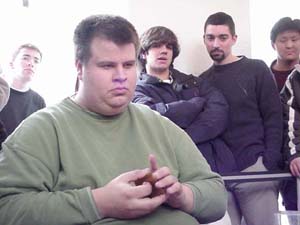 On one side a Pro Tour champion: the massive Marco Blume was a part of Phoenix Foundation (Budde, Blume, Baberowski) in Pro Tour New York. Across the red zone mat is a player that is known for Extended: Jelger Wiegersma made the Top 8 in Pro Tour New Orleans.

Marco: "You shouldn't be scared of me. You're the good player on this table. You have Pro Tour Top 8 and all that. I won a Pro Tour but I was on Kai's team. That is a lot easier."

All we got to see of the deck for the first few turns was land. Blue, green and white (the last one only on Marco's side). The makings of a long game. On turn four Blume tried a Fact Or Fiction but Wiegersma had the counter. The next play again belonged to him when he Impulsed into four lands.

Jelger used a Gaea's Blessing to recur the Counterspell and hunt for options. But the huge German was tired of sitting idly: he had two Treetops to the Dutch's one so he started attacking.

On the second swing Jelger tried to trade Villages but Blume Sworded the would-be blocker away. On the next turn both Villages attacked and Wiegersma knocked on his deck. He didn't get a straight answer and took another swing down to five.

He played a Fact or Fiction turning up the following:

He took the second one and played a Morphling. A Forbid joined the stack but a Counterspell made sure the big monster stayed into play.

The blue menace forced the Treetops to stay away from the red zone and with five cards in Jelger's hand Blume knew he had to think out his next play quite carefully.

He played a Fact or Fiction netting the following:

He took the Counterspells and tried to drop an Oath. A Counterspell, Thwart and two Force of Wills later Jelger said "Ok." And just like that the Oath resolved. The table had once again changed.

The Morphling took its first bite and Jelger dropped a Powder Keg, killing his own Morphling to nullify the Oath. A single Treetop attacked and Jelger Kegged it away.

The German used two Blessings to put two Impulses, two Fact Or Fictions and the Treetop back into the deck. On the last possible turn Jelger Impulsed into Powder Keg after countering a Powder Keg.

He tried to play the Powder Keg and they had another fight. Or they would have had if Jelger hadn't given up as soon as Blume showed him a Counterspell.

Marco: "I have no idea of what you are playing."
Jelger: "That is pretty good."
Marco: "But I do know Treetops are really good against you. That much I know."
Jelger: "Yes, they are!"

With still thirty-two minutes on the clock they got the second game underway. Early on, they mostly showed their card drawing spells with Accumulated Knowledge, Impulse and Brainstorm. Blume used a Wasteland to cut Jelger's Green mana. Jelger even went for the "Intuition for Accumulated Knowledge" trick.

Marco: "Am I going to see your deck? Oh, I know that trick."

Finally Wiegersma went for Back to Basics and was amazed to see Blume let it resolve without a fight. The German was now unable to untap all of his lands, although he still had four untapped.

When Jelger went for his second Fact Or Fiction Blume blew up the Basics. When Jelger let it resolve Blume reacted "Don't say ok. That sucks!" The Fact resolved in the following piles: 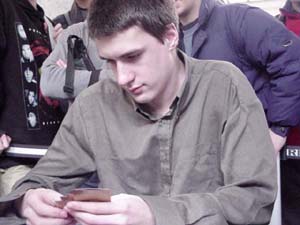 The Dutch had another Basics and he wasn't afraid to play it. An Impulse didn't give Blume any answers so he let it resolve. A second Basics all but locked the game away.

Another Fact gave Jelger four lands and the game was speeding towards the end all full throttle.

Blume: "Back to Basics is mean!"

It sure was keeping him from putting up a fight. He stood there waiting for Jelger to find a way do finish the game, trying to get further knowledge about the Dutch's deck.

Finally the Dutch decided it was time to get two Roar of Wurm tokens into play. Blume tried to Keg them away and they got into a counter war. Jelger won. Blume went for the Oath. Jelger countered. Blume reached up and got ready to adjust the scoreboard.

A few sideboard touches later they were ready for the third and decisive game. Jelger drew a no-land hand and mulliganed. Again they started of with the usual mana fixing, card drawing nonsense.

Blume Disrupted Jelger's second turn Impulse to start the hostilities and Jelger took the window of opportunity to drop a Powder Keg. Jelger returned the favor by countering a Fact or Fiction but the German couldn't take advantage of that.

A second attempt to Fact or Fiction resolved.

He took the Counterspells and shuffled his graveyard into the library (thanks to the Blessing). A few turns later Jelger went for the throat and his Basics resolved. Then Blume got rid of them with Aura Blast right away.

The German was now apparently on full control of the game. He played a Spike Weaver and Jelger used the Oath to shuffle back his graveyard into the deck. The German finally got to see the whole deck (along with the whole crowd).

Time ran out and after a few jokes they slowed down their pace. They now had all the time in the world to figure out if any of them could win in the five extra turns. Blume Wastelanded away a Treetop and now had a Weaver and two Treetops. Jelger's defense was a simple Keg with zero counters.

He Intuitioned for a Roar and took a hit from the Weaver. Blume then dropped the just drawn (from a Fact or Fiction) Morphling. Jelger made a token and passed the turn with the Morphling getting two Weaver counters.

With the Morphling now being able to deal nine (ten after he got the last Weaver counter) points of damage it seemed Blume had a way to still pull the game.
The huge Morphling flew in for eight damage bringing the Dutch down to nine.
Blume: "You should play a good card now."
Jelger (dropping a Back to Basics): "Is this good enough?"
Marco: "That will never make it into play."
Jelger: "You never know."

Several counters later it turns out Marco was right and the Dutch extended his hand with a smile. The huge Morphling didn't need to deal the final blow.

Marco: "It was a great match and you were a great sport. I mean that. You could have stalled the last game."