Round 4: Jens Thoren vs. Anton Jonsson 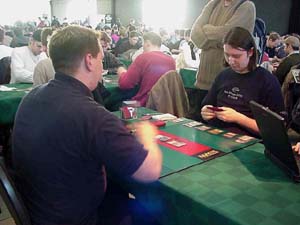 Jens Thoren vs. Anton Jonsson Round 4 is when the big players come into the fray and sometimes lady luck pits team-mates against each other. Jens Thoren and Anton Jonsson are two Swedes who've had a lot of success recently and both are members of the Scandinavian team, Punisher. Thoren came second in Pro Tour-San Diego and Jonsson made top 8 in Pro Tour-New Orleans.

In game 1 Thoren went first and summoned a Cephalid Looter. As Jonsson had only plains and forests and then laid an island in his turn it was obvious this creature would be very important in this matchup.

A marauding Crypt Creeper got squashed by an Elephant Ambush only for the Elephant token to be despatched permanently by a Faceless Butcher.

A hasty Centaur Chieftain charged into the red zone from Jonsson's side but a Peek revealed his hand held just a Mystic Zealot, Scrivener and a lot of land. Thoren traded an Organ Grinder for the Chieftain and then used a Crippling Fatigue to remove the Zealot after Jonsson used it to block an attack from the Butcher.

Both decks traded blows as Syncopate prevented a Dreamwinder from arriving and came back for more with a Scrivener. Thoren was able to nab the Gorilla Titan Jonsson had just drawn with a Mesmeric Fiend though. 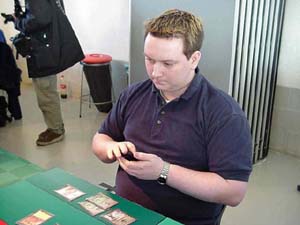 Jens Thoren Then Jonsson peeled a bomb in the form of Major Teroh. This wiped the black Creatures off the board and when Thoren tried to save the Butcher with an Aether Burst Jonsson used the Syncopate again.

Thoren was left with just a Looter and commenced beats. Jonsson dropped a couple of fliers that didn't stay around for long as he had to trade one for a Looter and another fell victim to Morbid Hunger. The Gorilla Titan finally entered the stage and exited just as quickly to Chainer's Edict.

A Gravedigger seemed a good card to draw at this point for Thoren as this got back the Organ Grinder and with a stuffed graveyard to feed it the end was not long in coming for Jonsson.

Jonsson was able to get good mana acceleration over Thoren in game 2 by going first and digging out a land with deep Reconnaisance. His only aggression was a Balshan Collaborator though, normally a bomb but not so exciting with no swamps. Thoren had a Skywing Aven to hold that off and then dropped the ever-useful Cephalid Looter.

Thoren was still getting good card quality by pitching excess lands to the Looter. A Faceless Butcher drew the Sycopate but Thoren had a Zombie Assassin to follow it with. A Whispering Shade with five swamps in play looked particularly menacing on Thoren's side. 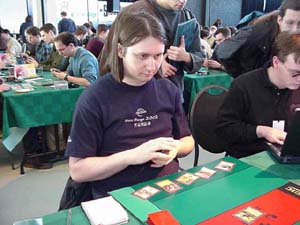 Anton JonssonJonsson tried to reverse the tempo by pitching his hand to a Turbulent Dreams, simultaneously giving himself threshold for his Mystic Zealot. This was only temporary as the Zealot was assassinated and the Aven and Shade soon returned to play.

Jonsson tried to race, pumping his Collaborator with a Nantuko Disciple, but a Crippling Fatigue quickly ended that plan and put Thoren back in the driving seat. Jonsson's deck was out of steam now and when Thoren removed his last creature with a Chainer's Edict he had nothing left to stop a rampaging Whispering Shade.