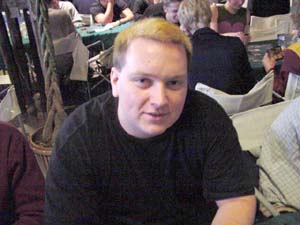 Victor and Jens both had three byes today, so this was the first round they actually had to work for their points. Vic had been complaining about his deck all day and facing someone like Jens in round 4 is not the best start of your day.

Vic ramped up with an Elvish Pioneers on tun 1. Jens just played an Island, signalling blue, the color frowned upon by most pro's as the worst color in the block for limited play. Vic kept up with the Elf theme and played an Everglade Courier. He couldn't find a beatdown creature to complement his fast draw so he just settled for a Wall of Mulch.

When Jens announced "Cycle this" on turn three things seemed to be going well for Victor. The cycled card was a Slice and Dice though and it destroyed both Vic's attacking creatures. An Undorak replaced his fallen comrades only to be killed by a Solar Blast from Jens. Vic cycled a Swat to look for more creatures but didn't find any and had to end the turn without playing a creature. Jens, after creating some breathing room by destroying all of Victor's creatures, started taking control of the game with not one but two Ascending Avens and a Mistform Shrieker.

Krosan Tusker was too little too late as a Solar Blast finished Victor off the turn before the Beast could come in for lethal damage.

Victor decided to play again hoping for another fast start. Both players mulliganed their opening hand but the six-card hands were fine and the game got underway. The mulligan didn't seem to hurt Vic much as he accelerated into a turn 3 Symbiotic Elf with a turn 2 Wirewood Elf and followed that up with a Mistform Shrieker. Jens had a slow start and his first play was a Solar Blast that took care of the flier. A turn passed without anything being added to the board.

Jens, slowly but surely dying to the little beaters, finally played his first creature, a Mistform Shrieker of his own; but it was killed by Cruel Revival before it could actually do anything. The next turn, Victor emptied his hand playing a land and a Treespring Lorian. He had to play from the top of his deck from this point onward but his board position seemed fine so it wasn't as bad as it sounds. Pinpoint Avalanche took care of the fat creature but the Elves kept up the pressure and a topdecked Nantuko Husk definitely did not improve Jens' situation, threatening to deal lots of damage in combination with the Symbiotic Elf.

Another turn, another topdeck as Vic ripped Slipstream Eel off the top. The 6/6 seemed to spell doom for Jens but he stole it with a Blatant Thievery the turn after. The Slipstream Eel very effectively shut down Vic's offense with the help of two rather suboptimal morph creatures. A Battering Craghorn further improved Jens' position and after some trade offs the Eel and the Husk are the only creatures left on the table. Three attacks from the Eel and a Shock later Jens took his first real match today and Victor was left with the unappealing situation of having to win out for day 2.