Round 4: Jin Okamoto vs. Zvi Mowshowitz 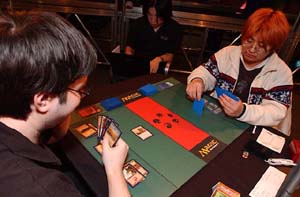 For those who follow the Pro Tour, the competitors in this matchup need no introduction. Jin Okamoto is one of the most accomplished and respected players from Japan, and Zvi Mowshowitz is well known for his original, sometimes unconventional decks. In fact, he's coming off a Grand Prix victory two weeks ago with his often-mocked signature deck- Turbo Land. Both players came to the Feature Match table at 2-1, and are looking for a win to be in prime position for day two advancement in a 3-1 draft pod.

Okamoto opened with Imagecrafter, and played a third turn morph creature, which was Shocked on end step (the creature was Nameless One). Mowshowitz untapped, and played his own morph creature. Okamoto answered back with Mistform Wall. Mowshowitz build up his side a little more with Goblin Sledder, and attacked with his morph creature on the following turn. The wall blocked, and morph was paid to reveal Daru Lancer; Goblin Sledder pitched in to break the wall down. Okamoto untapped, and summoned Ixidor, Reality Sculptor. Crown of Fury made the Lancer a 4/4 first striking machine, and Daru Cavalier fetched another to add to Mowshowitz's first strike army. Essence Fracture bounced both creatures back, providing Okamoto with some serious tempo advantage. This cleared the way for a successful attack. 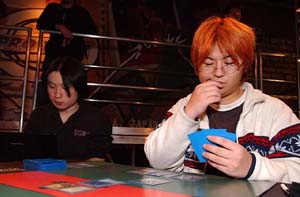 Mowshowitz came right back out with Avarax, and pumped it to deal four damage. Okamoto untapped, used Imagecrafter to make Avarax a Wizard, and killed it with Fever Charm. A morph creature followed, and was tapped down by Okamoto's Choking Tethers, clearing the way for yet another attack. Okamoto summoned Clone and copied Mowshowitz's morph creature, and both players were confused about what would happen. Okamoto seemed to expect Clone to get the +1/+1 bonus from Ixidor, but Mark Rosewater confirmed that Clone was simply a 2/2 vanilla, face-up creature. On end step, Mowshowitz morphed his Daru Lancer, attacked, and summoned two Cavaliers in a row. It didn't matter, as Okamoto had a second Choking Tethers to tap down Mowshowitz's blockers and attack for the win. 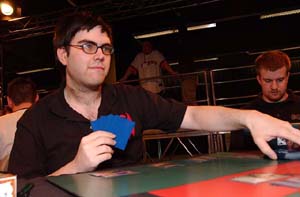 Mowshowitz started with Goblin Sledder, and Okamoto had his own one-drop in Imagecrafter. The Sledder attacked offering a trade, and Okamoto obliged. Each player summoned a morph creature, and both traded in combat once again to keep parity rolling. Okamoto had another morph creature, Mowshowitz cycled Renewed Faith, played a fifth land, and ended his turn. Ixidor made Okamoto's creature a 3/3, Mowshowitz played a sixth land, and cast Grassland Crusader. Okamoto's team attacked, the Crusader blocked Ixidor, and Fever Charm made the Legend mighty enough to make the 2/4 blocker fall. Mowshowitz answered back with two morph creatures. After some thought, Okamoto did not turn either creature face up.