Round 4: John Larkin vs. Franck Canu 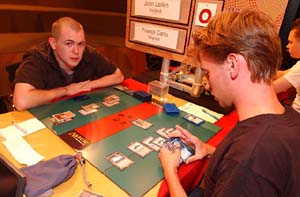 John Larkin is a fixture at the World Championships, having won Irish nationals on three separate occasions, including this year. Franck Canu hasn't been around quite as long, but he has established himself as a major player on the Pro Tour this season. His country – France – has had a great season and he's been a big part of that.

The matchup was Psychatog versus Psychatog, with both players eschewing the third color that most 'Tog decks have added. Some Tog decks have followed the example of Antoine Ruel, who added green for Pernicious Deed and used that build to great effect on the Grand Prix circuit. Others have followed Kai Budde's lead, who added red for Burning Wish and put up 6 wins against just 1 loss at Euros. (Budde himself stuck to his guns this weekend, running essentially that same 'Tog build even though his mini-Colony teammates went with Red Zone 2k2.)

Even though both these 'Tog players were black-blue, this was still not quite a mirror match. Canu loaded his deck with cheap cantrips (like Peek and Predict) so he could dig through it faster and build a big graveyard quicker. Larkin, on the other hand, went for a slow but theoretically more stable build with Nightscape Familiar, Undermine and Chainer's Edict.

Canu's opening hand had just one land so he looked over at Larkin and asked him "is your hand good?" Larkin, with his hand fanned out right in front of his face, didn't give anything away, calmly claiming "I haven't looked yet." Canu decided to keep, played his one Island, and then played Peek during Larkin's first end step. 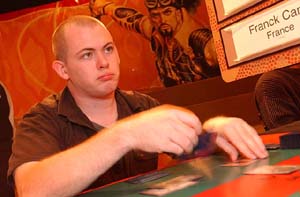 Larkin wasn't sure precisely what was up. He didn't know what kind of deck Canu was playing yet and he thought he'd look kind of foolish if he used his Force Spike to counter a Peek only to have Canu untap and drop Merfolk Looter on him. "Crazy Frenchman," Larkin explained after the game, "You never know what they're going to be playing." So Larkin let the Peek resolve. Canu not only got to draw land from the cantrip effect, but he also knew to play around that Force Spike for the rest of the game. Larkin also chose not to Spike a turn 2 Predict and that was all the opening Canu needed. Now he had the land he needed to bait out all Larkin's counters, counter Larkin's Fact or Fictions, and then force out a Psychatog. Larkin was still holding that Force Spike when he died.

Canu's decision to play with Peek looked good again in game 2. The information he gained allowed him to know when to leave mana untapped for permission and when he could afford to go for it. The crucial turn came when Larkin played out a second Nightscape Familiar. Canu played Circular Logic, knowing Larkin had the three mana he needed to pay for it, but Canu just wanted Larkin to tap out. Larkin paid and that let Canu get a Psychatog into play. Getting down the 'Tog was crucial because Canu had three more copies of Circular Logic in his hand and they're a lot better when they only cost 1 mana. With 'Tog in play Canu was able to counter Fact or Fiction, Undermine, and Fact or Fiction all without getting an untap step in between. Larkin was then out of gas and Canu got to untap and resolve a Fact or Fiction. Canu's hand at this point was Fact or Fiction and Psychatog and he knew he had the game almost wrapped up. 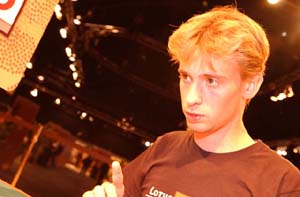 Larkin untapped and drew Upheaval. With his finger in the air celebrating his draw step, all Canu could do was shake his head and mutter "You're so lucky ..." Larkin didn't have the 'Tog he needed to completely ice the game, but starting out with a Nightscape Familiar and a land after your opponent picks up all their permanents is still quite a powerful play. It took a while for Larkin to deal 20 with his pair of Familiars, but that's exactly what he was able to do.

Canu used Engineered Plague to great effect in game 3. After Duressing Cunning Wish out of Larkin's hand and seeing no permission, but two Familiars in addition to the one that was in play, Canu slammed his Plague down, announcing "zombies" with great pleasure. With time ticking down in the round, Canu sped up his pace of play dramatically. He picked up a warning when he accidentally flipped over 6 cards with Fact or Fiction, but the only real issue left was whether he could win in time. Larkin's draw was poor anyway and getting a 3-for-1 off the Plague added insult to injury. Larkin used Cunning Wish to fetch Mana Short, which forced through a Chainer's Edict and deprived Canu of his victory condition. Fact or Fiction delivered up two more, and it was all over but the math.