Round 4: John Larkin vs. Tony Dobson 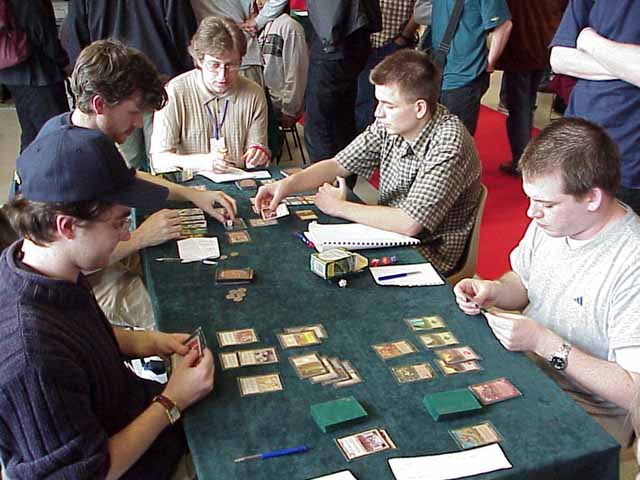 John Larkin and Tony Dobson met in a crucial round 4 match. Both players have a Top 8 on Tour this season and both are core members of the European Alliance. Larkin is the reigning Irish national champion while Dobson is considered by many to be the top English player. Since both players came in with 2-1 records, this match determined who would be in good shape for tomorrow and who would have their back to the wall.

Dobson, playing a black/white deck, played a pair of early Pious Warriors to hold off Larkin's red/green beats. Interestingly, Dobson then started attacking with the Warriors and dropped a Defender en-Vec to help him build momentum. Larkin was forced to leave his Laccolith grunt back on defense, but even with Deepwood Drummer on his side the Defender made it really hard for him to block effectively. Dobson added Nakaya Shade to his army and then Diving Griffin while he continued to serve with the Defender and those Pious Warriors every turn.

All Larkin could do was complain "You aren't supposed to beat somebody down with Pious Warriors." He's right, Dobson's strategy was quite unconventional. However, it was also quite effective. Larkin couldn't stabilize the ground until the Defender faded away and by then he was at 2 where the Griffin could easily deliver the fatal blow.

Larkin had an amazing start in game 2: turn 2 Vine Trellis and turn 3 Darba. Unfortunately for him, Dobson had the answer in the form of Topple. Larkin followed up with Grunt and Deepwood Drummer, but Dobson played Diving Griffin and then showed off some amazing sideboard tech: Inviolability on the "does not tap to attack" Griffin. The Griffin attacked every turn and still served as an amazing blocker.

Larkin did draw and play Ancient Hydra, but Dobson used Muzzle to shut it down. Both players spent a while agonizing over the interaction of Muzzle and Ancient Hydra and neither one was sure if there was any way Larkin could sneak some damage out of it somehow, despite the Muzzle. Larkin received a lesson on upkeep timing and the stack from a judge and then the Hydra died. (Larkin wanted to activate the Hydra before putting the Hydra's fading on the stack so the Hydra would die and Muzzle would go to the graveyard before the Hydra activations resolved. However, there's no way to get anything "lower" on the stack that something that triggers at the beginning of upkeep (except another upkeep trigger). If Larkin had another card that would allow him to kill the Hydra as a response to using it, then he could have dealt some damage.)

All this was really just an academic exercise because Larkin had no answer for Inviolability. Dobson eventually added Misshapen Fiend to his attack and killed Larkin over the course of 8 attack phases.