Round 4: John Ormerod vs. Carlos Barrado 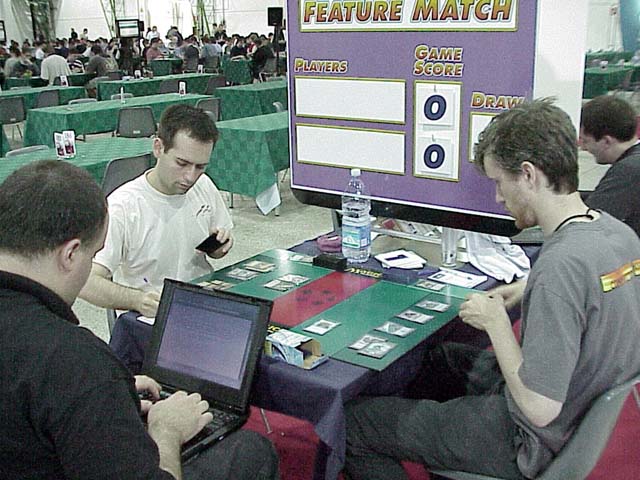 Pro Tour Mainz top 8 finisher John Ormerod, member of England's holy trinity, squared off with Grand Prix Madrid winner Carlos Barrado in a match to see which player would advance to the 4-0 bracket.

Game 1 started with JohnO stalling at two lands before playing a third Island on turn four. Fortunately for the Englishman, his opponent was playing a non-aggressive blue-white deck, meaning that he didn't fall too far behind. John used his three mana to cast a Static Orb which was countered before Carlos untapped and cast Story Circle, naming blue.

John then cast a preventative measure to the circle, bringing the disguised Urza, otherwise known as Blind Seer, into play. The Seer started making itself white so that it could attack, dealing three points of damage a turn. At the end of the second turn in which this was going on, Carlos cast Fact or Fiction, countering John's Counterspell before casting Wrath of God, killing the Seer before John cast a Thieving Magpie on his next turn.

For the next few turns, John would attack with the Magpie only to have it Story Circled. He eventually cast Glacial wall, presumably to get an extra body on the table for Opposition as Barrado continued to cast Opt and Accumulated Knowledge.

Finally, JohnO was ready to act. Casting Opposition to go to seven cards in hand, the Englishman cast two counterspells in response to Carlos' Dismantling Bow and follow up Absorb. Carlos then cast Wrath of God, clearing the table, but John had been waiting, casting Glacial Wall and Spiketail Hatchling in an attempt to begin his Opposition lock.

Unfortunately, Carlos had his third Wrath of God, forcing the Englishman to start over, casting Merfolk Looter, which was Absorbed before casting two Thieving Magpies. For a couple of turns, the Magpies tapped Coastal Towers before Carlos started a counter war with an Accumulated Knowledge for three cards, which was eventually countered, leading to John's casting Static Orb, which was promptly Dismantled.

Two upkeeps later, Carlos tried once again. Casting a four point Accumulated Knowledge, the size of the Spaniard's deck started becoming an issue. Fortunately for him, he drew into a Millstone and a Counter, both of which were cast during his main phase. On the next turn, Barrado cast a second Millstone before John cast Merfolk Looter. Unfortunately, with Ormerod being milled for four cards every turn and a third Millstone hitting the table soon thereafter, it didn't matter, and twenty minutes into the round, he conceded.

With all manner of anti-blue sideboard tech having been inserted into both decks, the game started quickly enough, with Ormerod Porting Barrado's first land before casting Merfolk Looter. With no third land, John immediately started looting on turn three, casting a second, which was Absorbed. Playing a third land on turn five (after Carlos had also failed to play a fourth land) John could only sit on his Port, looting after Carlos played a Coastal Tower, which he found with Accumulated Knowledge, then playing Static Orb, which was Absorbed, taking Carlos to 26. John next cast Thieving Magpie, which Carlos countered, signaling no Wraths in his hand, and after Carlos Gainsayed John's Thwart, John cast Foil, allowing the bird to resolve.

That's when the Magpie went to town. After Carlos Fact or Fictioned into four lands (which he took instead of Absorb) John started getting his Islands back in play as fast as possible. To find out how bad the Magpie was for him, all one had to do was look at Carlos' face. Once it attacked, then again, combining with the Looter to ensure that the card advantage John was getting was of a high quality. 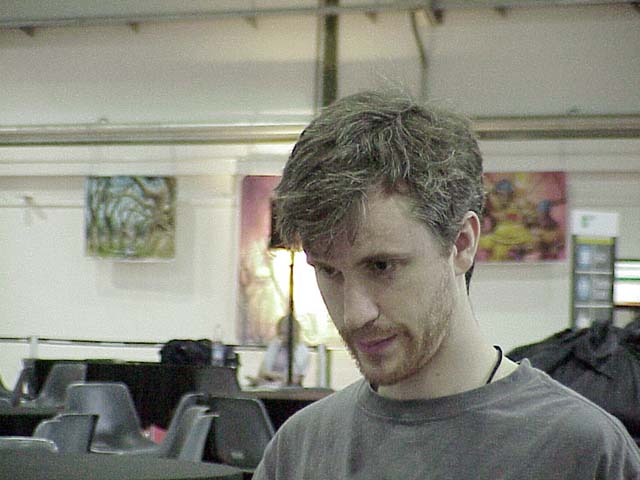 Try as he might, Carlos couldn't find a Wrath or a sideboarded Rout, and after John had drawn six extra cards, it appeared the game was all but over, but the Spaniard wasn't going down without a fight. With Ormerod Looting and Milling, his deck was down to 29 cards, and Carlos played a Millstone, which could have turned into a serious threat. The two went to war, casting counterspell, Gainsay, Gainsay and Absorb before the stone resolved, but with the quality of cards in John's hand, it didn't seem to matter all that much. Ormerod cast Blind Seer, resulting in a Counterspell, Counterspell, Counterspell stack that countered it, and then cast Spiketail Hatchling, which he drew off the Magpie. The Hatchling was Foiled.

At this point, the Magpies insistence on drawing was becoming a major issue for John. Needing to continue his offence, he had no choice but to keep attacking with it, but it got him closer to deck death with each attack. John's next turn saw him cast two Spiketail Hatchlings, the first of which was Foiled, and the turn after that saw him triumphantly cast a fat Blind Seer with a sigh of relief. With John's next attack taking Carlos to five, the Spaniard was forced to Dismantle his Millstone with kicker, and when his Accumulated Knowledge was Gainsayed and his Rout Countered, he knew it was time to sideboard for game three.

Game 3 started with John saying "I have no Blind Seer, so I'll mulligan." John cast a second turn Spiketail Hatchling followed by a third turn Merfolk Looker, which was Gainsayed. On his turn three, John failed to play a land, and on turn four, when he cast Sleight of Hand, it was Counterspelled, likely only because there were less than nine minutes left in the round.

With both players playing very quickly, the Hatchling continued to make a dent, hitting for one point a turn as John's spells namely a Static Orb, were countered. With John tapped out, Carlos cast a new route to victory: the 5/6 Mahamoti Djinn, but this allowed John to cast Temporal Adept. With the Hatchling taking Carlos to 14, John played his fourth and fifth lands, with the Adept returning the Djinn to Carlos' hand. This meant that Carlos could cast Wrath of God, and after John Thwarted manually, Carlos cast a second, which was Thwarted with the alternate casting cost.

After a two card Accumulated Knowledge, Carlos could do nothing but cast the Djinn again, which John returned to his hand, attacking for four. Again the Djinn came into play and again it was bounced as John's creatures reduced Carlos to four life. Carlos played a 10th land, cast his Djinn and attempted to Absorb it, and when John Thwarted, Carlos conceded.