Round 4: Jun-Wei Hew vs. Tsuyoshi Fujita

After waiting through three rounds of byes and with many eyes on him, Jun-Wei Hew was finally going to get a chance to play his unusual deck. He was running Dark Desire—a Black-Green Mind's Desire deck with an odd array of cards including Cabal Ritual and Infernal Harvest—and spectators were eager to see if he could make the deck work under actual tournament conditions.

He faced off against a formidable opponent in Tsuyoshi Fujita. Fujita was running a Goblin deck with a Japanese twist—black for Patriarch's Bidding. As an added bonus, he was also running four copies of the Goblin Matron to fetch Siege Gang Commander, Gempalm Incinerator, or any number of other goblins.

Hew did not want to see such an accomplished opponent for his first round of actual play, "Watch me bomb out here and I'll be helping you with coverage tomorrow."

Fujita was on the draw but could not keep his opening hand—although his next six were suitable. He came out pretty fast with a Goblin Sledder and followed it with Goblin Piledriver. Fujita watched as his opponent used Tainted Pact to flip past two lands to find a Rampant Growth. Fujita had seen Hew's deck in action last night and knew what he was in for.

Despite knowing about the deck, Hew was still able to raise an eyebrow when he used Cabal Ritual to power out a turn three Explosive Vegetation. "Never thought you would see this in a Grand Prix, did you?"

Hew quickly fell to fourteen and the Piledriver was joined by another Sledder. Hew continued to develop his mana with the Rampant Growth form earlier and when Fujita played a Goblin Warchief he would have been dead if not for Moment's Peace. He flashed it back on the next turn and when he cast Diabolic Tutor it was for another Moment's Peace.

When Fujita played a Siege-Gang Commander, Hew bought a turn with a flashed back Peace but with that spell removed from the game he had to win immediately. Infernal Contract would also not be helpful as he was at thirteen and Fujita could activate his Commander three times.

Hew cast another Explosive Vegetation and an Early Harvest. He Tutored for another Harvest and cast that as well—with two blue floating. He cast Mind's Desire with four spells cast already that turn, "I feel lucky..." His first card revealed was a useless Infernal Harvest but his next two were Mind's Desire and Early Harvest. Fujita conceded as soon as he saw the second Desire.

Hew - "Now you bring in Flaring Pain and I lose!"

Both players mulliganed and Fujita seriously considered going down to five with only a pair of Skirk Prospectors in his next six cards but he decided to give it a whirl. Hew also kept a six card hand.

Fujita did not exert much pressure but by the time Hew cast Explosive Vegetation on turn four he was at eleven thanks to the two Prospectors and a Firebolt. Fujita 'reinforced' with a Sparksmith and whittled Hew down to four. Hew had a turn that he could have cast Early Harvest twice and a tendrils of Despair. He could then have Spelljacked the original Tendrils and cast it again to put himself out of kill range but he chose to go to one instead and Fujita had another Firebolt. 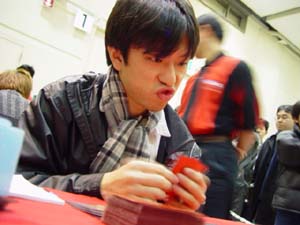 Jun kept his opening hand but Tsuyoshi double mulliganed. It was Tsuyoshi's third and fourth mulligan of the match. "I feel bad," said an obviously lying Hew.

With no creatures to fear, Fujita opened with Mountain and Firebolt. He followed up with a Piledriver and during his EOT, Hew cast Tainted Pact. Not wanting to remove an Early Harvest from the game he stopped on it rather than continue in search of his much needed third land.

Land eluded him for the next few turns and Fujita's deck delivered the goods. A prospector on turn three powered out a turn four Siege-Gang Commander. Moment's Peace bought him a turn to find his third land but Fujita's next turn yielded a Goblin Sharpshooter and a Skirk Prospector.

Hew was at thirteen and Fujita was able to finish him off by sac'ing his goblins and shooting him with the Sharpshooter.