Round 4: Justin Greenslate vs. Melyssa Mansur 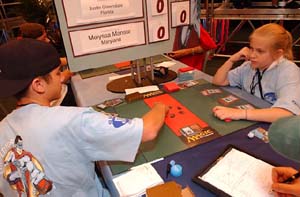 If this tournament were anything other than the JSS, it would only be a matter of pride. But when you add those loveable kids to the mix, pride and a good finish are hardly the most important factor. Both players sat down without a win through their first 3 matches, but neither was frowning. Maybe this is what Richard Garfield envisioned, instead of the cutthroat, tense, sometimes nail-biting action of the Professional Tournament.

Justin is from nearby Tampa, and only came to have fun this weekend. He was fortunate enough to win a Grinder yesterday, and has since seen his fortunes change. Melyssa drove all the way from Massachusetts with her family for this trip, although her nameplate says Maryland. The die was rolled, and Melyssa would be starting. 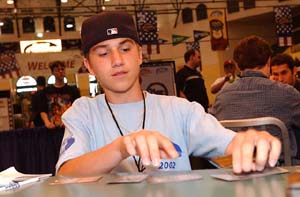 Melyssa is playing the all-too-familiar Psychatog deck, this version similar to Ryan Fuller's from San Diego Masters. She opened with a Nightscape Familiar, while Justin only played lands for the first few turns. Justin's deck was the hot topic only a few weeks ago, but has fallen somewhat to the wayside of late. He was running the Goblin Trenches archetype that first saw success in Europe, and later in Grand Prix Milwaukee.

The Familiar was Repulse'd before too much damage could be done, and was held back in order to play counter-magic, as Melyssa was missing land drops. Both players stalled on lands, Melyssa at 3 and Justin at 5. A few Prophetic Bolts were countered, and even a Psychatog went to the bin, but neither player was making progress. Eventually both players found land, and a counter war was fought over Goblin Trenches. 3 spells later, the powerful enchantment was in the graveyard. Each player was running low on resources, and a Wild Research hit play on Justin's side. The search ability was too much for Melyssa to keep up with, and 2 Fact or Fiction's later there was a Trenches on the table with a lot of land to feed it. Game 2 was ready to start. 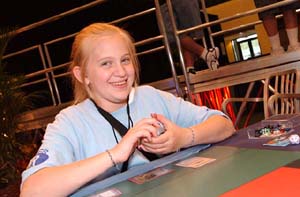 Melyssa again had an early Familiar, but Justin got down a turn 5 Trenches with the aide of Counterspell. Lands were sacked, and a timing misunderstanding led to an angry Familiar in the graveyard. Justin aggressively threw his lands away for a small army, in the hopes of racing the eventual Upheaval. He didn't quite win the race, but was able to Counter the Upheaval. Or at least he tried. Melyssa had a Counter of her own, but it left her without any more mana so she couldn't play a Psychatog afterwards. The Trenches came back into play after the Psychatog was Counterspelled, and a Fire and Urza's Rage ensured the victory for Justin.