Round 4: Kai Budde vs. Masashi Ooiso 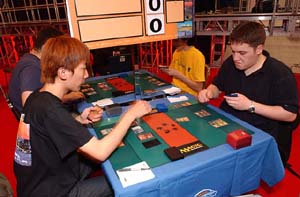 Rookie of the Year Leader Masashi Ooiso of Japan is in good shape to put even more distance between him and his rivals. His blue-red deck has given him a 3-0 start to the day. Now he faces none other than The Man himself, Kai Budde. Though he'd describe his green-black deck as "awful" the German Juggernaut has steered it to a 2-1 record. A win here would give him a big leg up to Day 2 and a potential Top 8.

Ooiso opened with Imagecrafter, and after Budde played a Birchlore Rangers on his second turn, showed him the Sparksmith.

He made a Wirewood Savage and passed it back. Ooiso cracked it with the 'Smith thanks to the Imagecrafter's help. He added a morph to the table. Budde had no fourth land and just a morph of his own. Ooiso played Spitfire Handler and cleared the way for an attack. Budde shrugged and played his fourth land and Stonewood Invoker. Ooiso bashed it and made a Flamestick Courier. Things were rapidly getting out of hand.

Budde's Heedless One was downright laughable as Ooiso deep-sixed it and the Rangers, piling on the damage. Not even Spitting Gourna could stand up to the mighty goblin, and Budde scooped.

Ooiso had a second-turn Sparksmith again in the second game, and Budde was not thrilled. He held back on three mana, and answered Ooiso's morph with one of his own. Ooiso showed him Flamestick Courier and tried to gun the morph down. Budde was ready with Vitality Charm. Ooiso swung in and Budde was happy to trade. 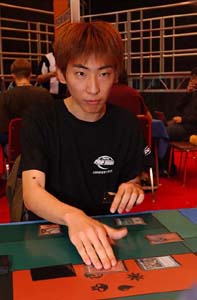 He played another morph, quickly shot down by Ooiso who added a Magma Sliver to his board. Needleshot Gourna gave him pause. He swung in with just the Sliver and Budde declined the block. Synapse Sliver joined his party. Things were getting desperate for the German. He made no play and gave it back.

Ooiso made a Mistform Wall and sent the Sliver again. He tried to punch through by turning his Wall into a Sliver and boosting the Magma's power with the Synapse, but Budde had Primal Boost for the save. Again Budde had nothing on his turn. Ooiso tried again, losing the Synapse and shooting for three with the 'Smith, but Budde had Tribal Unity. Glintwing Invoker gave him another 3/3 to smash into the Gourna.

Budde played out his hand of Wirewood Savage and Canopy Crawler. Ooiso chose not to shoot on his turn, giving it back to Budde after playing two morphs. When Budde cycled Gempalm Strider to save his Wirewood Savage after playing a morph you could see Ooiso's face fall. He untapped and took out the morph, then unmorphed a Plower to keep Budde off a second black mana. Unfortunately, he was at seven life, and Budde triumphantly flipped over Dirge of Dread and shoved his three men into the red zone, stealing the win.

Budde turned and addressed a nearby Randy Buehler, with an air of barely concealed menace, shaking his fist.

Buehler refused to take any heat for the development of that particular card.

Ooiso opened the deciding game with Goblin Taskmaster. Budde showed it the door with Vitality Charm on the next attack, and when no Sparksmith followed he breathed a sigh of relief. As did Buehler, who was ready to flee the Feature Match area if it showed. They paired off morphs, but the Ooiso spent his fourth turn flipping Mistform Seaswift and serving for three. Budde hit back for two and made a Wirewood Savage. 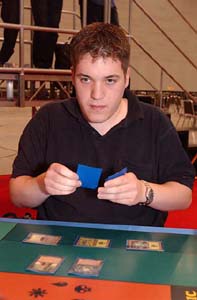 Ooiso played his fifth land and considered his options. He chose to hit for three and drop Glintwing Invoker. Budde sent both his creatures. Oosio blocked the morph. Budde let it die, then tapped five to bring out Noxious Ghoul, wiping Ooiso's side of the board. Ooiso could only smile and nod.

He rallied with Goblin Grappler and Mistform Wall. Budde cycled Dirge of Dread and Barren Moor, then hit for three and added Gempalm Strider. The Grappler served and provoked the Ghoul, signaling the Lavamancer's Skill that would soon enchant the Wall. He followed up with a morph. Budde dropped his seventh land and swung in with both creatures. Ooiso declined the block, and Budde dropped a twelve-point elbow thanks to Tribal Unity. It left Ooiso at one.

He still had the Skilled Wall, though, and that was doing a lot for him. He unmorphed his Plower and gave it back. Budde charged with both creatures. Both were blocked, and the Wall made sure that the Plower would survive. Budde triumphantly threw down Gluttonous Zombie, ready to win on the following turn.

Ooiso ripped Commando Raid. Budde couldn't very well block, and so his Zombie hit the graveyard. From there, the Plower and a Flamestick Courier made it quick.