Round 4: Katsuhiro Mori vs. Osamu Fujita 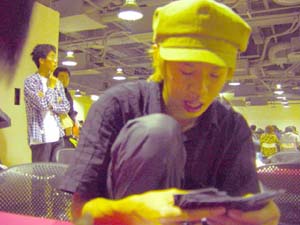 Katsuhiro "Flickering" Mori is always a spectator favorite in the Feature Match area. His blinding play speed combined with prodigious
skill and good humor make him a treat to watch. Last year's Rookie of the Year, he recently added another notch in his belt with a Grand Prix win at Nagoya alongside P.S.2 teammates Masashiro Kuroda and Masahiko Morita.

His opponent, Osamu Fujita was instrumental in getting him that Rookie of the Year title. Together with Itaru Ishida they were Anchans, and ripped up the Team Grand Prix circuit to help Mori get the pro points he needed. Now they face each other in single combat. Mori is playing green-white madness, while Fujita is running mono-black control.

Mori won the right to play first. He drew his opening seven and grimaced. They held a lone forest to go with uncastables like Tireless Tribe, Spurnmage Advocate, Wild Mongrel, Elephant Guide and Arrogant Wurm. He shuffled them over and over, refusing to put them back for six new ones. Ultimately he decided to roll a die for it. He wound up keeping.

Unsurprisingly, he missed his second land drop. He did find Sungrass Prairie to start putting out the men. First Spurnmage Advocate then Wild Mongrel. Fujita, with ample time to set up, Mutilated.

Mori "rallied" with Tireless Tribe and then another Mongrel after Fujita readied the Mirari. A copied Rancid Earth left Mori without land. He pulled another, but could make no play. A copied Mutilate left just the Tribe in its wake. then Fujita Sludged his hand and removed the rest of his board with a copied Mutilate. Mori packed it in. 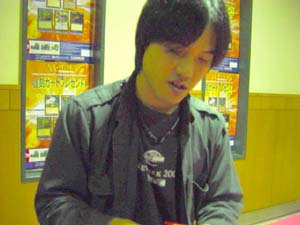 Mori came to his senses for Game 2 and mulliganed an awful hand. His reward was more of the same. He kept six with just Sungrass Prairie. He ripped two forests off the top and was off to the races. First came Tireless Tribe, then Arrogant Wurm, then Anurid Brushhopper.

Fujita's first play was on turn four, and it wasn't Mutilate. He had to Tutor for it. Mori's team hit him. He Mutilated for five, and Mori saved the Brushhopper. It swung and reduced Fujita to three.

Fujita tried his best. Rancid Earth took out the Prairie, then he dropped Butcher. Mori rescued, and in the process pitched Glory. He untapped and slammed down the plains to Glory through for the win.

Again Mori pulled a one-lander. He kept and drew into the second. His Mongrel, Rootwalla opening was looking good, but Fujita had Rancid Earth to turn land number three into land number two. Mutilate forced some pitches.

Mori failed to draw a land to enable Elephant Guide. He dropped Sylvan Safekeeper and watched Fujita Mutilate again. Stalking Bloodsucker showed up to clean up the mess, helped out by Skeletal Scrying for three.